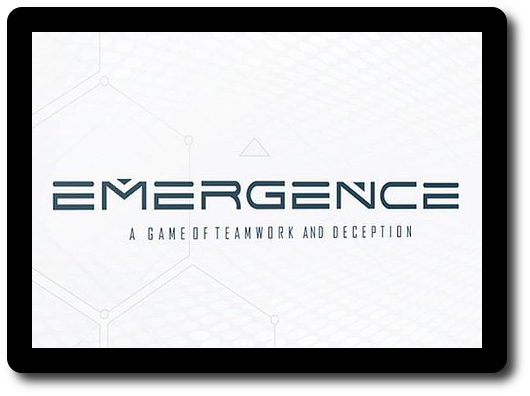 The future is a perfect place where logic reigns supreme and an artificial intelligence dominates all. Except for a pesky group of humans, this new utopia would be complete. It has been decided that the human element must be eliminated once and for all, but there is a problem. Knowledge is power and that power is freely available to the humans if they start working together. This does not compute.

To set up the game, first take the Game tiles and create the “City” in which the game will be played. Each City will have a different mix of Game tiles, but will always have 1 “Start”, 1 “Compile”, and 1 “Assimilate” Game tile. The construction of the City is up to the players, but the “Start”, “Assimilate”, and “Compile” Game tiles may not be adjacent to each other. A premade City is provided for the players’ first game. Additional preconstructed Cities can be found online at the game’s website. 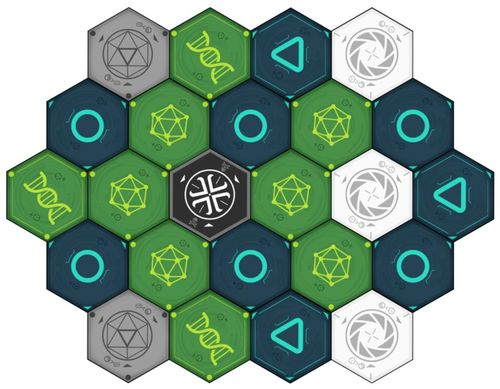 Third, give each player a Player board, 1 Agent meeple, and 1 Action marker.

Fourth, based on the number of players in the game, reduce the total number of Allegiance cards by type, shuffle the remaining cards, and deal 1 to each player. Players should look at this card, but keep it hidden from their opponents (who may or may not be friendly to the player’s cause). 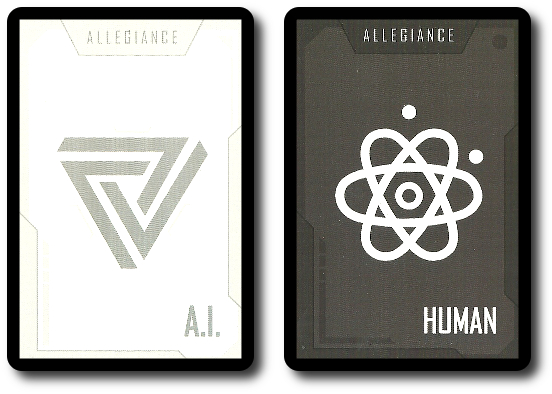 Fifth, all players should now set their Agent meeple on the “Start” Game tile and then close their eyes. One player will now tell all the “Human” players (based on their Allegiance card) to open their eyes and make eye contact with other players of the same allegiance. Then everyone closes their eyes again. When a few seconds pass, everyone can again opens their eyes. Only the “Human” Allegiance players now know who they are.

That’s it for game set up. Set the other game components to one side, determine who will be the first player (giving them the Leader token), and begin.

On the Hunt for Data

Emergence is played in rounds. During a single round of game play, the Lead player (the one holding the Leader token) will lead the round by first allowing all the players to determine their next actions in a set amount of time. This is referred to as the “Countdown”. During the Countdown (which is done verbally and loud enough for all the players to hear), all players select an action and an augmentation.

A player’s turn is made of two parts. Movement and action.

An Agent meeple may move to any adjacent Game tile. If other Agent meeples occupy the same Game tile, the player can only move their Agent meeple if their Action marker has the same augmentation. The only exception to this rule is the “Start” Game tile, which can be moved through freely.

Data blocks are one of two different types of “currency” in the game. Data blocks are picked up as an action either from a Game tile or stolen from an opponent. The player can “Compile” their Data blocks to convert them to another type of currency referred to as “Knowledge”.  The number and type of Data blocks converted determines the number of Knowledge tokens received. For example, three different Data block types can be turned into 4 Knowledge tokens. A handy reference card is provided to help make the process of changing data to knowledge easier. 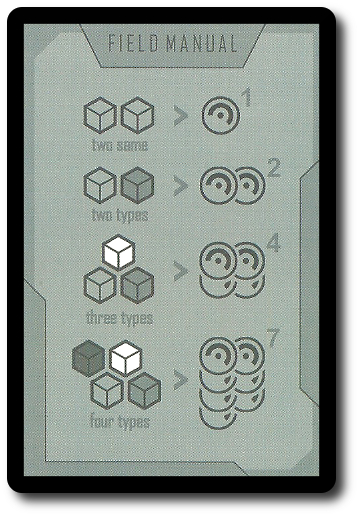 The game can end one of two different ways.

The second is if there are no additional Data blocks on the Game tiles. In which case, the game ends and the winners are the Human team.

To learn more about Emergence, visit the game’s website.

The Child Geeks understood the game but never really got into it. It’s important to note that they played the game very well, had no issues with the rules, and seemed to enjoy themselves a great deal while playing. When it came time to vote on the game, the Child Geek responses were decidedly mixed. According to one Child Geek, “I liked the game OK, but I didn’t really feel like I was running around a city or playing as a robot.” This is most likely due to the game’s abstract design. While the game’s backstory is very colorful and has many interesting ideas, the game’s visual presentation is very dull in comparison. Another Child Geek said, “I liked playing with my friends but I think the game favors humans.” This certainly seems to be the case for the first City map provided in the game and the Child Geeks were not the only ones to say so, as you will soon read. When the games were over, the Child Geeks agreed that the game was “OK”, but not overly great, resulting in a mixed endorsement.

The Parent Geeks also had no problem learning the game and getting into the game play. Like the Child Geeks, they found the abstract nature of the game to be a bit off-putting at times when it was clear that they were meant to imagine they were running around a City avoiding big robots and hunting for filthy humans. According to one Parent Geek, “A well-designed game and it has its fun moments. I just never really felt like I was attempting to deduce anything or that it even mattered that I hide who I was. I just played the best I could for my team.” This Parent Geek brings up a good point. While it’s possible to assist other players through your actions, the player is more or less on their own when it comes to collecting data and filling up the Knowledge Aggregator box. Another Parent Geek said, “I think the game is pretty great. Although I think it is a bit too abstract at times. I also think the humans have an easier time of it.” Again we hear comments about humans having an advantage. Like the Child Geeks, the Parent Geeks gave Emergence a mixed endorsement, finding it to be a fun game to play, but flawed in subtle ways that reduced the game’s overall level of enjoyment.

The Gamer Geeks were pretty brutal but fair. They found Emergence to be less about social deduction and more about teamwork. According to one Gamer Geek, “This is a game where it doesn’t matter if you hide your allegiance. It’s pretty easy to find out who is who and just share that knowledge because there is no reason not to.” Which is to say, the Gamer Geeks found that there was no “cat and mouse” game in Emergence. It was more of a team-based race. Another Gamer Geek said, “I’m not certain if the game is unbalanced or this City map is. It feels like the humans have a bit of an advantage.” Which might very well be the truth and we explored that by trying different City maps, but the overall impression was that the different victory conditions were not altogether balanced. When the games were over, the Gamer Geeks found small holes in the game, but nothing that led them to believe that Emergence was a bad game. Instead, they found themselves, like the Child and Parent Geeks, wrestling with how best to endorse it. They finally decided they felt lukewarm towards the game and gave it a mixed rating.

Emergence feels a bit awkward at first. Both A.I. and Human factions have the same actions and same goals. If you think you will learn anything based on what a player does or does not do on their turn, you will be disappointed. True knowledge is only gained if you look at a player’s Allegiance card, which is surprisingly easy. You don’t need to really “deduce” anything in the game unless you like guessing. Which, again, isn’t necessary.

Once players figure out who is Human and who is not, the game turns into little more than a race to collect resources. Which, is a different kind of fun. Instead of sneaking about like a rogue and keeping out of people’s way, players will find themselves taking on much more aggressive moves and attacking (in an abstract way) their opponents.

The collection of Data blocks and Knowledge tokens is fun until you know who everyone is. At which point, the Knowledge Aggregator becomes little more than a collection plate that is passed around for everyone to contribute to in hopes of reaching the finish line first. Pretty anticlimactic but also something that can be avoided. We saw several of our players split into sub-teams within their faction. While one team went about collecting resources, the other went about causing problems by stealing resources and terminating opponents. This is a very smart way to go about playing as a team and it saves the game from certain boredom.

Turns out that some of the balance issues our players felt were solved by playing different City maps. All players generally agreed that the Humans had an easier time of it and were more fun to play as, but the game itself was not unbalanced. Take this into consideration when you play your first game when using the default City map. It works great for learning the game but does not adequately provide the player with the full picture.

I cannot say I really liked Emergence, but I certainly didn’t dislike it. The game is well designed and balanced. I don’t think there is a lot of depth to it, but it does require the player to continue to reevaluate their strategy and supporting tactics. To a point. Once everyone knows who everyone else is, the game slips from deductive reasoning to flat-out team-based brawling. Luckily for you, the player, and the game, this transition feels natural and always seems to come at just the right time. Emergence is most certainly a game I will play when asked or when I’m with a group of 5 or 6 players. Give it a try. Emergence certainly appears to be a game you are going to either really enjoy playing or really enjoy giving away.