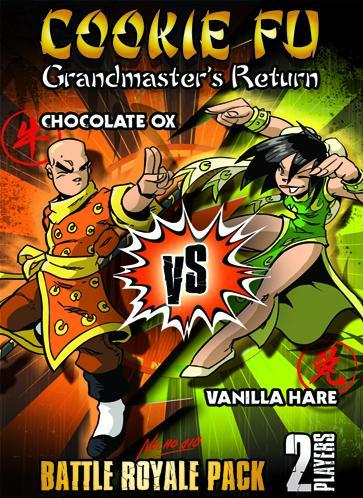 Cookie Fu: Grandmaster’s Return is a dice game where two or more players face off for an epic kung fu battle with over the top and fun combat moves. There are two levels of play for this game. The “basic play” and the “advanced play”.

This game is comprised of two different types of dice. The first is the Clan Fortune die which is used to determine turn order and provide a player with a slight advantage or disadvantage every round. The second is the Fu dice. These dice represent the different basic moves available to any player. When these basic moves are combined together, they can form powerful attacks and solid blocks. The Fu dice provide strikes, kicks, blocks, grabs, throws, and chi. The majority of those are easy to grasp, but the chi requires a bit of an explanation. If you roll chi, you get to use it to power mystical martial art energies to heal yourself, attack, block, or provide powerful cookie fu moves.

The Fu dice also represent a warrior’s different levels of mastery and provide the player with the ability to customize their warrior. This allows for players to make up for shortcomings and improve on specific strengths. This is essential as each Clan has moves they are particularly good at. For example, the Vanilla Hare Clan is partial to kicks. Caution must be used, however, as the players only have so many dice available to them. By strengthening one move, you inevitably weaken another.

The four different mastery levels of Fu dice are as follows:

Turn order is fairly straight forward in both the basic and advanced play. To begin with, each player rolls their Clan Fortune die. The results determine turn order (a la “rocks-scissors-paper”). In the basic game, the rolled results do the following:

In advanced play, the outcomes are the same, but the player also gets the possibility of obtaining or loosing fortune which provides or subtract chi points for that round. There is also a Clan result which is only used in advanced play and provides the player with the ability to use their Clans special move during that round. It also trumps the whole cookie, but not fortune.

Once the turn order is determined for the round, all the players roll their Fu dice, being careful to keep their results hidden. The round begins with the person who won the Clan Fortune roll making their first move. They can use all, some, or none of their dice. You get to pass up to two times. When you do, your opponent gets to take their turn. If any player should pass twice, the round ends. A player who has used all their dice must pass.

An offensive move always have a defensive counter. For example, a Strike can be deflected by a Block. A Kick can be deflected by a Grab. These are the most basic of moves and only require one die each. More complex moves will require more dice to power. For example, the Grab/Throw which does more damage than a Strike or a Kick. In addition, the combos can be stacked with other dice. The Grab/Throw can be stacked and be a Grab/Grab/Throw. This doesn’t do any more damage than the Grab/Throw combo, but it is harder to block. The defender would normally need a Grab/Block to deflect a Grab/Throw, but a Grab/Grab/Throw requires the player to have a Grab/Grab/Block to deflect.

Once a player uses the dice, they are spent and set aside and cannot be used again for the duration of the round. This requires the players to think very carefully about what moves they want to spend their dice on when defending and attacking.  Out of dice, out of moves.

When a player is unable to block an attack, they take damage. The basic game starts all players with 10 Health Points (HP). If a player’s HP should ever fall to zero or less, they loose the battle. The advanced game allows the starting number of dice and HP for the players to vary based on game difficulty.

That is essentially the game, but there are two important additional items that must be mentioned or I wouldn’t be doing this game any justice.

First, each game comes with a fortune cookie. Yes, that’s right. A fortune cookie. You are welcome to throw the cookie away if you like or eat it, but keep the fortune. The fortunes describe special Clan moves that are available to all players but cost warriors who are not members of the specified Clan one additional chi point to use.

Second, the entire game is tongue-and-cheek in its delivery. The rule book looks like a menu from a Chinese restaurant, the specialty move names are humorously titled, and the use of sound effects, shouts, and posturing is highly encouraged. The game itself is packaged in Chinese food to-go boxes, too. It’s the little details I love so much.

I have a thing for dice games. There is something about rolling dice, the feel of them in your hand, the way they sound when they hit the table, that has always made me happy. For me, using dice with a game makes me feel more part of it. Wherein the game itself becomes more interactive. As such, I can think of no better game device than dice when you are playing the part of a kung fu master battling it out with others.

When you roll the dice, the outcome is random. If this is where Cookie Fu stopped, I don’t think it would be all that good of a game. Randomizing is a great way to make things always fresh, but if you forced the players to use the random results as locked outcomes, I don’t believe anyone would buy into the narrative that they were martial arts experts.

What Cookie Fu does right is give the players choice. The player must choose how to use what was given to them in a way that is both offensive and defensive in accordance to how their opponent behaves. I love this mechanic. It implies that you, a master of the martial arts, are capable of fantastic moves, but you are only able to pull them off if the conditions are right. Those conditions are determined by what your opponent does and how you strategically use what you are given. Throw in some fighting sound effects, and you’ve got yourself a fun little strategy and tactics game.

This wasn’t lost on my oldest. He immediately understood that the dice all represented potential, and he got to decide how to use them. He also quickly learned that simply reacting to everything wasn’t going to get him very far. He had to take chances and let the occasional kick and punch strike him so he could open his opponent up to his own attacks. This risk vs. reward thinking is tricky for a 6 year old. Mostly because he was so focused on winning, he couldn’t see the forest for the trees, so to speak. In a few brief rounds, however, and he started to get the “big picture”. Almost effortlessly, he started to judge the possible risk of each attack I dealt and began to weigh it against any rewards it might allow him to benefit from if he didn’t take any action to stop the attack.

What will slow this game down is the need to memorize all the combinations that you can use during the game. I suggest writing them down on a cheat sheet for new players. The basic moves are not that difficult to keep organized, but when you start doing combos and chi moves, things can get a little confusing. In some games, this might be a huge hindrance, but in regard to the theme and narrative of the game, this works out pretty well. It is implied that every player is a student of the martial arts, but not all student are equal in their adeptness. A player who can memorize all of the combos early will be a stronger player as they will instantly recognize all of the possibilities available to them based on their dice roll. For those players who are not accustomed to dice games or are having a hard time keeping track of the different combinations, they might only see the most basic of moves which is blocking, punching, and kicking. Through practice, however, they will become better warriors and make better decisions as players.

This is not a negative against the game. I actually find it to be a clever way to make the game more interesting. All the players have the same dice which means they all have access to the same thing. Luck plays a part in what is rolled, but memorization and logical decision making will make even a weak roll of the dice useful.

In conclusion, I really like this dice game. It is fast, easy to teach, and easy to play. You can sit down with a friend or up to 5 other people and have several battles in less than an hour. Not many games provide speed and entertainment with a high level of customization. Cookie Fu delivers with a solid punch of awesomeness.