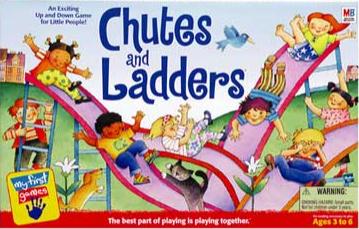 This classic children’s game has players move their cardboard game piece up a 10×10 grid of ascending numbers in order to reach the winner square at 100.  This game has had many incarnations, but originally thought to have been based on a game from India to teach children the pitfalls of morally bad choices.  It was known as Snakes and Ladders in England before Milton Bradley picked it up in the US with the branding we know as Chutes and Ladders.

Game concept is simple. Players take turns spinning to see how many spaces to move between 1 and 6.  If you land on a space with a picture, then you may either get to follow a ladder up to a greater number, or possibly forced to take a slide backwards.  Ladders represent the rewards of positive behavior, like walking the dog or helping a sibling.  Slides represent the consequences of negative behavior, like stealing from the cookie jar. Eventually somebody gets to 100 and wins the game.

My kids love this game, I think, primarily because it has a spinner. I do not.

My first criticism is some of the game’s mixed messages. For a game that is supposed to be teaching consequences and rewards for positive and negative behavior through images, it can be difficult to decipher some of the messages on the game board. For example, the player takes a slide down because they land on an image of a child reading what looks to be a history book, except if you look closely, you can see he has a comic book hidden inside. Come on!! For the age range of kids playing this game, how does this apply even in the slightest? If a 3-4 year old is pulling this off, he should be rewarded, not punished.

My second criticism is the wide variability of game play. A single game session can cycle mercilessly sometimes. It is theoretically possible to never end the game by hitting the 3 slides on the top row over and over again until you nail the big slide down to the bottom. This prompted me to do a small bit of research about the math behind the game.

The game can be entirely represented mathematically as a Markov chain, and therefore one can very easily run the numbers. Here they are, for anyone geeky enough out there to care about the math:

My last criticism is the game piece movement on the board. Due to the wraparound nature of the row advancement,  my sons frequently forget which way they are moving on the game board. In everything else, we teach them to read top to bottom, and left to right, but this game board breaks those rules.

The only redeeming quality of the game is that it does teach counting, numbers, and rudimentary addition. It is helping my kids with numbers up to 100 and so for that I cannot give the game a complete fail.