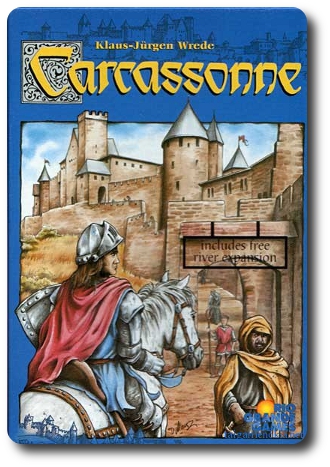 Carcassonne is a classic tile-laying game designed by Klaus-Jürgen Wrede, published in 2000 and Spiel des Jahres winner the following year. It has spawned dozens of expansions, variants, and compilations and is available as an application for iOS and Android.

The game components are:

The game begins with a fixed starting tile (to seed the landscape). Players take turns drawing a single tile, then placing it orthogonally adjacent to an already-placed tile. Adjacent tile edges must match features depicted on those edges – clear fields, roads or cities – thus creating features spanning multiple tiles. After placing the tile, a player may place a meeple atop one of the landscape features depicted on that tile, so long as no other meeple appears within the same feature. For example, if I play a tile with a road on it, I may choose to place one of my meeples on the road, so long as there are no other meeples, not even my own, on the same road. These meeples are referred to as robbers, knights, monks or farmers, depending on whether they are placed upon roads, cities, cloisters or fields, but these labels are not at all important to game play. 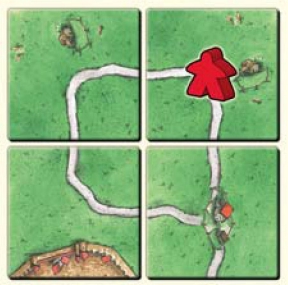 After that, meeples upon completed roads and cities – those that no longer extend to any free tile edges – score points and are returned to their owners. Meeples on roads score 1 point for each tile the road spans. Those on cities score 2 points for each tile the city spans (with bonus points if the city tile contains a pennant symbol). At times, there will be more than one meeple on a single feature. This occurs when two or more incomplete features later become joined. When the feature is completed, the player with the highest number of meeples scores points and everyone else misses out. If there is a tie for first, all tied players score full points.

Fields are also different in that they are never considered completed. Farmers will only score points at the end of the game.

The game ends when all tiles have been placed. Meeples on incomplete features score points for those features, the same as during mid-game with the exception that incomplete cities only score 1 point per tile. Meeples in the fields score 3 points for each completed city that field is adjacent to.

You can grab a complete copy of the game rules from Carcassonne Central, a site dedicated to the game and all of its expansions.

My children have been playing Carcassonne on the iPad for over a year, and loving it, so there it is no great feat for me to “predict” that they would enjoy playing a physical rather than digital incarnation. Apart from a 2-player-only version called Carcassonne: The Castle that I have had since 2005 and not played much, it was only last year that I acquired a more conventional version, Carcassonne: 10 Year Special Edition. This version comes with translucent plastic meeples and is packaged in a meeple-shaped box, with a meeple-shaped scoring track. It also includes some extra tiles. The components are okay, although the box lid is rather flimsy due to the awkward shape and mine is coming apart at the seams.

For all the advantages of the digital version – portability being the most salient, but not having to shuffle the tiles comes a close second! – it is nice to play with physical components. Besides the tactile experience of handling game components (often mentioned by other commentators, although I think that’s overrated), it is far more comfortable to sit around a table without having to squint or crane one’s neck to follow the action. The digital version plays more quickly, but there is nothing wrong with playing at a relaxed pace; indeed, playing any game under time pressure is a recipe for disaster, a mistake I have made too often already. My 5-year-old daughter takes particular delight in counting out her score manually on the track, rather than having the iPad do it automatically for her. Apart from this, my children do not have a clear preference for either the digital or the physical version, using one as often as the other. I have a slight preference for the physical version, but considering that I spend so much time away from home, online gaming with my children is likely to become a more regular occurrence.

Sound play requires a combination of cashing in on short-term gains and playing the long game. Knowing how to compete for control of a high-scoring feature is a key strategic concept. If a player commits all his meeples too early, he will have none left to score quick and easy points later in the game. This is especially true for farmers (in the fields), as once placed, these can never be retrieved. On the other hand, scoring from fields can be extremely lucrative in some games, so beware letting other players claim control without a fight. Another rookie mistake is to build up a massive city that is only worth half points if never completed, especially since other players may either sabotage your efforts to finish it or swoop in just before it is finished and share in or steal the points from you. 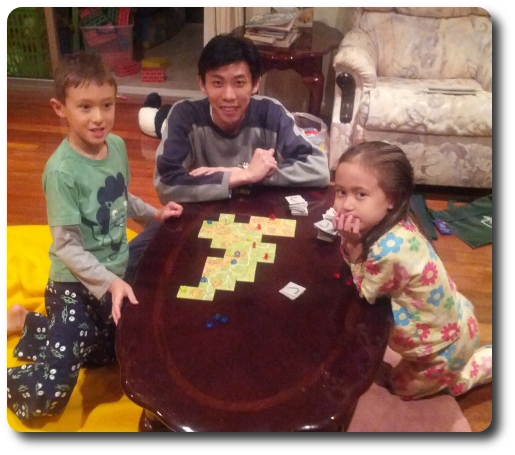 Playing the game with their favorite baby sitter

I know many Gamer Geeks who enjoy Carcassonne, even to the point of playing in tournaments. I have no doubt that good strategy is more important than good luck. That said, I consider vanilla Carcassonne (i.e., no expansions) to be more of a “gateway game” to entice newcomers to the hobby; just a little too simple for my tastes.

As a Parent Geek, though, I love playing this game with my children, particularly as they have an excellent chance of beating me. Just because I complain that it is simple doesn’t mean that I am a good player! It will certainly remain a fixture in my collection.  Indeed, I plan to “upgrade” to a Big Box edition that includes the base game and several expansions.

Child Geeks will love creating a sweeping landscape from almost nothing. Most will come to terms with the rules and strategy quickly, except perhaps for the farmers. There are two obvious solutions for children struggling to play competitively. One is to simplify the game by dispensing with the farmers altogether. Another is for stronger players to play with fewer than 7 meeples, and thus with more limited scoring opportunities.