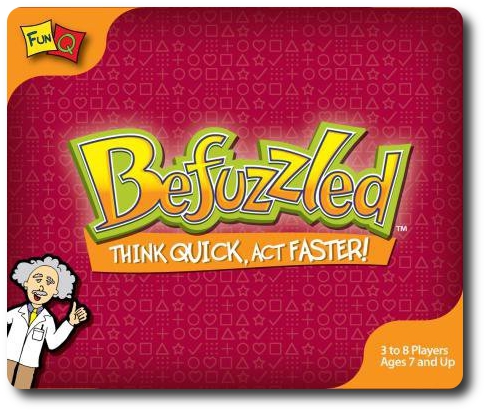 In Befuzzled, all the players are attempting to correctly complete one of possible eight action before the other players do. The players must use their memory and pattern matching geek skills in order to compete and then beat the other players to the punch…or quack…or hand clapping; whatever the action might be! Hilarity will ensue as players blurt out incorrect answers, take incorrect actions, and get excited as they race each other to be the first to complete action. Think quick, act faster! Buffuzzled will keep everyone at the family gaming table on their toes and laughing out loud!

Befuzzled is comprised of 40 Flip cards, 24 Action cards, and 8 Shape cards for a total of 72 cards. The card backing for each card type is clearly marked making it easy to divide the three groups before the game. The cards themselves are the typical thickness you’d expect from a card game and durable enough to withstand many hours of game play. The text and illustrations on the cards are easy to read and clear. The instruction booklet is well written and will get the players up and running in no time. All in all, a quality game. 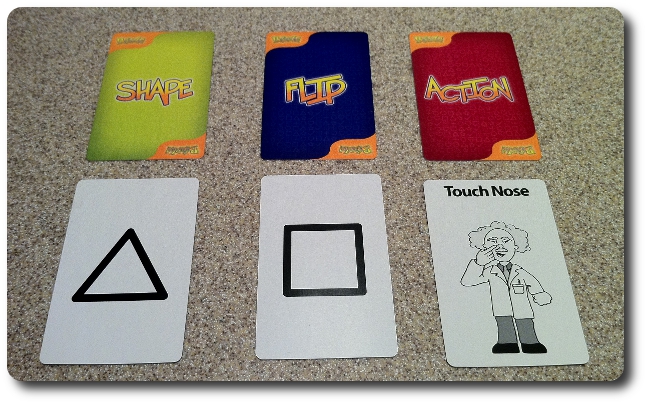 The three different card types, front and back

Game set up is quick and easy, which is fantastic, as the game set up is repeated up to five times. First, divide the three groups of cards (Flip, Action, and Shape cards) into three different piles. Shuffle the three piles separately. From the Action pile, deal (face up) 8 cards, arranging them in rows that allow all the players to easy read the actions noted on each card. Set the rest of the Action cards aside for the duration of the round. From the Shape pile, deal (face up) 8 cards, arranging them so the action text of each card is visible and the shape is clearly attached to the action card itself for quick visual association (see following image). Third, count out a number of Flip cards equal to 5 times the number of players in the game. For example, 3 players would need 15 Flip cards (3×5=15). Set the rest of the Flip cards aside for the duration of the round. You are now ready to play the game! 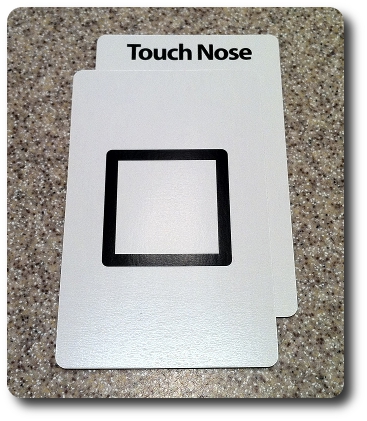 Befuzzled is played in turns and rounds. A single turn involves the players racing to complete the randomly selected action correctly using the Flip cards. Turns are taken until all the Flip cards have been played. Once all the Flip cards are played out, the round ends and you repeat the game set up. A total of five rounds are played in a single game of Befuzzled; however, fewer rounds can be played to reduce the total play length of time it takes to complete the game.

There are two types of players in the game: the Judge and, essentially, everyone else. The role of the Judge changes every turn, passing to the player to the previous Judge’s left. The player who is the Judge draws the top card from the Flip pile and looks at the card without showing it to any of the other players. The Flip card will show a shape that will match one of the 8 shapes associated with an action visible to all the players at the table. The Judge should take special care to note of what action needs to be completed without giving away that action card in their hand.

When the Judge is ready, they reveal the card in a way that makes it visible to all the other players at the same time. Once the players see the shape on the Flip card, they must complete the action correctly and faster than anyone else. For example, if the action associated with the shape is “Quack like a Duck”, a player needs to say “Quack!” before the other players do.

The Judge watches and listens to the other players closely to determine which player completed the action correctly first. The Judge then awards that player the Flip card and jeers and cheers from the table quickly follow. The player to the Judge’s left becomes the new Judge, selecting a Flip card, and repeating the process described above. Once all the Flip cards have been dealt, the players count the number of Flip cards they were awarded during the Round and earn 1 point per card. The total is added and recorded using a piece of paper or other score tracking device.

If this is the final round of the game, the player with the most points wins fame and glory!

My little geeks love party games, especially those where they get to act silly. For example, in Reverse Charades the get to wiggle, jump, and act crazy. Until I became a father, I all but lost my taste for party games, preferring to spend hours thinking through strategies and tactics while managing resources and multiple actions per turn with the more elitist Euro games. Having kids changed all that. There is just something about the energy, creativity, and enthusiasm little geeks bring to the family gaming table that makes you want to be a kid again, too, and join in whatever they are doing.

When I explained Befuzzled to them, my two oldest little geeks immediately understood the game and what they had to do. They were very eager to start and my oldest rolled his eyes at me when I insisted I at least go through the game rules once. Ah, the impatience of youth…

My only real concern with the game is how it will play with my 4-year-old little geek. He is just now starting to recognize words but is by no means a “reader”. He’s sharp as a tack when it comes to memorization, however, and I’m hoping that he’ll be able to hold his own with the game play. Even if he just remembers half of the actions (4 cards)  and their associated shapes, he’ll be able to compete with his older brother. He is significantly younger than the recommended age and not as strong yet with the essential Geek Skills necessary to play the game well. He’ll have something of a mountain to climb.

After explaining the rules, giving several examples with the cards, and asking if there were any questions (to which the answer was a loud “NO!” from both boys), I set up the game for play. While doing so, I asked each of my little geeks their thoughts based on what they know of the game so far.

“I really like the different actions. There are a lot of fun things for me to shout and to do!” ~ Liam (age 7)

After I stopped laughing from my son’s very loud, full-bodied pirate impersonation, we started the game.

As expected, both of my little geeks understood the game and what they needed to do to play. My 7-year-old loved the game and did very well. My 4-year-old did not do as well, as I assumed, but not for the reasons I originally thought would be an issue. He didn’t focus on memorizing the cards whatsoever because he was having too much fun watching the other family members act silly. Even though he never won a single card, I would guess that he had the most fun out of all the players. Which, in the end, is really the point. Having fun should always be the goal. 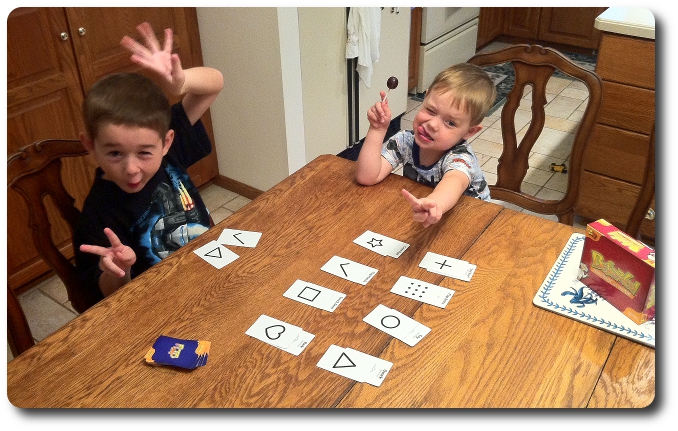 My little geeks don't need an excuse or a game to act silly...

Because of my 4-year-old’s experience, I completely agree with the game designer’s suggested age range. At 7 years old, my little geek was looking at the table far too often, but he was able to focus which made up for lost time. At age 6, I don’t think he would have been able to hold his own during the game. I do wish, however, that the actions were illustrated a bit more. As the cards are today, the illustration of a professor looking cartoon explains what the action is. I think it would be easier for little geeks (and for other players) if the action also depicted an image that showed the action. For example, the action “Quack like a Duck” could show an illustration of a duck. If this was done, I imagine my 4 year old could have had an easier time playing the game.

Gamer Geeks will not get much out of this game other than a chuckle. Like most party games, with very few exceptions, the focus is on the social interaction and not on the game play, strategy, and tactics. I can see this game being played by my gaming group of elitist gamers as a very light filler or a pre-game warm-up, but not much more.

Parent Geeks are going to love playing this game with their family and friends. With their family, the game encourages fun and laughter. Multiple generations can sit at the table and play a game without much set up, almost zero downtime, and lots of fun table conversation. With their friends, the game is an excellent social experience with non-gamers who like a good party game. Throw in some wine and cheese, and you’ve got yourself a fun evening.

Child Geeks, like the Parent Geeks, are going to have a great time with this game, too. As I have said, the game promotes fun and wackiness. While the lightness of game will not appeal to the Gamer Geek, the game is perfectly balanced for little geeks up to grandma and grandpa geeks, too.

Befuzzeled is a fun and fast party game that will be enjoyed by the family and at social gatherings. Light rules, fast game play, and fun social interaction create a wonderful experience full of laughter.

One Response to Befuzzled Game Review