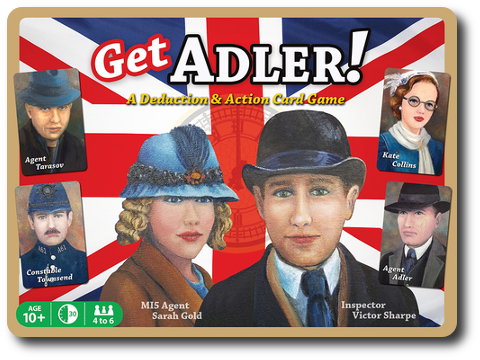 In the world of espionage, trust is a commodity in short supply. Even supposed friends and allies could be double-agents. Some agents go so deep undercover that they no longer can tell truth from fiction. But no one can live a lie forever. Eventually every spy slips up. The trick is to be observant enough to divide fact from fiction.

Get Adler!, designed by Randy Thompson and published by Caper Games, is comprised of 6 Character cards, 4 Special Ability cards, 90 playing cards, 6 reference sheets, 7 Time tokens, and 1 Turn token. The cards are as thick and as durable as your standard playing card. The tokens are made of solid cardboard.

To set up the game, first shuffle the Character cards and deal 1 to each player, face-down. Players should keep their Character card a secret until they are forced to reveal them. Give each player a reference sheet at this time, as well.

Third, place the tokens to one side of the game playing area.

That’s it for game set up. Determine who will go first and give that player the “1 o’clock” Time token.

A Game of Deduction and a Little Talking

Get Adler is a deduction game, meaning players are attempting to learn information about their opponents. This is done by asking questions and observation. Table talk is not encouraged, but a bit of banter is considered necessary to keep the game fun. In all cases, a player is to never speak of what they know. In addition, all players who are not the double-agent, Adler, must always tell the truth. The player who is Adler can lie through their teeth from the very first play to the last if they so wish.

The Chase is On!

Get Adler! is played in 7 rounds. During a single round, each player will have 1 turn. A player’s turn is summarized here.

The player draws 1 card from the draw deck and adds it to their hand.

The player now selects 1 card from their hand and plays it to the discard pile, face-up. Depending on what the card is, the player will take a specific action. Some cards provide no action whatsoever.

This card, once played, allows the player to ask any opponent 1 “Yes” or “No” question. Since the goal of the game is to find the missing double-agent, Adler, the player should ask questions that help them learn the identity of their opponents. Using the reference card, the player can begin to piece together which player has which Character card. 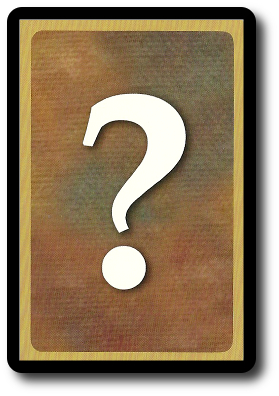 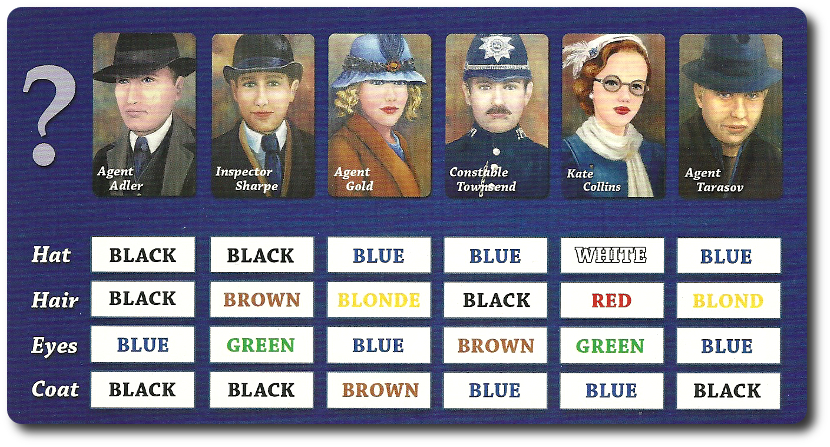 This card allows the player to look at the hand of any opponent. 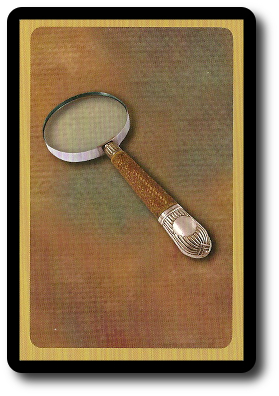 This card allows the player to take 1 card at random from an opponent and replace it with one card from their hand. 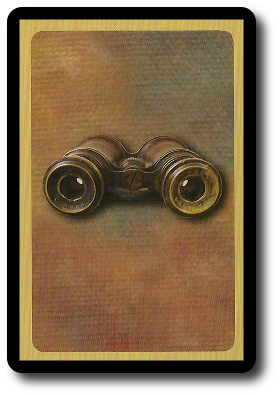 This card is needed by the player who is Adler. All other players must attempt to keep them out of Adler’s hands! 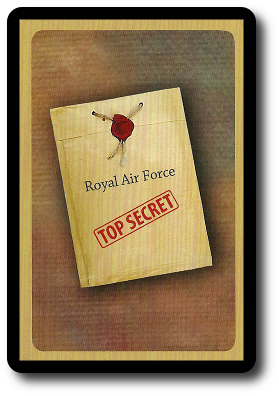 This card is placed in front an opponent who the player believes to be Adler. 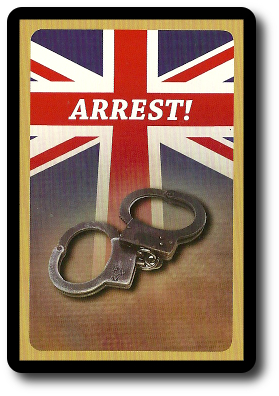 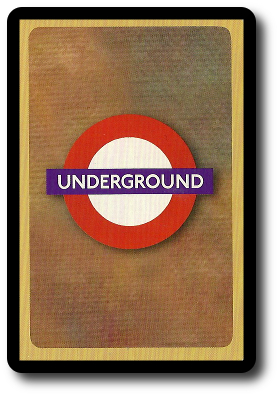 A Bomb will not only allow Adler to escape, but will also cause all the other players to miss a turn! 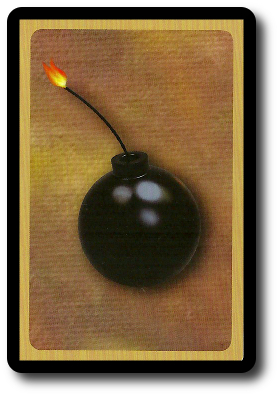 A quick Disguise will hide Adler in the crowd, making him impossible to capture. 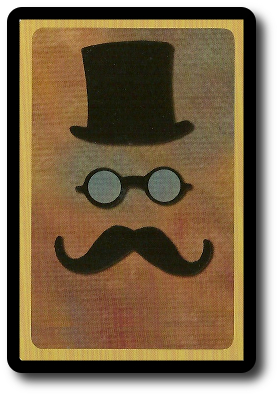 If a Pistol is drawn, both Adler and his opponent will have a shootout until one of them runs out of bullets (i.e. Pistol cards). 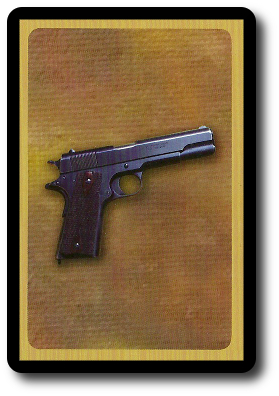 Getting Adler or Adler Gets Going

The non-Adler players win if all the villains and Adler are arrested or eliminated from the game before it ends (before the end of the 7th round).

The Adler player and the villains win if he evades capture by the end of the 7th round and is in possession of at least 1 Top-Secret Document. Adler can also win if all the hero players are out of the game.

To learn more about Get Adler!, visit the game’s web page.

The Child Geeks enjoyed the process of deduction through card plays much more than I thought they would. They also learned how to play a lot faster than expected, too. According to one Child Geek, “The game is easy. It’s finding out who Adler is that’s the real trick. Especially when the Adler character can lie every time you talk to them.” The games quickly became an exercise in discovering who Adler was and then closing in on the kill. A much easier process in theory than in practice. According to one Child Geek, “Once you know who Adler is, it’s easy to get to them, but it always seems that the Adler character can get away just in time.” Which is to say, Adler is slippery. This only enhanced the game play from the Child Geeks’ point-of-view resulting in a full endorsement of the game.

The Parent Geeks were also pretty happy with Get Adler! and played a much more sophisticated game of cat and mouse. According to one Parent Geek, “A neat little game. I like how every card tells you something about the other player, or maybe not. It’s up to you to decide and to think about.” Another Parent Geek said, “Lots of fun. I like being the Adler character the best, but it is a lot of fun to be on the other side, too.” When played with the family, Get Adler! was a big hit. When played with just their peers, the game was just as well received. In fact, the only time the game fell to the floor is when a new player didn’t understand the rules well enough and didn’t think to ask questions. This lead to some problems as they, being Adler, thought they had to tell the truth! Which isn’t correct. Not correct at all. Adler can and should lie often to keep everyone guessing. What the Parent Geeks didn’t guess about was their recommendation. Without hesitation, they endorsed the game.

The Gamer Geeks liked the game, but were not overly thrilled by it. As one Gamer Geek put it, “The game is solid, is fun to play, and does its job. I don’t know…it’s just something about how the cards are played to get Adler that leaves me a big ‘wanting’ in the game play department.” When I dug deeper, a few of the Gamer Geeks thought there should be a better way to capture Adler and with a bigger penalty if they were wrong. For example, “forced arrest”, which would take the player who is arrested and the player making the arrest out of the game for good if the arrest was false. But this point of view wasn’t shared by the majority of the Gamer Geeks. For the most part, this group of elitists found the game to be entertaining, thus resulting in them giving Get Adler! their full endorsement.

Get Adler! is a fun game, but only if you are playing it with the right people and the person playing Adler gets into their role. What is not discussed in the rules and is only visible during game play is how much fun it is to be the traitor in the mix. Since Adler can lie, they can put a lot of thoughts into their opponents’ heads. But this is tricky business in and of itself. A player does not want to draw too much attention to themselves, but they do want to subtly share with others what they think they know. This is where the card plays come into their own. Play the right card with a wink and a nod and you can either throw the game in your favor or throw it completely out of whack. Now that’s fun.

If you are looking for a fast paced deduction game, where the traitor is playing at your table (and might even be you), and no one really knows anything until the last possible moment, then do play a game or three of Get Adler! It’s a classic case of fox versus house, where the fox is one sly player.