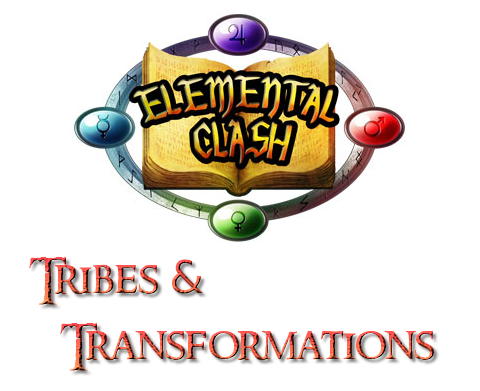 A mage is nothing without their magic, this is true. But it’s also true that a mage can be so much more if they had an army. Across the lands and in the seas dwell creatures who are willing to pick up their weapons and march for you into war. All you need to do is give the command and your foes will be crushed under your forces.

Elemental Clash: Tribes & Transformations, designed by Andreas Propst and published by AP Games via the Game Crafter, is comprised of 9 expansions. Each can be added to the base game with ease. Obviously, the base game is necessary to play, but it’s not necessary to combine all of the expansions. Players can pick and choose from the very start, and since Elemental Clash is not a collectible card game, a player can use as many or as few cards as they like and still enjoy a complete gaming experience. The artwork is superb and each expansion brings its own uniqueness, further enhancing the game without ever upsetting its balance or level of difficulty.

Note: The expansions listed here can all be purchased separately, but are collectively being released under the title of “Wave 1” to celebrate the 10th anniversary of the game.

The first wave of expansions focuses on different factions in the magical world the game is set in and a new approach to dominating the battlefield. Each of the expansions is summarized here. 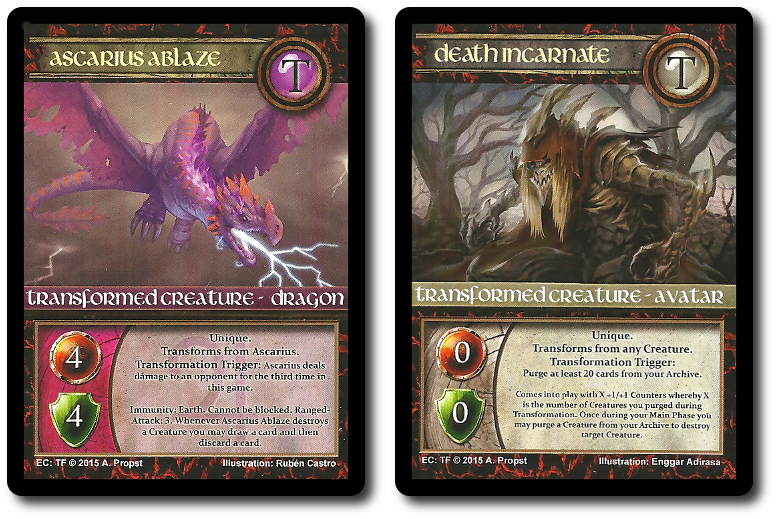 Comprised of 51 cards, this expansion introduces us to the Albs, an elf-like race that dwell in a primordial forest. They commune with all living things and coexist in peace. As warriors, they are brave and cunning, using the trees to both launch their attacks and avoid their enemies. 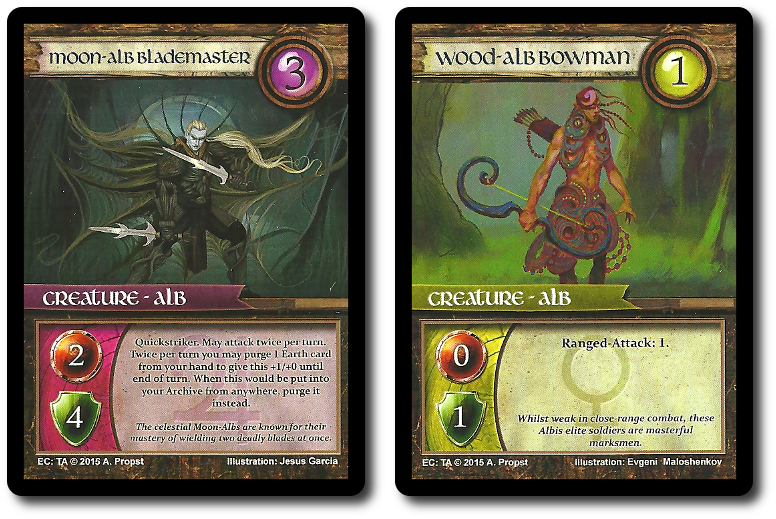 They also have a dark side. The deeper you go into the forest, the older and larger the trees become. The light of day is gone and the forest is locked in a perpetual twilight. Her the Moon Albs dwell. Like their cousins, they are honorable and highly skilled warriors, but they trust few. They will seldom help others and they keep their secrets safe. But be they in the light or forever in darkness, the Albs have learned to transform they bodies to meet any challenge, giving the player access to unique Creature Transformation cards.

Comprised of 36 cards, this expansion calls forth the mighty forces of the Geldronian Empire to serve the player’s needs. The Geldron Empire is the largest Human kingdom and has a rich history of brave knights, mighty siege weapons, and noble lords. They are well-armed and highly organized. Each soldier knows their part and the engineers behind the siege engines only wait for the player’s command to let lose their barrage of destruction. 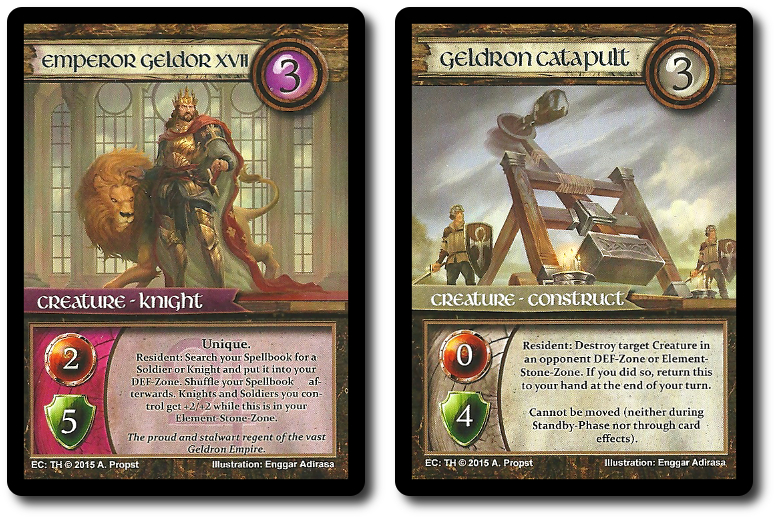 Comprised of 27 cards, this expansion lets loose the Beastfolk, a collection of giants, satyrs, centaurs, and beastmen all under a single banner of war. They are brutal, quick, and deadly. Their allegiance is given to the strongest among them, meaning a player must be ruthless if they are to control their own army of Beastfolk. But the risk is worth it. Other than their strength, the Beastfolk have a special ability known as “Tribal Bond”. The process is difficult to describe, but not the result. When the Tribal Bonding is completed, two or more Creature cards are fused into one giant abomination. Bonded Creature cards are no longer single entities. They are all part of a larger whole and that can be a lot of trouble for the player’s enemies. 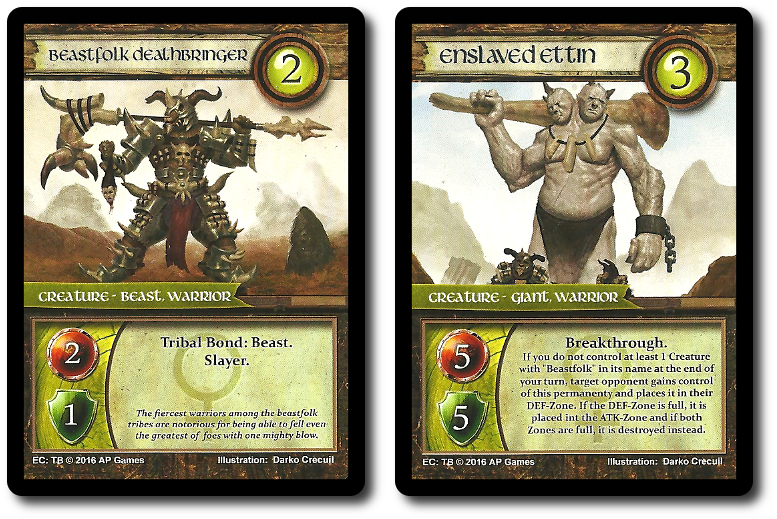 Comprised of 33 cards, this expansion focuses on the reptilian civilization that dwells in the dessert. The saurian creatures have grown accustomed to the brutal climate and have developed an uncanny healing ability that has kept them safe for generations. The secret to their long life and healing is the result of the saurian Priests and Lords using necromancy. A sharp-eyed observer will notice that a wounded saurian does not heal as normal, but their body hardens and dies where the wound was suffered. Harsh, but it allows the player to control a saurian army that respawns when they fall and become even stronger in death. 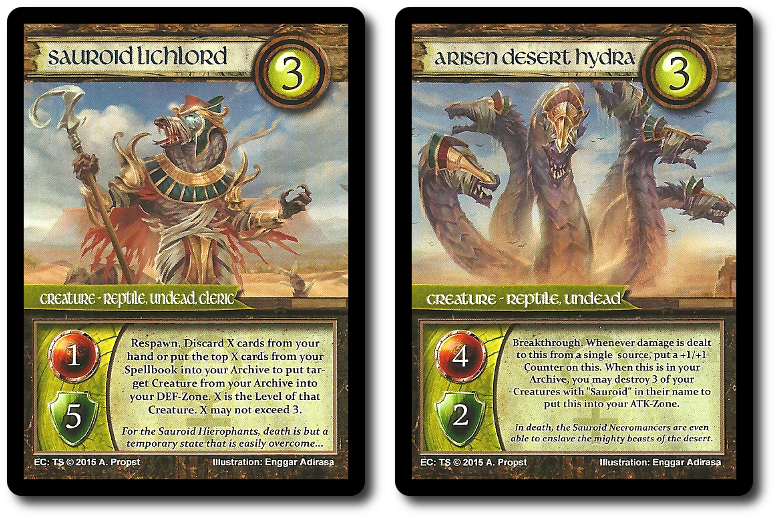 Comprised of 42 cards, this expansion provides new Spells and Creatures to control. The denizens of the deep are cruel and their blades are sharp. They dwell below the waves in dark places where even the strongest creature must fight for their life at all times. What makes such creatures appealing is their ability to mutate. This ability to change shape and form at will is necessary in the deep where survival depends on speed, strength, and resilience. In game terms, the player can remove 1 Creature from play and replace it with something larger and stronger. Very handy when you want to get the upper hand. 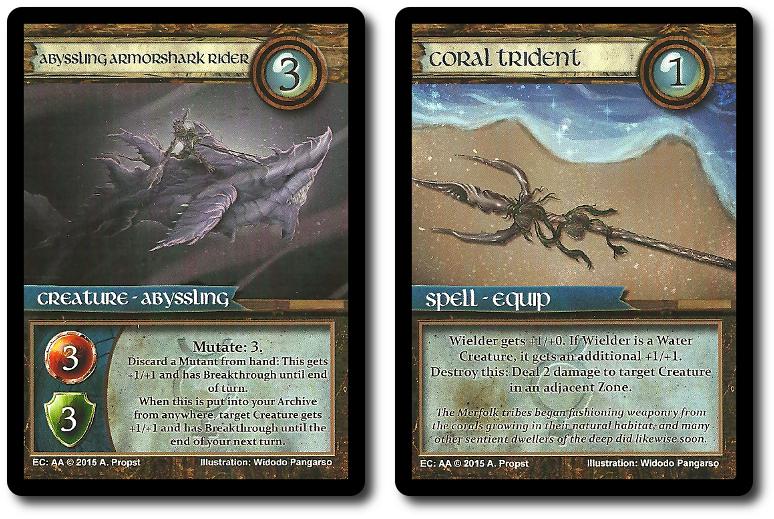 Comprised of 72 cards, this is one of the large expansions that includes new Creature and Spell cards. The dwarves are a hardy people, quick to laugh and even quicker to swing a war hammer. They are gifted engineers, blacksmiths, and miners. They can build blades that never dull and the legendary weapons that can fire small and large pieces of metal. They dabble little in spellcraft, but they have learned to weave magic into all they create, strengthening it with elemental magic. Dwarves are a powerful ally and they will serve the player well. 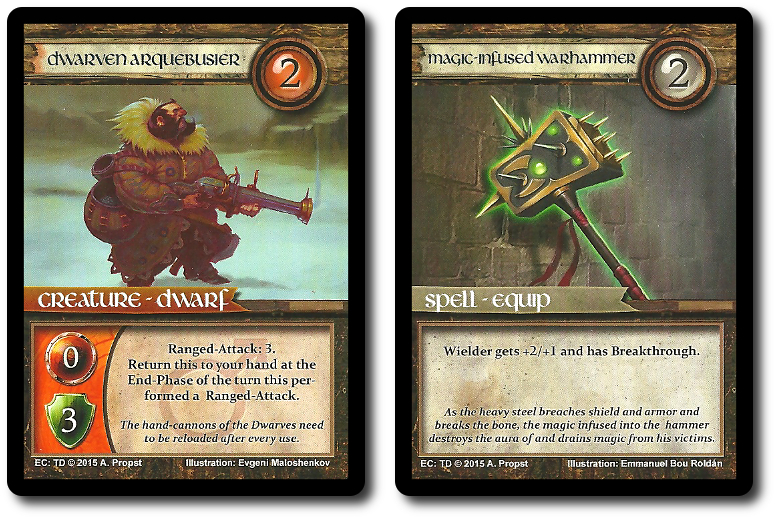 Comprised of 30 cards, this expansion brings magic to life in the form of Elementals. All of the elements are represented. From the common element of water to the rare and terrifying element of death. Life and death is represented here and it can all be commanded by the player. But as cool as that sounds, the real benefit of commanding an army of elemental creatures is their ability to share and support one another. Each Elemental provides all of the other Elementals a bonus, making an army of Elementals an unstoppable force. 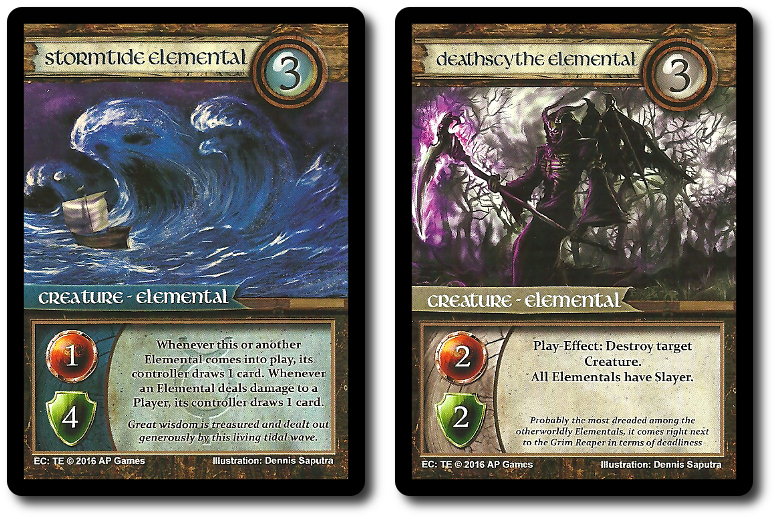 Comprised of 36 cards, this expansion introduces the Orcs. New Creature and Spell cards are at the player’s disposal, giving them the ability to command some of the toughest and most feared warriors in the land. A player will want to make use of the Orcs’ ability to not only attack at a target, but to attack so viciously as to damage the player’s opponents. Orcs are unruly and smelly, but you cannot ask for better warriors. Dull of wit, but quick to anger, the Orcs are to be feared, respected, and used to conquer the kingdoms. 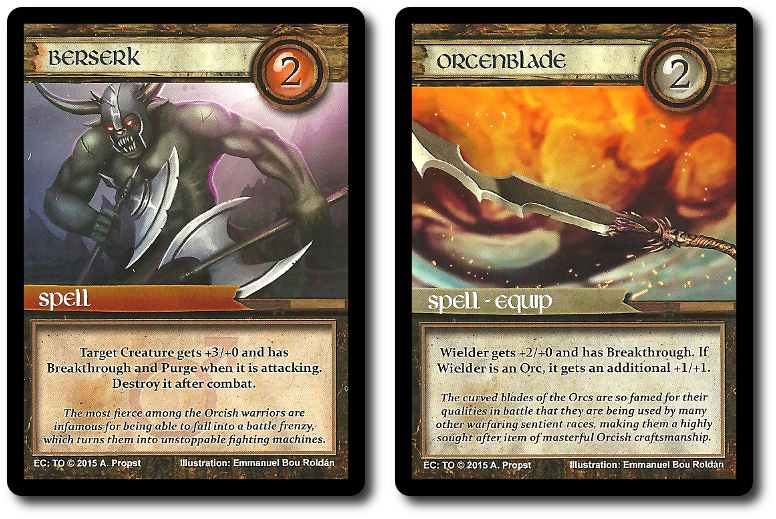 It’s difficult to review expansions, especially when they are so similar to the base game. As such, we went about our review process a bit differently. We divided up the cards found in each expansion and asked the players to make different decks using the same basic core cards. This gave us the ability to see how each expansion fared when being played by different groups of people.

The results were not surprising, if you are already familiar with Elemental Clash. The game is easy to learn and provides a great deal of strategic depth without ever feeling like a heavy game. The new expansion cards did little to improve on what was already provided, but it did give our players new options and paths to take on their way to victory. The most important aspect of the expansions is that their presence in the game didn’t harm the game play. They were easily inserted into existing decks, played with, and enjoyed.

According to one Child Geek, “The new cards give you even more options to build your perfect idea of a magic user. I can’t wait to try them all.” A Parent Geek said, “More options is always good. I feel a bit overwhelmed with everything, and I doubt I’d ever play with all the cards, but I love having the option to do so.” And finally, a Gamer Geek said, “Solid expansions. I don’t think they bring a lot more to the game that is new, but that’s OK. My favorites are the Transformation cards that allow you to really change how the game is going.” Everyone had their favorites and some believed the expansions brought a wealth of new possibilities, while others found the cards to be more of the same. In all cases, Elemental Clash: Tribes & Transformations was approved by all our players.

As for me, I found the expansions to be an interesting challenge to add to my already constructed decks. The cards are very alluring and some of the new cards in the Tribes can get very powerful when combined with similar cards. I had to break down my deck several times until I felt like I had a good mix of old and new cards that could win a game. I personally think the Tribal expansions bring a generous portion of new possibilities to consider, but not nearly as much as the Transformation cards.

The Transformation cards are a lot of fun and I love that they are always at the ready, but can only be used in certain situations. They can be powerful game changers or spend an entire game sitting on the bench. I found myself meaningfully setting myself up to be harmed by my opponent in order to trigger a Transformation card. Highly worth the trouble. New strategies open up and tactics come into play when you know you can turn one of your creatures into a giant lighting spitting dragon.

The value of Elemental Clash: Tribes & Transformations expansions is directly proportional to a player’s desire to add more to the base game. The expansions will certainly bring more goodness and provide players with more to think about and do. Veterans to the game will enjoy the subtle changes and new approaches, but might not jump at the chance to use the cards. New players will be swooning with delight at all the new possibilities. If you played Elemental Clash even just once, I think you owe it to yourself to give these expansions a try.