Please Take Note: This is a review of the final game, but it might change slightly based on the success of the Kickstarter campaign. The game is being reviewed on the components and the rules provided with the understanding that “what you see is not what you might get” when the game is published. If you like what you read and want to learn more, we encourage you to visit the kickstarter campaign. Now that we have all that disclaimer junk out of the way, on with the review. 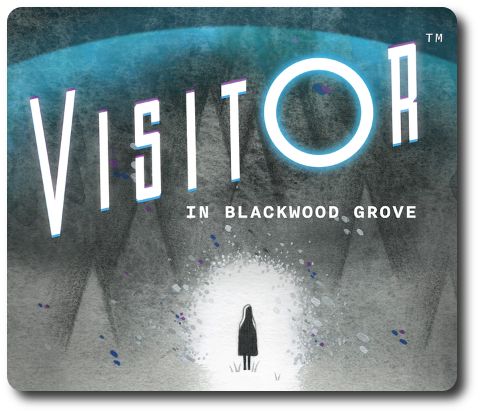 With a flash and a bang, something alien entered our atmosphere and crashed in Blackwood Groove. Only two people saw this event. A young kid who was dreamily looking at stars from their bedroom window and a shadowy government agency who constantly monitors outer space. Now it’s race not only for discovery, but for survival, for an alien has landed and the world will never be the same.

VISITOR in Blackwood Grove, designed by Mary Flanagan and to be published by Tilt-Factor Games, will reportedly be comprised of 100 Object cards, 1 round game board, 1 Visitor shield, 14 card stands, 1 Trust mat, 1 Trust token, 4 Guess tokens, and 4 Reminder cards. As this is a prepublished version of the game, I cannot comment on the game component quality. Nor can I comment on the game’s illustrations, as we were not provided a preview copy with final artwork.

On a Dark Night…

To set up the game, first place the round game board in the middle of the playing area. The game board is also referred to as the “barrier board”. 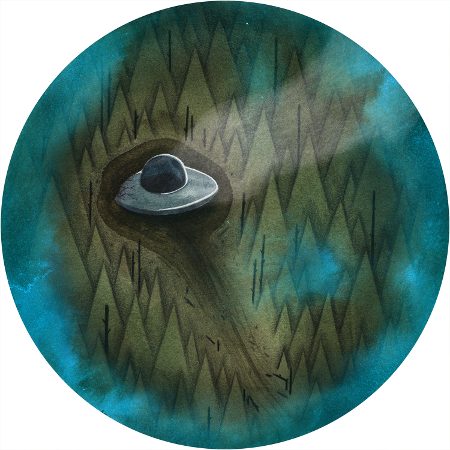 Sixth, deal 6 Object cards to each player. This it the player’s starting hand. Players should keep their cards hidden from opponents.

That’s it for game set up. Let’s see who gets to the alien first…

In a Deep Wood…

VISITOR in Blackwood Grove is played in rounds and turns. A round always starts with the Agents, followed by the Kid, and finally the Visitor. Each role and the actions they can take on their turn are summarized here.

The goal of an Agent player is to break through the barrier and find the alien that crash landed on Earth. To do this, they must determine what the Visitor player’s Pass Rule is. This is done by testing ideas and then proving hunches. Each Agent player can take one action each. They work as a team, but can win the game independently. The actions are as follows:

The Agent player selects one card from their hand and passes it to the Visitor player without showing the card to any other player. The Visitor player looks at the card and announces it’s either “in” or “out” without revealing the card to any other player. The Object card is then placed on a card stand and either placed within the barrier or on the barrier’s border. The Agent then draws a new card, bringing their hand size back to 7 cards.

Since the Visitor is an alien, they do not understand how to speak the Earthlings’ language. This means that proving to the alien that you know the Pass Rule is done without using words. Instead, the player demonstrates to the Visitor player that they know the Pass Rule by first asking the Visitor to draw the first four Object cards and placing them in a row, face-up. The Visitor then classifies each card using their Guess tokens behind their Visitor shield as “in” or “out”. The player then guesses if each card is either “in” or “out”. Then the Visitor reveals their Guess tokens.

Example of four possible objects the Agent must consider

If the Agent was correct, the game comes to an end. If the Agent guessed wrong, the Object cards used to attempt to prove the Pass Rule are discarded and the Trust token is moved to the next position on the Trust mat.

The goal of the Kid is to get to the alien first and save it. Think E.T. the Extra-Terrestrial and you’ve got the player’s motivation. The Kid player’s turn is similar to the Agents, with two possible actions available to them, but only one action can be taken per turn.

If the Kid player guessed wrong, the Object card is placed, but the Trust token is not moved. The Kid player’s turn immediately ends and they do not draw a new Object card.

This is done exactly the same way as the Agents, but the Kid player cannot attempt to prove the Pass Rule until the Trust marker is high enough on the Trust mat!

The Visitor player has only one action on their turn. They must select one Object card from their hand and classify it as either being “in” or “out” in accordance to their Pass Rule. All the players see this and get some much-needed insight. The Visitor player, therefore, needs to be careful. Too much information will allow the Agents to get them, but too little will keep the Kid guessing. As the game progresses, the Kid may earn enough Trust to allow the Visitor to only reveal the Object card to the Kid player, keeping the Agent players in the dark. After revealing a card, the Visitor player does not draw a new one.

To learn more about VISITOR in Blackwood Grove, visit the kickstarter campaign.

The Child Geeks had a lot of fun playing this game, regardless of what role they played. According to one Child Geek, “I really like this game! I feel like it is an adventure and I can feel the pressure of saving the alien before the bad guys get him!” This particular Child Geek was playing as the “Kid”. An “Agent” Child Geek said, “I really like that I have help from my Agent friends, but I can still win the game all by myself.” And an “Alien” Child Geek said, “Holy crud, why is everyone out to get me! I had a hard time trying to tell the Kid how to find me without tipping off the Agents.” All the Child Geeks agreed that VISITOR in Blackwood Grove was a lot of fun, full of moments of intensity, laughs, and cheers. They universally agreed to approve the game.

The Parent Geeks were also big fans. According to one Parent Geek, “This is a very creative and surprisingly simple to learn but really difficult to win game. I like that because it allows me to easily teach it to others, but the game is always different and always presents a new challenge for me to enjoy.” Another Parent Geek said, “I’m surprised that a game that has so little can be so much fun to play. I felt like I was part of a 80’s alien buddy movie. Great stuff.” The Parent Geeks found VISITOR in Blackwood Grove to be a lot of fun with their family and with their friends, with the different victory conditions and always different Pass Rules to keep the game fresh and fun.

The Gamer Geeks were very pleased with the game. According to one Gamer Geek, “What I love most about this game is the asymmetric game play. Everyone has the same goal, but goes about it in very different ways. This allowed me to determine my best path to victory without ever feeling that the racetrack we were all on was occupied. Super good stuff.” Another Gamer Geek said, “A fun and entertaining game. Really fast, too. I think our longest game was only about 15 minutes long and it was crazy intense. I’d play this again and again because the game is always changing.” The Gamer Geeks weren’t gushing over VISITOR in Blackwood Grove, but they sure were singing its praise. That’s about as good as it gets from the gaming elitists.

This is a terribly fast game, which just further enhances the player’s growing need and urgency to determine the Pass Rule before the others. Or in the case of the Visitor player, keeping knowledge at a minimum while maximizing subtle hints. Not at all easy. In fact, I’d argue that the Visitor player has the toughest job, but it’s also the most rewarding. And it’s here that I must shout a word of caution…

DO NOT LET NEW OR INEXPERIENCED PLAYERS ROLE AS THE VISITOR!

The asymmetric game play mentioned by the Gamer Geek deserves a quick word. “Asymmetric” means not identical. Each player is engaged in the same game but goes about playing it slightly differently based on their role. This means players will be butting up against an opponent, but never to a point where their previous actions dictate the player’s results or next possible actions to take. Players learn as they go, adjust as they need, and swim in the same waters as their opponents with lots of room to maneuver. Think of it like playing a sandbox video game. Everyone is playing the same game, but everyone is having a slightly different experience making each player’s interaction with the game uniquely their own.

I very much enjoyed the game and found just as much joy simply watching the game as I did playing it. This is because as an observer, you have a chance to figure out the puzzle, too. The only difference is that you don’t have an opportunity to win (or lose) the game. Super good stuff and I very much recommend you give this game a try.