The Whatnot Cabinet Game Review 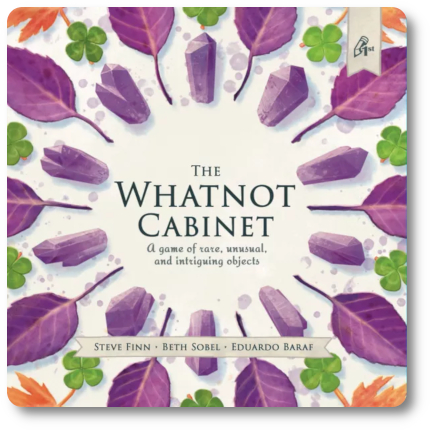 A curio cabinet is a display case or shelf that can hold just about anything. At a glance, it appears to be nothing more than a collection of random bits and pieces. A small drawing of a girl by a pond, an old brass key with no lock to work, a bit of sand in a glass jar from a distant shore, and an old watch that has long since stopped telling the hour correctly except for two times a day. Some might see this as junk, but take a closer look, and you’ll see treasures. In this game, players will take their own journey and collect items of personal value. Placing them on their shelves is only the beginning, as collecting and organizing intelligently is how you win the game.

Preparing for Your Journey

To set up the game, first give each player a Cabinet board and a Player pawn of the same color. Then, place any not used back in the game box. 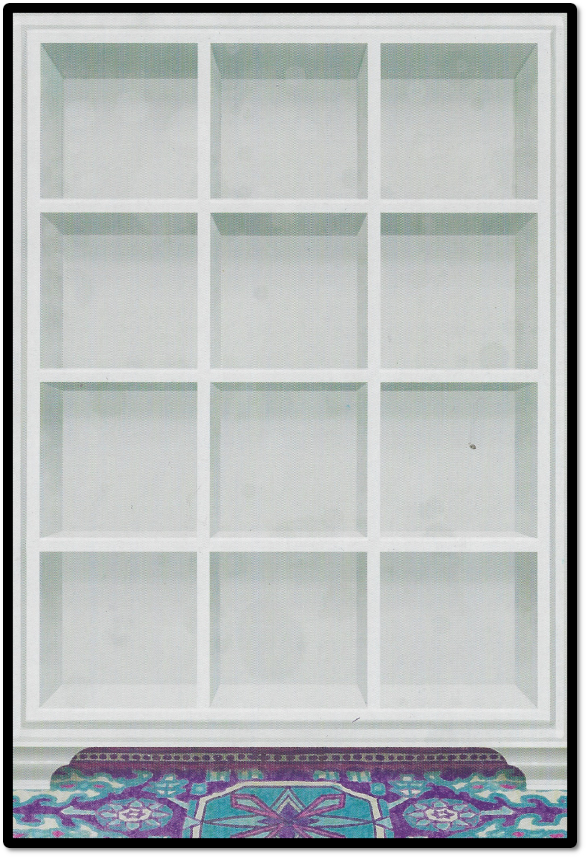 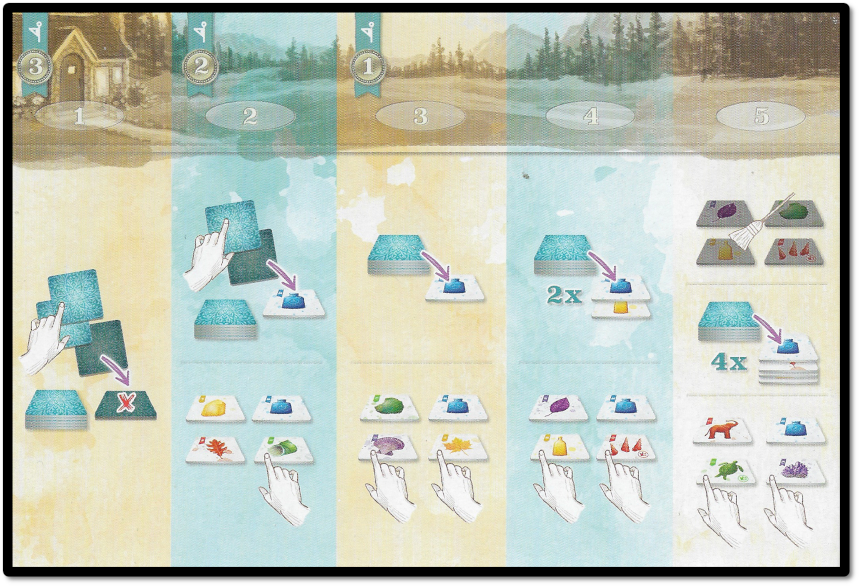 Third, place all the Curio tiles in the cloth bag and give it a good mix. 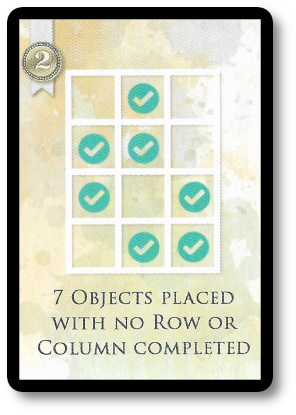 Fifth, shuffle the Wonder cards. Deal one face-up next to the row of Curiosity cards. Return the remaining Wonder cards to the game box. Wonder cards tell the players how they can earn extra points at the end of the game. 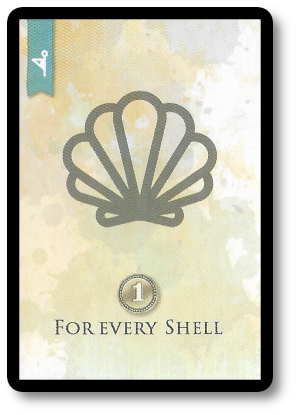 Sixth, place all the Point tokens off to one side to create the “Point supply.”

That’s it for game set up. Determine who will go first and become the “active player.” Have the active player place their Player pawn to the Journey board’s “1” space on the Landscape section. In turn order sequence, each player now places their Player pawn in the next space to the player’s right who placed a Pawn before them.

The Whatnot Cabinet is played in rounds and turns with a total of six rounds per game. A game round is summarized here.

The active player blindly draws four Curio tiles from the bag and places them face-up next to the Journey board in the area designated as the Outdoors section. If the cloth bag is empty, fill it with all the discarded Curio tiles. If a “Special” Curio tile is drawn during the first round, it’s returned to the cloth bag, and a new one is drawn in its place.

In turn order sequence based on their Player pawn location on the Journey board Landscape row, starting with Landscape row space noted as “1”, each player now takes their turn. A player’s turn is summarized here and is taken in the sequence noted:

The player takes their Pawn from the Landscape row and places it in any Action column that currently does not contain an opponent’s pawn.

The action noted must now be taken. Actions per column are summarized here:

Two types of “Special” Curio tiles can be found during the game. If the player elects to collect these tiles, they must immediately resolve them before continuing. 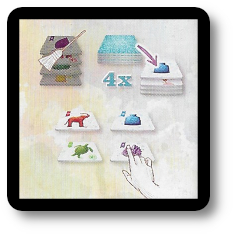 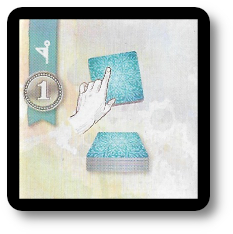 Collected Curio tiles must now be placed on the player’s Cabinet board. The Cabinet board has 12 shelves creating a 3×4 grid. Each shelf can only contain one Curio tile and, once placed, cannot be removed. The one exception is the “Special” Curio tiles, which are resolved when collected.

Curio tiles have a color (red, yellow, green, blue, or purple) and a type icon (leaf, crystal, bottle, shell, or animal). Players should pay close attention to these colors and icons when placing them on their Cabinet board as their location to other tiles will determine the number of points the player earns. 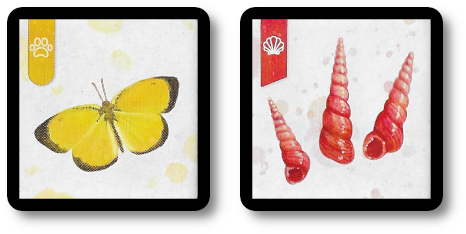 A player’s turn will always allow them to place two Curio tiles.

A player can be awarded Point tokens and Curiosity cards after placing their Curio tiles.

Players earn Point tokens when completing a row or a column, filling it with Curio tiles.

If the player finishes a row or column and does not meet the requirements to score a Point token, they collect a “Blank” token. These are, essentially, a reward for working on your Cabinet but do not count as points at the end of the game. Instead, they are used to determine the winner of a game if there is a tie.

After all the players have completed their turn, it’s time to reset the board.

The game now continues, as noted above, unless it’s the end of the sixth round. If such is the case, the game comes to an end, and the final score is determined.

At the end of the sixth and final round, the game comes to an end. All players should have their Cabinet now full of interesting and unique things. Final scoring is now calculated and completed.

Players then evaluate the number of points earned based on the Wonder card in play. For each Curio tile of the specified type in the player’s Cabinet, they earn one Point token.

Lastly, a player can earn additional points based on the final location of their Pawn on the Journey board.

The Whatnot Cabinet comes with a mini-expansion titled “Fascination Pack”. This mini-expansion introduces secret goals for each player to attempt to complete. Doing so will reward the player extra points at the end of the game. None of the players know what the goals are for their opponent’s initially. As the game progresses, each player’s secret goal is revealed slowly giving everyone a glimpse of what their opponents are attempting to collect. This introduces a new level of competition for Curio tiles and a need to possibly block opponents from collecting specific colors or types.

The Whatnot Cabinet can be played solo. However, the game setup is different and includes a “Rival” card deck. When playing the game, the player totals their points and compares the final value to a table provided in the game rulebook. The resulting value determines how well the player did.

The Whatnot Cabinet also comes with a slight rule change if playing the game with only two players.

To learn more about The Whatnot Cabinet, visit the game’s webpage.

The Child Geeks enjoyed the game a great deal, finding it to be a game full of exploration and puzzle-solving. According to one Child Geek, “The things you find in the game really are interesting and are things I would collect myself if I had a cabinet. I liked that each tile brought something new and how you had to place them in your cabinet was like trying to solve a puzzle.” Another Child Geek said, “The game was easy to learn, and I had fun playing it. The best part is placing your tiles to your Cabinet to make colorful designs.” When all the Child Geeks came in from their journey and placed their treasures on their shelves, they stood back, and all agreed that The Whatnot Cabinet was well worth their time.

The Parent Geeks found the game to be just as enjoyable and remarked how calm it made them feel. According to one Parent Geek, “This game reminded me of when I was a kid and would place rocks and other things in my pockets when I went on family walks. The game made me calm and remembered fond memories of the many treasures I found.” Another Parent Geek said, “An excellent casual game of set collecting and puzzle-solving. I really enjoyed it. The game’s pace is easy going and relaxing, while still challenging players to think ahead and make important choices.” The Parent Geeks voted to approve the game with all the cabinets full, finding it an experience that filled them with joy.

The Gamer Geeks found The Whatnot Cabinet to be exceptionally light, casual, and engaging with just enough depth to keep them interested. According to one Gamer Geek, “A good game. It reminds me of several other games in this line where players collect components and build patterns and designs. It is very similar to Sagrada, to be honest, but different enough, too, to be its own thing. I enjoyed it and think it works great as a game night opener or as a filler between larger games.” Another Gamer Geek said, “Light and colorful, explorative and creative. It was fun but not deep enough to be the game for the evening. Still, I would play it again with both my peers and family members. There’s a real game here to explore and be challenged by.” When the game was put away, the Gamer Geeks decided the treasures it contained were worth their appreciation, voting to approve the game fully.

The Whatnot Cabinet is meant to thematically represent a walk the player takes around the neighborhood or park. It intentionally wants to be calming and casual while at the same time engaging and challenging. Which this game does and does it beautifully. Game rounds are swift, and player’s actions are meaningful. As the game progresses, decisions become more difficult but faster due to the lack of options for tile placement. It’s an interesting mix of growing tension and relaxed decision-making.

I enjoyed the game, finding it easy to teach and a real joy to play. Players both young and old found it to be so, too, and regardless of skill or experience, each player could find their place in their personal journey in the game. You do compete with others in the game, but really only at the end. I found more enjoyment in the placement of the tiles I collected than in winning the game itself. Very satisfying in a personal way, while at the same time still providing those who want the excitement of competition to be just as happy.

Do play The Whatnot Cabinet when the opportunity presents itself. I believe you will find its journey rewarding, filling you with wonder and curiosity.