Please Take Note: This is a review of the game’s final prototype. The art, game bits, and the rules discussed are all subject to change. The game is being reviewed on the components and the rules provided with the understanding that “what you see is not what you might get” when the game is published. If you like what you read and want to learn more, we encourage you to visit the Kickstarter project page. Now that we have all that disclaimer junk out of the way, on with the review! 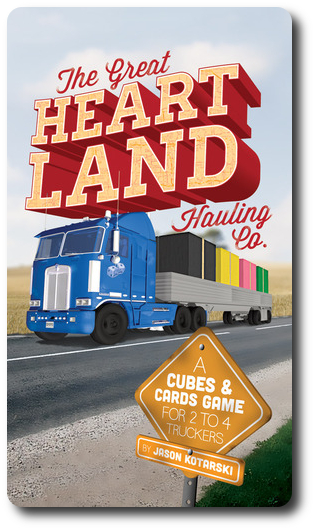 The nation might stretch from sea to shining sea, but it’s the black ribbon of asphalt that keeps it tied together. On these roads travel the men and women who keep commerce and goods flowing. There is always a demand to be met and the only way to do so is to get it there as efficiently as possible. Every trucker is attempting to do just that, but there are only so many goods to go around. Keep your eyes on the road and the prize, as you attempt to be smarter and faster than your competition.

The Great Heartland Hauling Co., by Dice Hate Me Games, is comprised of 46 Freight  Bill cards (15 soy beans, 15 corn, 8 cattle, and 8 pigs), 19 Fuel cards (in values of Move 1, Move 2, and Move 3), 12 Location cards (double-sided), 1 Distribution Center card, 8 Score/Cargo cards (2 for each player, in 4 different colors), 4 Semi Truck playing pieces (in 4 different colors, 1 per player), 4 Scoring pawns, 60 wooden Cargo cubes (representing green soy beans, yellow corn, black cattle, and pink pigs, 15 of each color), and 4 Player Reference cards. As this is a review on the final prototype, I will not comment on the component quality. I will state, however, that the team at Dice Hate Me Games have put a great deal of thought into the components and game design, with a reported final game offering looking very professional. 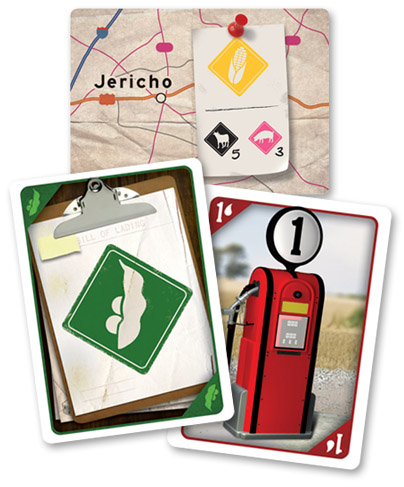 To set up the game, first count the number of truckers. Depending on how many will be playing, the game set up is different. 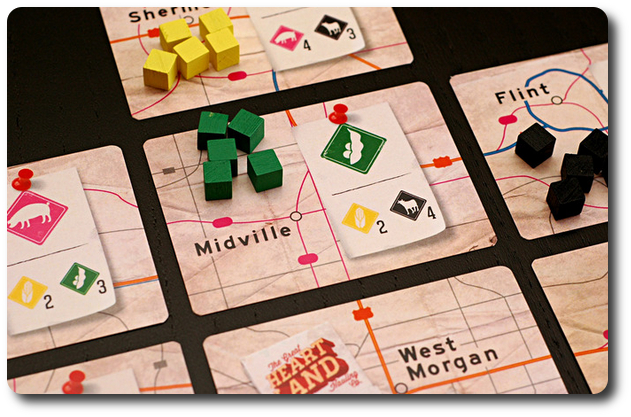 Example of cubes being distributed on the Location cards

Shuffle the Freight Bill cards and Fuel cards together and deal each player 5 cards, face-down. Place the deck of cards off to the side of the playing area (this is now the draw deck) and draw 3 cards from the top. Place these three cards next to the deck, one after another, in line and face-up.

That’s it! Pick the first player and get behind the wheel!

Hammering Down the Big Slab

Each trucker will take a turn which is made up of 3 phrases. Once they have completed their turn, the next trucker going clockwise has a chance behind the wheel.

In this phase, the trucker must choose to complete one of the 3 following actions:

In this phase, the trucker must choose to complete one of the 3 following actions:

The trucker now draws cards from the face-down deck or takes any of the face-up cards next to it, filling their hand back up to 5 cards.

End of the Road

There are a number of game variants that can be applied to adjust the game’s length and difficulty. They are as follows:

To learn more about The Great Heartland Hauling Co. and download the rule book for more game details, see the Kickstarter project page.

Games where you need to pick-up and deliver are excellent training for a little geek’s mind. They need to be able to think several moves ahead, determine the optimum route to achieve their mission, and then think about what they are going to do next before they even get there. Most of the time, I’d suggest that such games would be too much for little geeks to play and enjoy. There’s a lot to think about and that can often lead to vapor lock and possible nose bleeds. The Great Heartland Hauling Co., however, has streamlined their rules to make game play very straight forward. The number of actions available to a player are broken down into simple steps where you move and then pick up or unload. From a little geek’s perspective, this easy to grasp.

And if the little geeks can understand the game, I have no doubt the Parent and Gamer Geeks will have an easy time learning how to play. In fact, there is nothing about this game that jumps out at me to suggest that any of the three test groups are going to have a problem with the game play. At the most, I think we’ll see the non-gamers dislike it and not appreciate the finer points of hauling little pink pig cubes.

And so, after explaining the rules of the game to my little geeks, demonstrating the pick up and drop off process, as well as means of travel and fuel management, we were ready to play. My 5-year-old won’t have a problem playing this game solo as reading is not a needed geek skill to participate. As I set up the game for our first play, I asked them their thoughts before we jumped into our cabs and started hauling.

I’m not getting a strong vibe from my 5-year-old, but he can be hard to read sometimes. Let’s play the game and see if this is going to be a great trip or an agonizing journey.

The Child Geeks had mixed feelings about the game. My 5-year-old was never able to get a solid grasp of the phases or hand management and eventually decides to excuse himself to play with some action figures. My 8-year-old kept on trucking and did very well. He was caught with Cargo cubes during the end of the first game and played it a bit too safe after that, resulting in no victories, but he demonstrated excellent and thoughtful game play throughout. On a relevant side note, my 8-year-old kept calling the little pink Cargo cubes “ham bits”. I found this strangely disturbing.

Parent Geeks also enjoyed the game and found it to be light and casual. They especially liked the level of logistics that were needed to play the game, but done in a way that was easy to grasp and manage. In other words, a player could just bounce from one location to another, collecting a small number of points, and still have a good time. The non-gamers didn’t care for the game and found it to be a bit too much of a thinker for them.

Gamer Geeks really enjoyed the game and had a wonderful time snapping goods up before their opponents could. They all agreed this was an excellent game and worth playing. 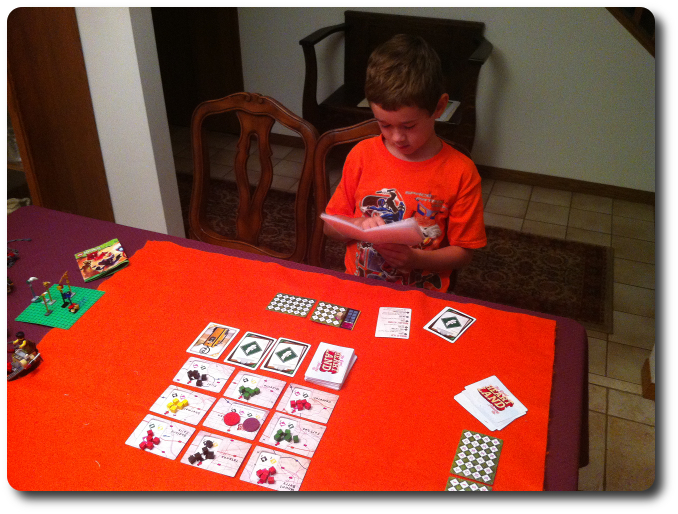 The game is easy to learn, play, and set up, as my little geek is clearly demonstrating with his awesomeness

Gamer Geeks, this is a game about resource management on the open road. You’ll be doing a lot of trading in hopes of making points as quickly as possible. The real joy of this game will come from the surprising amount of energy you must put into your thought processes when you attempt to logistically determine the best path to take. The game is made even more challenging with other players picking up goods and moving them around. In the end, the game will be won by creating a “master plan” that is achieved one small trip at a time by the player who has the strongest hand/resource management skills.

Parent Geeks, this is a fun and light game about resource management and logical thinking. Players will need to think through their turns and consider their objectives carefully. A player must watch their fuel, their cargo space, and the other players. The worst thing to happen to a player in this game is running out of gas or being stuck with a trailer full of undelivered goods. But all the players will see these conditions coming and will have enough time to adjust their strategy accordingly. The end result is a game that will require thinking, but plays fast enough to never make anyone feel bogged down.

Child Geeks, this game is going to push you to look out and beyond the horizon. You’ll need to focus on the here-and-now as much as you will need to be thinking of what you will be doing next. Resource management is a must. Everything you do has potential to create points, but the trick is finding a way to make those points as quickly as possible. Don’t be afraid to travel around, but never be caught in a location with nothing in your trailer. You won’t make any points if you don’t deliver the cubes!

The Great Heartland Hauling Co. can be a fun and light game or a very serious and competitive one, depending on who you are playing with. When I played with the Parent and Child geeks, the game was about moving as fast as you could, and the players more or less stayed out of each others way. When I played with the Gamer Geeks, players were stealing goods out from under other players and hording them to ensure other players couldn’t score points. In both cases, the game was well received and highly enjoyed. Although, I’ll never be able to look at ham cubes on a salad again and not think “pink pig chunks”.

If you are looking for a light pick-up and deliver game with focus on resource management that can offer a wide variety of different playing experiences that includes randomized set up, look no further than The Great Heartland Hauling Co. It is sure to take you and your friends on a wonderful gaming journey.