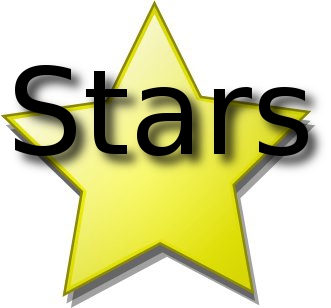 The peaceful night sky that twinkle above us at night is hardly the tranquil starscape we imagine it to be. The stars have grown jealous and petty. Instead of being content with their lot in interstellar life, they now push and shove each other in an attempt to be the brightest star in the sky.

Stars is comprised of one 1 game board, 1 Black Hole cube, 1 White Nova cube, 5 White Star cubes, and 5 Orange Star cubes. If you buy the game, you will need to put stickers on the cubes, but don’t let this scare you off. The instructions are easy to follow and very clear. The stickers are easy to apply and will not take you anymore than about 1o-minutes to complete. The game also comes with a number of additional stickers allowing you wiggle room if you should make a mistake.

Painting the Sky with Stars

Each player will be given a set of 5 cubes, all of the same color. These represent the stars the player will be using during the game. On one side of the cube is a “Bright Star” and on the other side is a “Dim Star”. To continue setting up the board, each player places their five cubes so their Bright Star is facing upward and all the red sides are facing the Black Hole cube. Once completed, you are ready to play!

Example of Dim and Bright stars, as well as initial game set up

The actions a player can perform on their turn are as follows and each action needs a specific amount of action points to complete. The rules do not state if the player is required to use all their action points. We played the game where taking actions was optional.

It is then the next player’s turn and the White Nova cube is advanced 1 space forward.

The game continues until one of two conditions are met:

To learn more about Stars and read the complete rules, see the game’s official web site.

Abstract games are a big hit with my little geeks and I don’t think Stars will be any different. In fact, the longer I keep playing games with them, the Prediction part of the review becomes less and less critical because of the experience my little geeks already have. Regardless, I like to play the pros and cons of a game before turning it over to my little geeks, family, and friends to try. Part of it is a game to me where I attempt to predict how well a game will be received based on what I know of the game and the players.

Stars is more complicated than my 4-year-old can muster at the moment and I am not all together sure if my 7-year-old can keep up, either. While the rules of Stars is very straight forward and not at all lengthy, the game difficulty increases on every turn. The players are given more and more action points, meaning they will need to make more and more choices. This is unlike any other game my little geeks have ever played, which by default, makes it a tough one to call.

When I showed it to my 7-year-old and explained the rules, he immediately grasped the challenge and the game’s intent. He had no questions other than if a pulse would continue once it struck another star. Since we were just playing the normal rules without the game variants, the answer was no. This seemed to put him at ease as I demoed each action and how the pulses of the stars worked. In very little time, he told me he was ready to go and we should play the game. As I set up the game, he told me the following:

I like the sound of confidence, but I’m not altogether sure he fully appreciates the game yet. Let’s give it a try and find out.

Stars is a challenging game and slowly starts to put its weight on you. This was an odd experience for both my little geek and me. At first, the game moves exceedingly fast as the number of action points are few. As the game progresses, the player is left with more and more choices. The game board suddenly becomes much more dangerous as it begins to open up. For me, this was brilliant and I was loving every second of it. For my little geek, it began to beat him up. The level of stress and importance of each move became more and more apparent. Eventually, he cracked under the pressure and started making mistakes. In the end, he was left feeling run over rather than entertained.

The same could be said with the adults and more elite gamers I played with. At first, the game starts out as kind of a joke. Move one cube, shift another, slowly advance, and not much more. Around the 25 action point mark, however, your attitudes shifts. The mounting difficulty sneaks up on you, which was always commented on. A game that played very simply changes into a mighty exercise of math as players attempt to think through their moves before they move their cubes. Several times, I caught players simply moving cubes because they didn’t know what else to do. Rather than vapor lock, they put themselves on autopilot and just went through the motions. Around the 50 action point mark, the casual gamer is quickly separated from the elitist gamer. Victory almost always went to the player with the higher mental and emotional stamina. 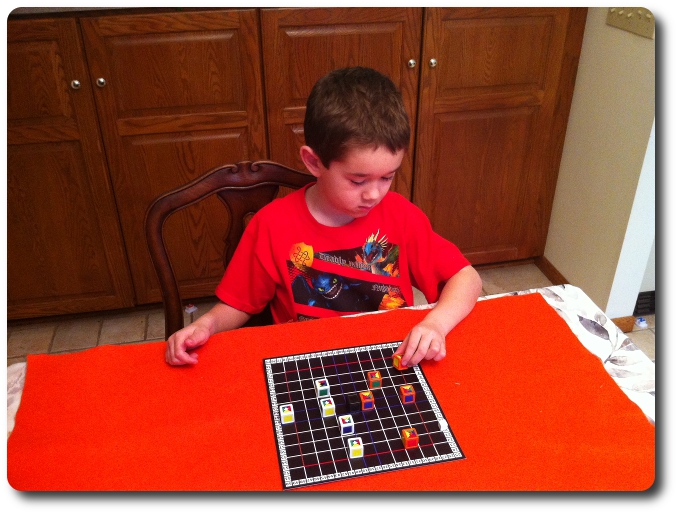 My little geeks makes his move - also, there's a lot of orange in this image...

Gamer Geeks, Stars is a very interesting abstract game that gives the player more and more options on their turn, making it more of a strategic race than an area control experience. Although area control is very much needed, the area in which you are attempting to control is always shifting. Your opponent will always have one more action point than you which could give them just enough of an edge to slightly move out of your reach. While this might seem exasperating at first, it makes you really focus in on moving multiple cubes at a time, essentially setting up traps. You’ll spend energy attempting to bait your opponent while you create combos and move your cubes in for perfect positioning. Of course, your opponent is doing the same thing which will keep you second guessing, suffering from the bitter shocks of hindsight, and scratching your head about what to do next. Very challenging, very rewarding, and mentally exhausting.

Parent Geeks, this is a wonderful abstract game that is sure to make even the smartest of family members and friends sit up straight and take notice. The game is nothing special to look at, but what it lacks in glam it makes up for in-depth. The rules are very straight forward but the game becomes more and more difficult as the player is given more and more choices. This end result might lead to many players suffering from vapor lock or blindly moving cubes around until their next move is more clear. Do expect a challenge and a very rewarding game.

Child Geeks, this is a tough call. My little geek enjoyed the game but found it became more and more frustrating. The added action points caused more confusion than anything else and he became overwhelmed. While he admits he likes it, it is not a game he would like to play again for a bit. For that reason, I’m going to agree with the game designer’s recommended age and suggest that this is a game for the older little geeks. Do give it a try, though, and find out for yourselves! For now, it is rejected but will most certainly be revisited.

Stars was a real surprise to me. I wasn’t expecting much by reading the rules and the game components do not make the game pop or get me excited. The cubes are exceedingly functional as is the game board. Once I played the game, however, I was hooked. I became completely engrossed in the game play and the level of thought I had to put in my moves. Several times I thought I had my opponent on the ropes, only to find that I was just short an action point or just out of range. The ever-increasing number of action points make it necessary to continue to adjust your tactics as you attempt to position and control the game board. Simply outstanding and highly recommended, Stars is one game that’ll keep you thinking well after it has been put away.