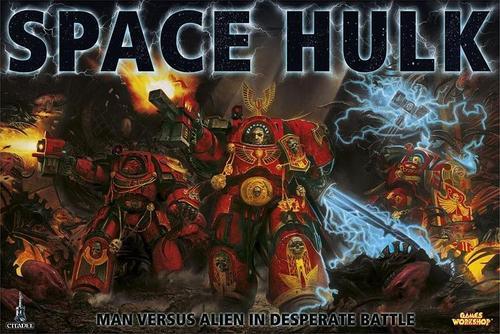 Space Hulk was originally published back in 1989; it has recently undergone a limited third print run in late 2009. The components, from the chunky corridor and room tiles to the incredibly detailed Space Marine and Genestealer models, are extremely pleasing to the eye, and begging to be painted. Space Hulk is a game that my son, Kyan, asks to play ever since it arrived on our doorstep. Provided a simple scenario is selected or devised, the rules in this game are simple enough to the point that my six-year old son can enjoy playing along with me.

Setup can take 8 minutes or longer depending on the scenario. Once the map is set up and the Space Marines are in place, the game can begin. Since getting the game, my son and I have regularly played the first scenario entitled, “Suicide Mission”. In this specific scenario a squad of five Space Marines is tasked to enter the space hulk, get to the control room, and destroy it with a heavy flamer. Sounds easy enough, right? Wrong. While the five Space Marines have some powerful weapons, their bulky armor slows their movement. Meanwhile, the Genestealer-controlling opponent can have as many as 22 fast-moving Genestealers that are quite a threat at close range.

Combat is simple. Space Marine weapons get a set number of 6-sided dice associated with them as do Genestealer attacks. The number rolled and mechanics used to hit vary, but are simple enough in the first scenario. More advanced scenarios in the game make use of more advanced weapons and attacks.

The game ends when the victory conditions are met as described in the scenario book. For example, in the game we played, if the Space Marine with the heavy flamer is killed, the Genestealers win. 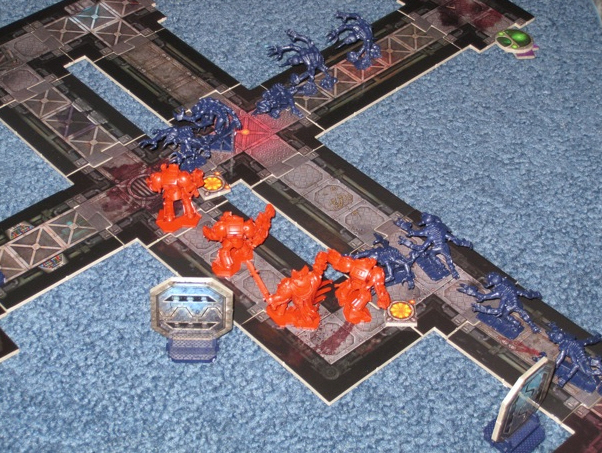 The Space Marines are in trouble, weapons are jammed and the Genestealers are at close range, ready to attack!

Some of you are probably thinking that I am stretching or overstating the educational skills afforded by Space Hulk. Other than the rules, this game requires no reading by the players, and so it is perfect to play with kids around the age of five. The first scenario is very straightforward and is one that we have played every time I brought the game out to play with my son. Kyan loves to play the Genestealers simply because when one dies, he can always get more the next turn. He gets very giddy when the two blips he has reveals three Genestealers each. Like a kid at Christmas time, he joyfully placed his additional six Genestealers to the others he already has on the board. Times like that make it difficult for the Space Marine player, especially if the Genestealers are close by and a Space Marine’s weapon jams!

I recommend that when playing against children, the child takes the role of the Genestealers. Because there are 22 models, it affords the child almost an unlimited number of lives. This lowers the amount of emotional stress placed on the child as long as you make it clear to them that losing a Genestealer simply means the model needs to “sit out” for a little while until they are brought back into the game via a revealed blip. On the flip side, when a Space Marine dies, it’s not coming back.

Logic also comes into play when placing Genestealers and revealing blips. My son had to recognize the optimal position of his reinforcements relative to where my Space Marines were. In addition, he had to decide when the best time was to reveal his blips. Due to the tight quarters of Space Hulk, if he reveals a blip with three models, yet there is only room to place two, he automatically loses one Genestealer model. In this event, he would have to decide if taking a possible loss at that time was worth the reveal.

I enjoy Space Hulk as does my son. The only gripe we have with the game is the time it takes to assemble the map and sort out the cardboard chits. Putting the game away can take some time as well. Other than that, Space Hulk is a game that is both visually pleasing and very accessible to my six-year old son. If you enjoy miniatures-based combat as well as a sci-fi theme, Space Hulk is a game to consider purchasing. 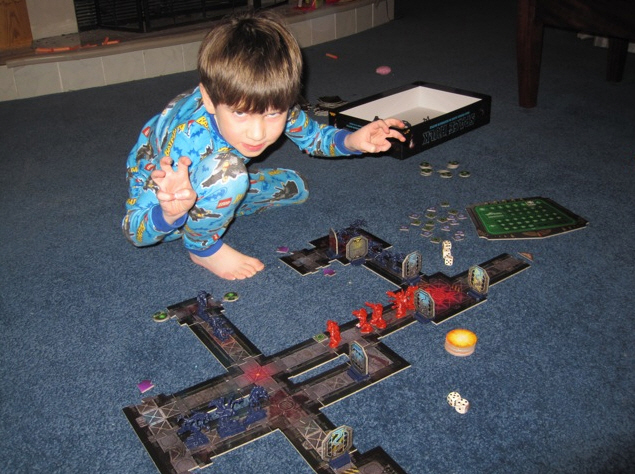 Looks like an extra-large Genestealer came in the box! 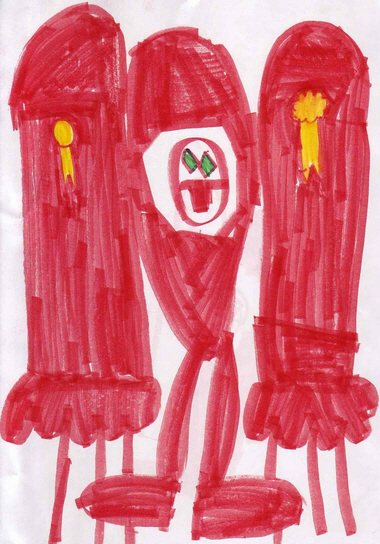 Kyan’s drawing of a Space Marine.