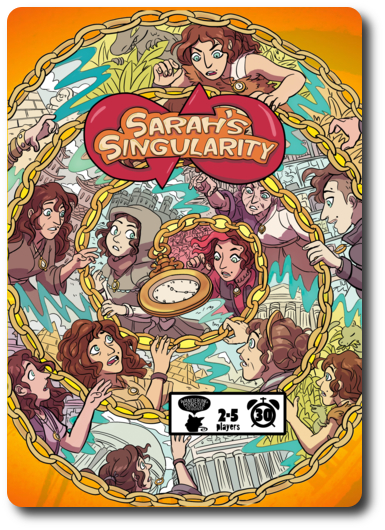 To travel through time is to risk creating countless paradoxes. A few paradoxes here and there isn’t a bad thing. A paradox to the universe is like a painting on a blank wall. It ties everything together. But many paradoxes? That’s where…or better put “when”… time starts to fall apart. Meet Sarah, a time traveler who just created the mother all paradoxes, repeatedly. Good thing there are an infinite number of Sarahs to fix it.

Sarah’s Singularity, designed by Thomas Gutschmidt and to be published by Daily Magic Games, will reportedly be comprised of 48 Companion cards, 42 Mission cards, 42 Zone tokens, 36 Selector cards, 12 Personal Objective cards, 10 Sarah cards, 1 Sarah Prime token, and 1 Chronologist token. As this is a review of a prepublished game, I cannot comment on the game component or artwork.

To set up the game, first separate the Mission cards into different piles using the card’s noted Time Zone symbol on the card’s back. 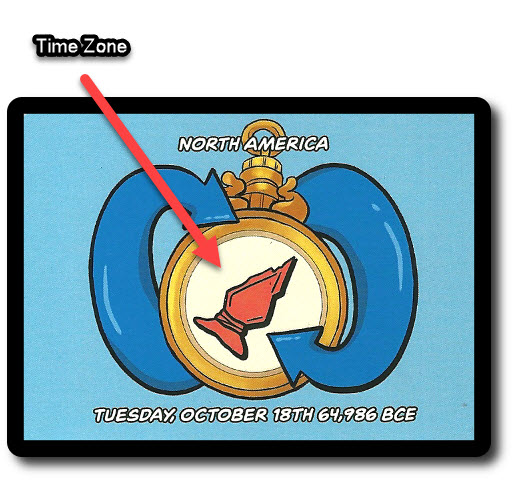 Second, select a number of Time Zones equal to the number of players in the game, plus one more. Return any Mission cards not selected back to the game box.

Third, shuffle the selected Mission card stacks separately and place them face-down in the middle of the playing area in a row, with the earliest Time Zone on the left and most recent on the right. Turn the top card of each stack face-up, placing it below the stack it came from.

Fourth, place the 7 Zone tokens for each of the selected Time Zones above its matching Mission stack. Return any unused Zone tokens back to the game box.

Sixth, deal 7 Companion cards face-up  above the face-down Mission cards. This is referred to as the “Prime Row”. Place the Sarah Prime token on top of the right-most Companion card in the Prime Row.

Seventh, deal one Companion card face-up below each of the revealed Mission cards.

Ninth, give each player 1 random Sarah card and 3 Companion cards, face-down. This is the player’s starting hand. 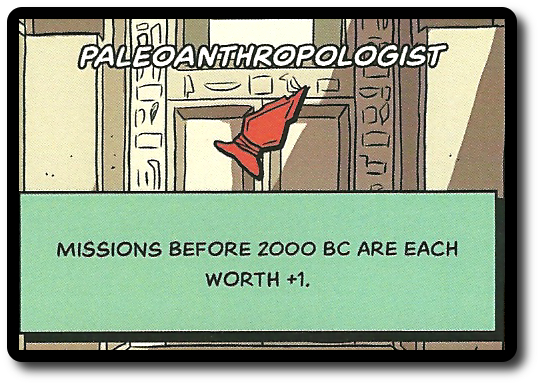 That’s it or game set up. Determine who will go first and give them the Chronologist token. “Time” to play.

Sarah’s Singularity is played in rounds and turns. A game round ends when all the players have taken their turn in turn order sequence. Turn order is determined by what Time Zone the players are currently located on. Earliest Time Zones go before others.

Before players take their turn, they must secretly decide on which Time Zone they will visit this round. This is done by each player placing a Selector card in front of them, face-down. When all the players have played their card, they reveal all the cards simultaneously and place their Sarah in the indicated Time Zone.

On a player’s turn, they can take any of the following actions once and in any order they like.

The player takes the Companion card from their Time Zone and adds it to their hand. A Companion is considered “lost” if the Time Zone it’s currently occupied in does not match its Origin Zone. The player will also receive a Zone token from the current Time Zone if any are still available. 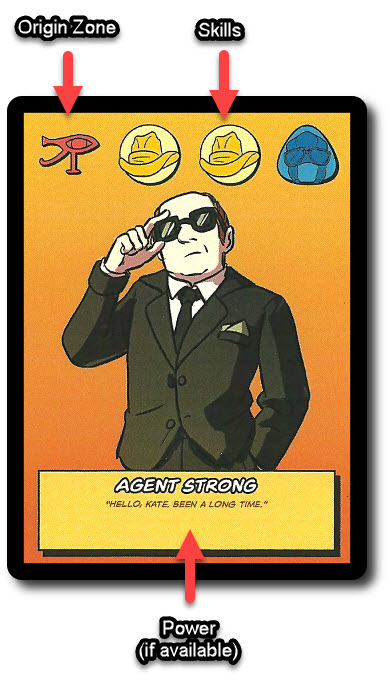 Drop Off a Companion

The player can play one or more Companion cards from their hand to the current Time Zone if the Origin Zones match the currently occupied Time Zone (no fair dropping multiple Companions off in a time and place where they shouldn’t exist). But being fair isn’t what time travel is all about. Indeed, time travel is about bending rules, not following them. A player can play a Companion card to a Time Zone that does not match the Companion’s Origin Zone, but only one. The fabric of time can only be stretched so much.

Use Your Sarah Power

Each Sarah card has a special power. The player can now activate it, resolve the effect. 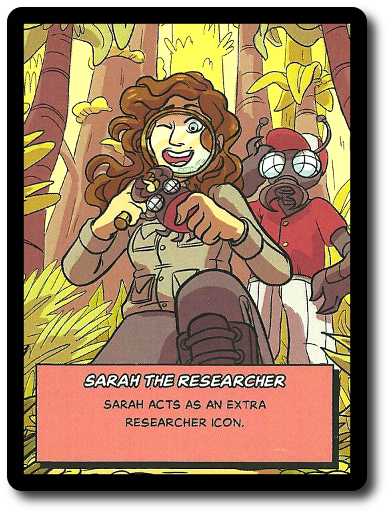 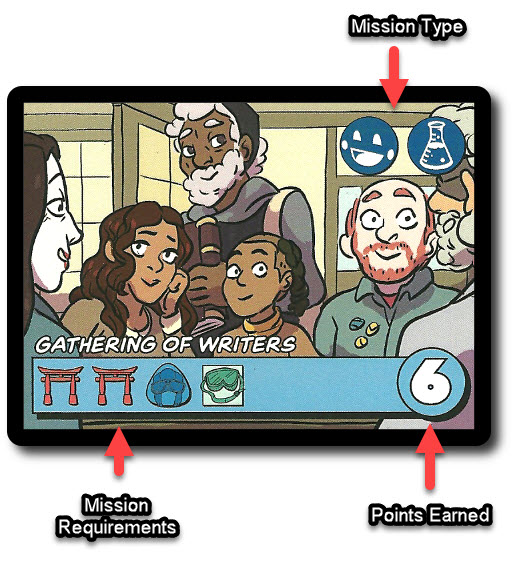 Once the Mission card is solve it’s collected by the player and placed face-up in their playing area. All Companions in that Time Zone are discarded and a new Mission card is revealed, as is a new Companion card.

Where in Time is Sarah Prime?

Sarah Prime, the first Sarah who started all this paradox mess, continues to travel, blissfully ignorant of the trauma she is causing the timeline. At the end of each round, Sarah Prime travels to a new Time Zone. When and where she travels is determined by first taking the right-most Companion in the Prime Row and looking at its Origin Zone. The Companion card is added to the Companions already in play in the matching Time Zone in the Mission Row. The Sarah token is then moved to the top of the Time Zone’s Mission stack. This is Sarah Prime’s new location and where a new Companion was just dropped off.

If two or more players ever visit the same Time Zone in the same round or one or more players visit the same Time Zone where Sarah Prime is currently located, a paradox occurs. This is where things get a little weird when it comes to reality within the game. All the players involved in the paradox turn in their Sarah cards and are dealt a new one. These are new versions of Sarah that just popped into existence, having never been and always were, simultaneously.

The game ends when either the last Mission card from any Time Zone is collected or the seventh round ends after each player has taken a turn. Players now count their points.

In addition, a bonus of 4 points is awarded to the player who collected the most of each individual Mission Bonus icon.

After all the points are determined and added together, the player who has the most points becomes the new Sarah Prime. All other Sarahs (i.e. “players”) snuff out of existence.

To learn more about Sarah’s Singularity, visit the Kickstarter campaign.

The Child Geeks had a wild ride with this game, enjoying the thematic elements of exploring different time zones, picking up the oddball companions, and running into their other selves along the way. Thematically, the game was a hit. The light play style made it an easy game to approach and to learn, giving the Child Geeks warm fuzzies right from the start. According to one Child Geek, “I really liked this game! Felt it was a time travel adventure from the very start.” Another Child Geek said, “I thought the game was easy to learn and hard to win. I like it when a game is like that.” From the very beginning, it was clear that the Child Geeks were enjoying themselves and made it equally clear that they wanted their families to play the game with them. When the it came “time” to vote for the game, the Child Geeks unanimously gave three cheers to Sarah.

The Gamer Geeks are not a forgiving group and they did their best to break the game, as is their modus operandi. In truth, I have found that the gaming elitists play “favorites”, leaning more positively towards certain games rather than others more instinctively. From the very start, the Gamer Geeks were skeptical about the game. The theme was fine, but it was the simplistic (from their point of view) playing style of collecting sets of cards that turned them a bit off. According to one Gamer Geek, “Looks like a good family game. Too bad family games seldom interest a true gamer.” Not sure what a “true gamer” is, but there you go. The elitists, however, warmed up. After playing a few games, they found that Sarah’s Singularity was more than just set collecting. It actually required strategy to win and there were plenty of opportunities to make use of tactical advantages. Slowly, but measurably, the Gamer Geeks went from cold to lukewarm, with some even praising the game by the time they were done playing. When all the votes were in, Sarah’s Singularity had an equal share of fans and cynics, resulting in a mixed level of approval.

Sarah’s Singularity is light, but has enough strategy and tactics to keep you busy and engaged. This appealed to all our players except the most elitist of Gamer Geeks who not only want to be challenged, but who also want to feel a bit stressed about their game. Sarah’s Singularity will challenge you, but never to a point where you start perspiring or the room starts to spin. Rather, the game rewards the player for exploration and keeping as fluid as possible. The game wants the players to jump around which greatly improves the odds of creating a paradox. Which is a paradox in and of itself. You wouldn’t think that the Paradox rule in the game would be beneficial, but it does a lot for the game play. It keeps players adjusting, makes time travel somewhat treacherous, and allows players a viable way to change-up their game playing style.

I very much enjoyed the game and had a great time playing it with my family and friends. Great theme, quirky characters, and meaningful game play. Yes, Gamer Geeks can be a bit “jerky” at times when it comes to what games they like, but I never once saw any Gamer Geek frowning while playing the game. They were usually too busy laughing, smiling, or making jokes. In short, having fun.

Do make time to play Sarah’s Singularity. While it might lack the meatier game play Gamer Geeks have come to crave, it will most certainly appeal to inexperienced and casual players.