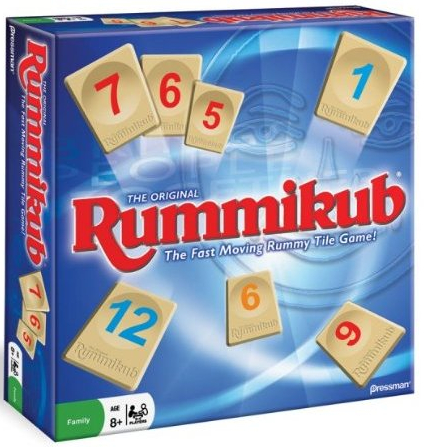 Combining elements from the classic games Rummy, Dominoes, Mahjong, and Chess, Rummikub has been played on gaming tables around the world since the 1930s. Easy to learn and fun to play, Rummikub is accessible to a wide age range and mixed skill groups. It’s a classic game that keeps being made and enjoyed by each gaming generation that has played it. If you haven’t heard of Rummikub, it’s time to consider leaving your cave.

Rummikub (pronounced “cube”, not “cub”) was first released in the United States in 1977 and won the Spiel des Jahres in 1980. As the name suggests, the game is similar to Rummy. The game is comprised of 106 tiles, consisting of two jokers (which act as “wilds”) and 2 sets each of numbers 1 to 13 in 4 different colors. The tiles are rather small, about ¾” by 1″, and are ideal for tiny hands. The game also includes 4 tile racks in which players place their tiles and are very useful for organizing a player’s hands into groups and runs. The whole shebang can be assembled into a compact container for convenient portable gaming. Not included with the game, but necessary to play, is a pen or pencil and something to write on to keep track of the players’ scores.

The tiles are mixed face-down in the center of the table (some versions of the game come with a pouch from which tiles are drawn) and then each player takes 14 tiles to place in their tile rack. The idea is to use these tiles to form sets. Sets must contain at least three tiles and are either groups (same value, different colors) or runs (same color, consecutive values). 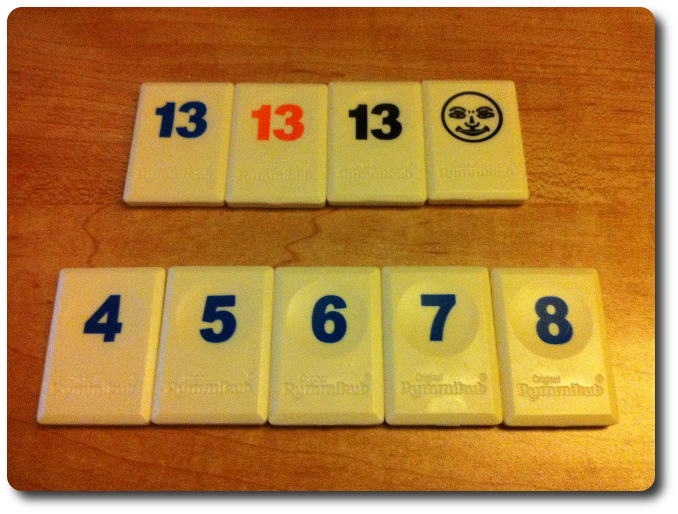 The game is played in rounds. A round consists of all the players taking as many turns as necessary to complete the round. On their turn, a player must either meld tiles from their tile rack to the center of the table or else draw a tile. A player’s initial meld must include tiles with a summed total value of at least 30. Tiles already melded and on the table, including jokers and tiles melded by other players, may be rearranged freely so long as all tiles remain in legal sets. The rules stipulate a time limit for rearranging tiles, but this seems optional unless you have players prone to analysis paralysis.

Once every player has had their turn, the next player going clockwise goes.

Ending the Round and the Game

The round ends when a player has emptied their tile rack or, less commonly, when there are no tiles left to draw. A player who clears their tile  rack gains points equal to the total value of tiles in their opponents’ tile racks (jokers count as 30, all other tiles are worth the value on them). Players lose points equal to the total value of tiles remaining in their tile racks.  The score values are then added or subtracted to the individual player’s total for all the rounds played so far.

The winner of the game is the player who first reaches the pre-agreed target score. There are no set number of rounds to reach this score.

To learn more about Rummikub and play it online for free, visit the game’s official web site.

In most of my reviews, I try to predict whether or not my children will like the game. This is one of the few instances in which my children are more familiar with the game than I am. They had played this game with their nanny several times previously, and subsequently, their nanny purchased it as a Christmas present for them. So the burning question was whether I would find Rummikub to be an engaging experience or not.

Based on my impressions of similar melding games, I was not optimistic! For instance, I consider standard Rummy and Canasta quite dull affairs, although my experience is limited and I have not played these against serious opponents. Gin Rummy, on the other hand, requires a fair degree of skill, as does Mahjong. Both games are very repetitive, but I quite enjoy playing these once or twice a year, especially if cash stakes are involved!

(Note that Father Geek does not endorse gambling.)

I was surprised that Rummikub is slightly more challenging than I expected. As more and more tiles are melded, the universe of possible rearrangements expands accordingly. I would not go so far as to call this a brain-burner, but some mental gymnastics are necessary to play competitively. So I’ll concede that there is a challenge here, but challenge alone does not an interesting game make. Just ask the guy trying to find a needle in a haystack.

After a single play, a sound winning strategy was unclear to me. It seems that there are meaningful choices to influence one’s chances of winning (mainly to do with keeping in-hand tiles that could be melded immediately), but the game overall does not grab me to the extent that I am motivated to discover what these are. Not that I’d refuse to play this with my children – compromise is a key aspect of our gaming choices – but it’s not a game that I’d suggest often.

Child Geeks should find that making, breaking, and reassembling sets is a stimulating and creative puzzle-solving exercise. Apart from fitting comfortably into small hands, the tiles also clack satisfyingly when placed on the table. My children are fierce Rummikub competitors, giving the adults a run for their money (again, Father Geek is keen to point out that no actual money is involved). Sure, they have a lot of plays under their belt, but I suspect that the learning curve is not to difficult for younger school-aged children to negotiate on their own. 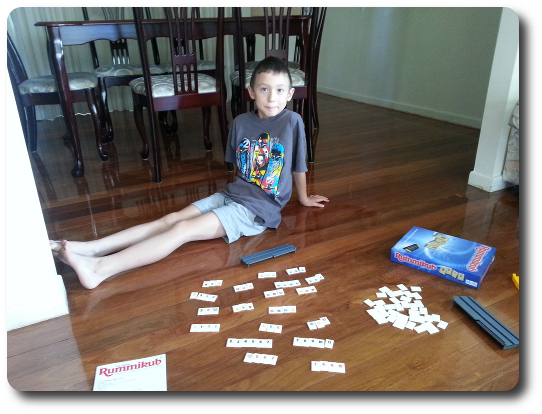 Lounging in the lounge with a relaxing game of Rummikub

Parent Geeks will approve of the simple, traditional mechanisms, durable components, and low price tag. If played as one or two rounds only, without bothering to keep score, it is a reasonable filler. Playing a full game, rules as written, is only recommended for devotees of other melding games.

Gamer Geeks will consider this too simple and, in combination with the lack of theme, there is not much for them to like. There are plenty of games in which melding is just one mechanism and not the entirety of gameplay, and these are more appealing to the hard-core gamer.