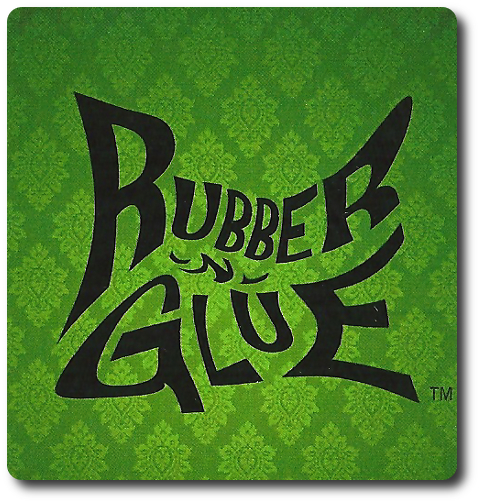 English novelist Algernon Blackwood said, “And so with all things: names were vital and important.” Many societies see titles and names as significant aspects of everyday life. They are used to communicate public status, wealth, and prestige. They are also used to slander, belittle, and besmirch. In this game, players will attempt to complete a title that would befit royalty, while opponents seek to make them paupers at every turn.

Rubber-N-Glue (i.e. Rubber and Glue), designed by David Kearney and published via the Game Crafter, is comprised of 64 Adjective cards, 36 Noun cards, and 4 Rubber cards. The cards are as thick and as durable as your standard playing card. No illustrations or artwork is used in the game. Not included in the game, but nice to have, is a pen or pencil and a piece of paper to keep track of players’ scores.

To set up the game, first shuffle all the cards together to form 1 large deck.

Second, deal to each player 5 cards, face-down. Players should look at their cards but keep them hidden from their opponents until played.

Fourth, decide how many Hands should be played. A short game consists of 1 Hand. A game that is “Best Two Out of Three” would be 3 Hands. Record the number of Hands to be played.

That’s it for game set up. The player who set up the game is the Dealer for the first Hand. The first player to start the Hand is the player to the Dealer’s left (going clockwise).

Rubber-N-Glue is played in turns with no set number of turns per Hand. A player’s turn is summarized here.

The first thing a player does on their turn is draw the top-most card from the draw deck and add it to their hand of cards.

Step 2: Discard One Card or Play One Card

The player must now make a choice. If the player chooses to discard, they select any card from their hand and place it face-down in the discard pile.

If the player chooses to play a card, there are several rules that must be followed. 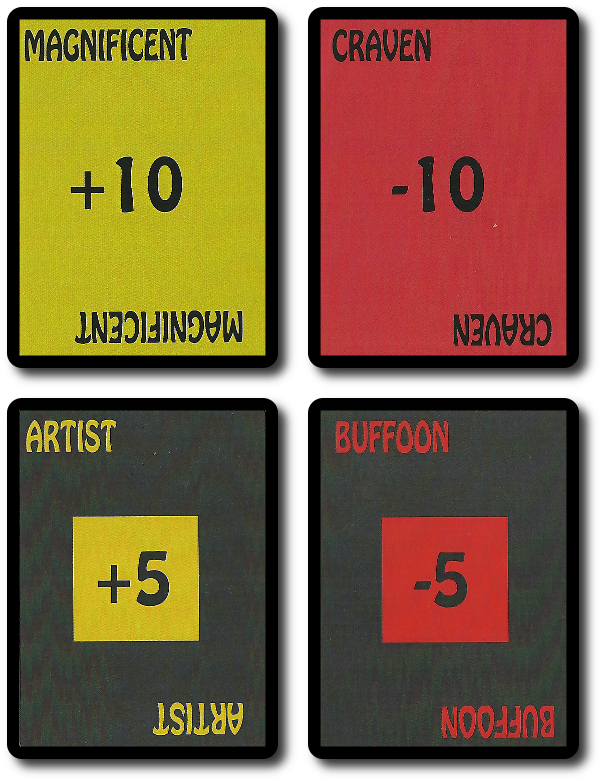 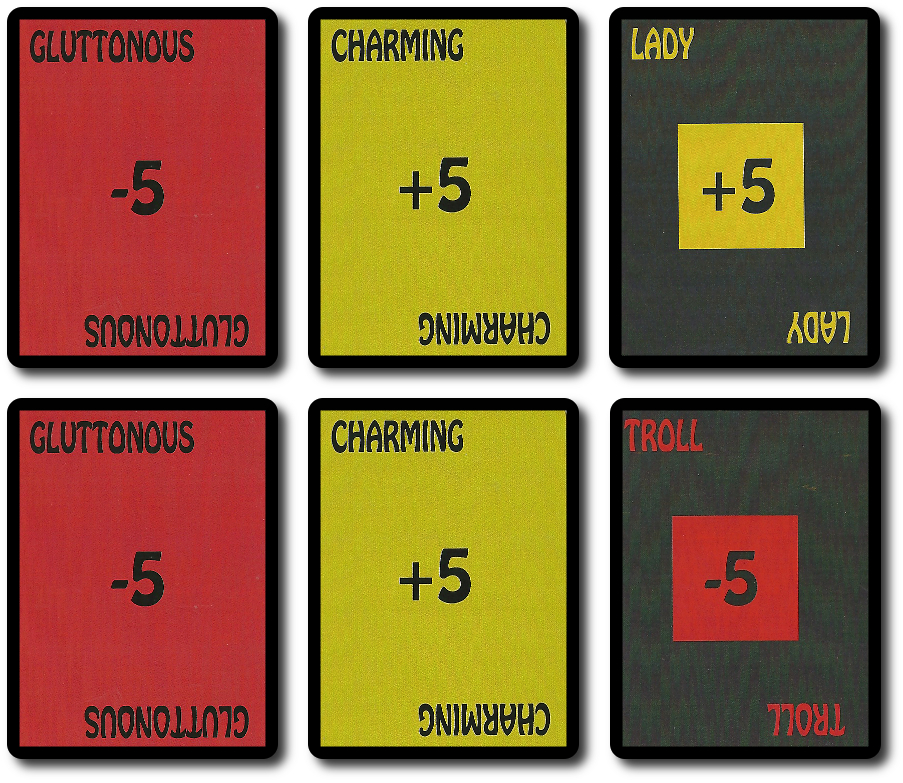 Like magic, the gluttonous charming lady has turned into a troll! Well, that might not be magic… 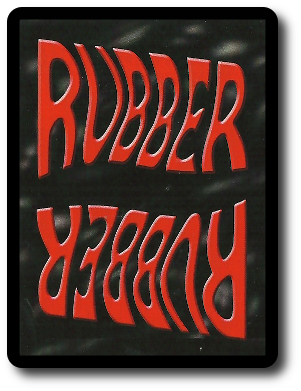 A player can “Glue the Table” 2 different ways. The first is by playing 3 Rubber cards during the player’s turn. The second is to end the turn with any player’s Title that consists of the same 3 number values.

When the table is “Glued”, the Hand comes to an immediate end. No additional turns are taken. Players now count the points earned by their Title. There will be negative values and even a few players who score zero points. The points earned for each Title are recorded.

If no player is able to “Glue the Table” before the draw deck is exhausted, each player takes 1 final turn after the last card is drawn. The table is then considered “Glued” and points are calculated.

If playing a single Hand, the player with the most points wins the game. If playing multiple Hands, record the scores, shuffle the cards, and deal a new Hand. The next Dealer is always the player to the left of the last Hand’s Dealer. After the agreed upon number of Hands has been completed, add up all the points to determine the winner.

To learn more about Rubber-N-Glue, visit the game’s web page.

The Child Geeks quickly grasped the game’s rule and got right to making silly and sometimes profound titles. Their excitement and attention began to drift, however, when the games took longer than expected. The game rules allow players to play cards on any opponent, including the player’s cards. Since none of the players wanted the table to be Glued early, they would often slap a single negative or positive Adjective or Noun card on an opponent who was getting close. The Child Geeks understood that the game was not about making lots of points each Hand. Rather, the goal was to skunk opponents as quickly as possible. To this end, the Child Geeks were tripping each other up causing games to last a good deal longer than anyone expected. According to one Child Geek, “This game is really easy. What makes it hard is the other players.” Another Child Geek said, “This game annoys me a little. Just when I am about to Glue the Table, I have a bad card dropped on me.” These feelings lasted through every game we played. When the games were all over, the Child Geeks were mixed about the games overall entertainment value. About half of the Child Geeks thought the game was amusing enough to approve, while the other half didn’t find the game amusing at all. The end result was a mixed endorsement from the Child Geeks. 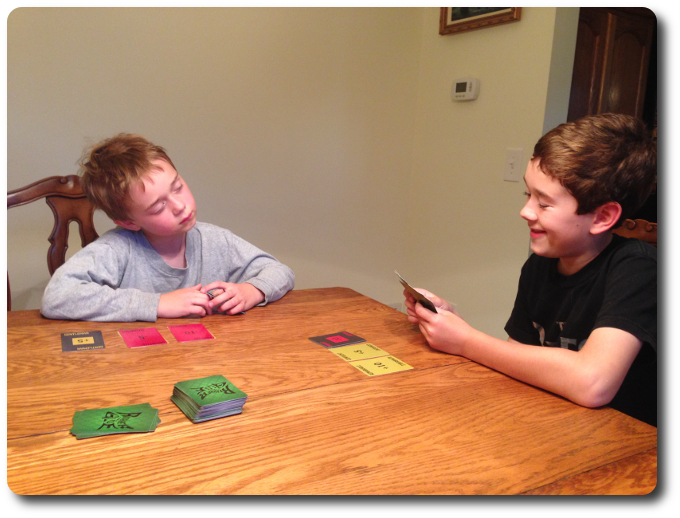 The Parent Geeks discovered the same thing that the Child Geeks did while playing the game. Rubber-N-Glue is not a game you can easily win due to your opponents messing with all the Titles. One Parent Geek said, “I cannot seem to get a good foothold in this game. The best I can hope for is that another player doesn’t want to do anything with my Titles until it’s too late for them to stop me.” But that never really happened. According to another Parent Geek, “I’m convinced that this entire game is based on luck. Your lucky if the other players ignore you and your lucky if you have enough Rubber cards to fend off those who don’t.” Like the Child Geeks, the Parent Geeks were amused enough to like playing the game, but not overly thrilled by it. They also gave the game a mixed level of approval, finding Rubber-N-Glue to be interesting, but not overly entertaining.

The Gamer Geeks hated Rubber-N-Glue According to one Gamer Geek, “This is a worthless game. All I am doing is playing to piles of cards over and over and over again. Why would I ever want to discard? Even a positive card could be enough to keep an opponent from winning. Of course, that would mean I keep the game going, which means I lose.” Another Gamer Geek said, “The game has some interesting ideas, but is not nearly deep, strategic, or tactical enough to be of any interest to me.” A few of the Gamer Geeks found the game’s rules and game play to be absurd, while many more level-headed Gamer Geeks believed Rubber-N-Glue was simply not a game for gaming elitists. When all the votes were in, the Gamer Geeks rejected the game.

I didn’t much care for this game. It positions the adjectives and nouns as something of importance to the player when they serve no real purpose whatsoever. All that matters is the points on the cards. Without any benefit to the player for crafting Titles that were funny or otherwise, everyone stopped paying attention to the words.

There are only 3 decisions to make during the game on a player’s turn. Do they play a card or discard a card? If they play a card, should they play it on their piles or on an opponent’s pile? The questions are important, but not necessarily the answers. Since every player has the same choice with no way of getting the upper hand, the entire game playing experience quickly lost its appeal. Two players games were borderline worthless and anymore than 4 players is an exercise is anger management.

Yes, the titles were funny at times, and yes it was entertaining to skunk opponents, but that kind of fun should only last about 10 or so minutes. Some games took as long as 1 hour to complete. Talk about grumpy players. Some games took less than 30 minutes with the same number of players simple because of the random distribution of cards. It was difficult to narrow down what the difference was between a player who could win the game and the player who couldn’t. All of the observes agreed that there was no one single magical formula at work, but luck was most certainly a huge factor.

As games go, Rubber-N-Glue is nothing spectacular. It didn’t enthrall our players, but nor did it completely disappoint them. The term “Meh” was used a lot to describe it, meaning the game was neither good or bad. Lack of enthusiasm from the players certainly didn’t help, but I think there is more to it than that. Rubber-N-Glue somehow disappointed our groups and I’m not sure how. The best I can guess is that everyone thought the game would be humorous. It’s not. Unless you find random name generation interesting, in which case, you should get a chuckle. As for me, the game left me shrugging my shoulders. Happy to have tried it, but I won’t be playing it again. If you think the game sounds interesting, give it a try.