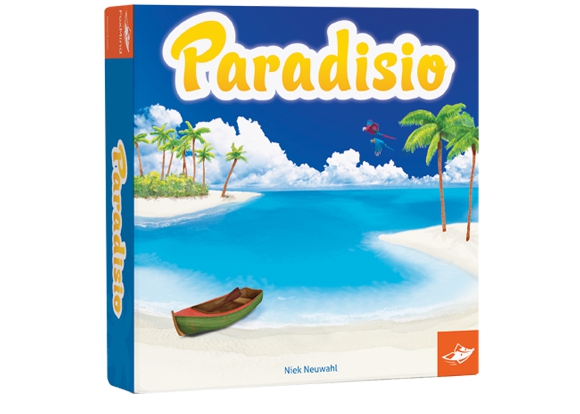 Vibrant blue waters, pristine beaches, and a lush tropical paradise are yours to explore and to build. Create a vast island or smaller archipelagos surrounded by bluer than blue waters. Paradise is only a tile or two away, but be careful to not get lost in the beauty. Each turn of the beach, each curve of the shoreline, and every cove needs to be connected. Fail to build your island paradise correctly and your utopia will quickly become a dystopia!

Paradiso is comprised of 16 square wooden tiles, 5 Island tokens, and a cloth bag. The tiles are solid wood with a printed image of water, land, or beach (which is both water and land). The detail and color is outstanding, complete with waves, birds, boats, sandy beaches, tropical huts, and lush tropical forests. The Island tokens are also made of thick wood with a printed palm tree on one side. The bag can contain all the game pieces if needed, but this is unnecessary as the entire game fits easily in its box. When playing, you’ll most likely use the cloth bag to blindly select tiles, but not to store the game.

To set up the game, both players randomly select 8 wooden tiles each. This can be done by placing the 16 wooden tiles face-down or simply draw them from the cloth bag. Once selected, the players should place the wooden tiles they selected face-up in front of them. The tiles of both players are visible at all times.

Determine which player should go first. The first player places one of their tiles, face-up, in the playing area. The second player now places one their tiles, connecting to the original tile. Play continues with each player placing their tiles until the endgame condition is met. 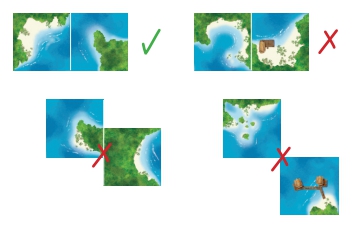 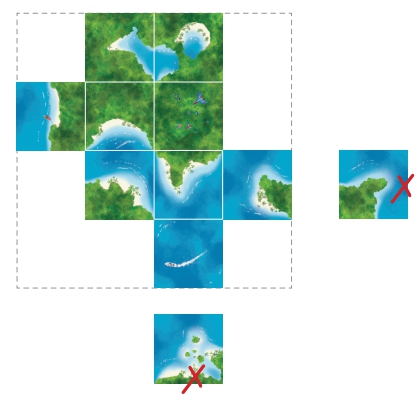 Each player continues to take turns until one player can no longer place a tile in the 4×4 grid play area and have it match an exiting tile’s printed image. The player who placed the last tile is declared the winner of the round and receives an Island token. The game is then restarted with each player randomly selecting 8 new tiles. The player who lost the previous round is the first player to place a tile.

If all 16 tiles are placed, the round is considered a draw, neither player receives an Island token, and a new round is started.

The game ends when a player has collected 3 Island tokens.

Paradisio can be played as a solitaire game, too, with 3 levels of difficulty. Regardless of the difficulty level, all 16 wooden tiles are placed face-up in front of the player. Only the basic “Level 1” build is provided in the rule book. The rules for “Level 2” and “Level 3” are available online from the game’s official web site.

To learn more about the game, including the 2-player and solitaire rules, see the game’s official web site.

Both of my two oldest little geeks (ages 7 and 4) are fans of Carcassonne and City Square Off, two games that require the player to place game pieces during the game to build. Carcassonne requires the player to build the world with rules in place that state how tiles can be matched together while in City Square Off at least one square side on a new tile must at least touch one square side of a tile already in play in order to be considered a legal placement.  Paradiso should be warmly welcomed by my little geeks as it uses these same rules and should be very familiar to them.

Visually, Paradisio is excellent. Detailed images of beaches, surf, trees, and water abound. One cannot help but just look and start putting the pieces together to make a bigger picture. This was most certainly the case for my 2-year-old who was more than happy to simply play with the game pieces like blocks. It is pretty cool watching your youngest child show genuine interest in games, even if they do put them in their mouth from time to time.

Turns out, they didn’t have any and were ready to play. While I got the game ready, I asked my little geeks their thoughts.

“I really, really like how you get to build the islands. It looks really cool when you are doing it.” ~ Liam (age 7)

Looks like both of my little geeks are excited and ready to go! Here’s hoping they enjoy the game and get at least one Mighty Morphin’ Island in play.

As expected, the game was a success! My little geeks very much enjoyed the puzzle element of the game and the logic needed to place the game pieces. It is more than just matching sand to sand and water to water. The players know what pieces they have and must constantly review the current wooden tiles played to ensure they do not get stuck with tiles of their own. This is especially true as the game progresses and the area in which the players can place their tiles becomes defined by way of the 4×4 grid playing area limit.

There is also a sense of exploration as you place a tile and see that the subtle turn in the beach that was left empty now ends in a cove or a large stretch of Caribbean blue ocean now washes up on the shores of a new island waiting to be explored. The visual changes kept the game appealing long after you’d suspect the players would be happy to move on to something else. Even when not playing the game, the wooden tiles still get attention. My little geeks enjoy spilling out the tiles and building maps, telling me stories about buried pirate treasure, and where the cannibals live.

I can’t explain that last one…

My only complaint (and I use the term loosely) is that you are forced to visit the game’s official web site to get the complete solitaire rules. There are three levels of difficulty when playing solo and the rule book only describes one, pointing the reader to the game’s official web site for the rest. This seemed unnecessary to me and I can only imagine that this was done to reduce the overall number of pages necessary in the rule book (as the rules are translated into 4 different languages) or they just hadn’t figured out the other two levels of difficulty yet.

That being said, the solitaire game play is well worth your time and challenging. I suggest you use the “Level 1” as a training exercise to help teach the game or play the game cooperatively. “Level 2” and “Level 3” are more complex because of more rules only, but serves as a great opportunity for you and your little geeks to sit at the table and work on the game together. We played “Level 2” solitaire the most with only one sea and many islands. There is just something about the idea of visiting these remote tropical islands in a sea of blue that is instantly appealing. 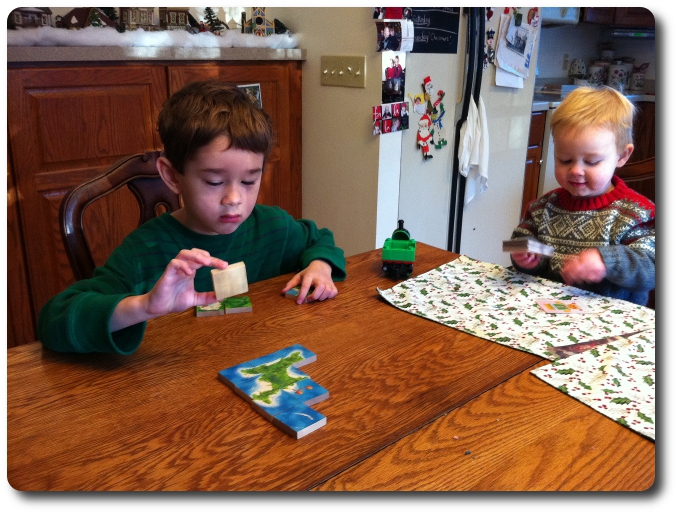 Gamer Geeks, this is a very simple tile placement game that has strategic elements and basic risk vs. reward. There is enough in the game where you will enjoy it, and if you play with the right player, you should expect some serious competition and decision making. Timing is crucial as you must play offensively and defensively to ensure that you can always place a tile as you attempt to lock your opponent out. Game play is fast allowing for many games in a single hour which makes it a great way to get the old game brain in gear while waiting for others to show up for your next game gathering. Visually appealing with two modes of play that both challenge and feel rewarding give this game a thumbs up from our Gamer Geek crowd.

Parent Geeks, this is a wonderful 2-player or solitaire game that can also be quickly turned into a cooperative experience. The tile placement rules will make you and your little geek think ahead as you review your tiles, calculating the best placement and timing for each to ensure that victory is close at hand. You’ll finish a map and want to play more or, at the very least, visit the tropical paradise you just created. No more than 2-players can enjoy this game when played competitively which won’t allow you to play this game at parties or with a group of friends.  A more intimate game experience is intended and is worth it.

Child Geeks, this is a wonderful game where you get to build a paradise full of islands and coves, deep jungles and clear blue waters. There is something new discovered each time a tile is played and you’ll find yourself enjoying how the little world you are building comes together right before your eyes! This is also a great game to simply sit down by yourself and have fun with by building different islands and making what my little geeks call “Pirate Maps”. For a challenge, try the solitaire rules, or sit down with an adult and work on the game together.

My little geeks and I are very pleased with Paradisio and never would have expected something so visually appealing and fun to come from such a little box. The quality and colorful components will ensure that this game will be much loved for a long while making the purchase a solid investment. What it lacks in complexity is made up for in subtle game play and light strategy making the game an enjoyable experience for a wide age range and game skill levels. Do explore this little gem if you get a chance and dream of warm waters, sandy beaches, and fruity drinks with umbrellas.