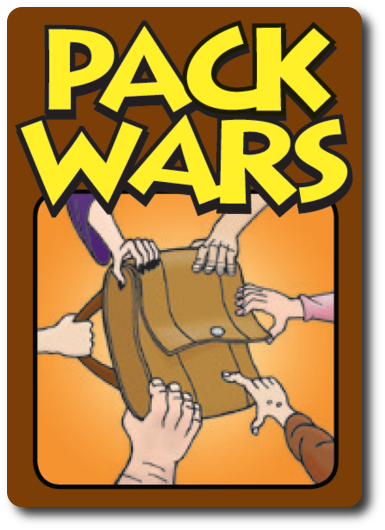 The Heroes have successfully slayed the dragon, saved the town, and have a lot of treasure to spend. All of the loot needs to be packed up and that’s where you come in. As a Hireling, your job is to divide up the treasure and carry it on your backs. The thing is, you are lazy. Oh, gods, are you lazy! Why work harder than the next Hireling?

Pack Wars, designed by John Harris (I), William Sininger and published by Prolific Games, is comprised of 42 Item cards, 60 Action cards, and 6 Hireling Marker cards. The cards are as thick and as durable as your standard playing card. The game itself is based in the same universe as a previous game titled Hirelings: The Ascent.

Item cards represent the different bits and pieces of treasure the Heroes have acquired and the Hirelings must now transport. Each Item card has a weight class (Super Light, Light, Average, Heavy, and Extra Heavy) and a weight number (both values are used by certain Action cards and for scoring). Item cards are placed in the “Loading Zone” during the game. 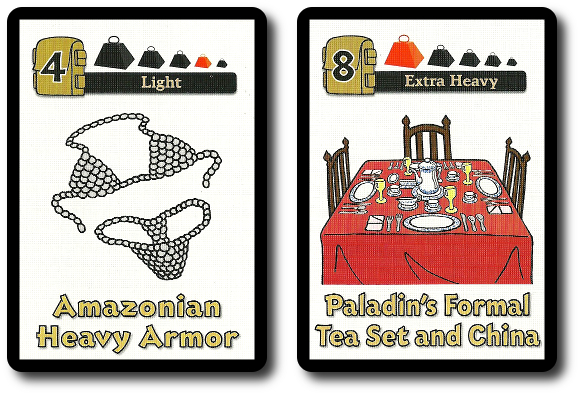 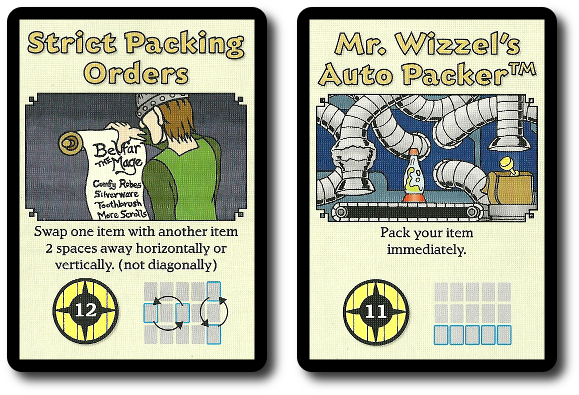 The Hireling Marker cards are used to help the player visualize the Hireling they are playing as during the game and are strategically placed in the surrounding area of the Loading Zone. 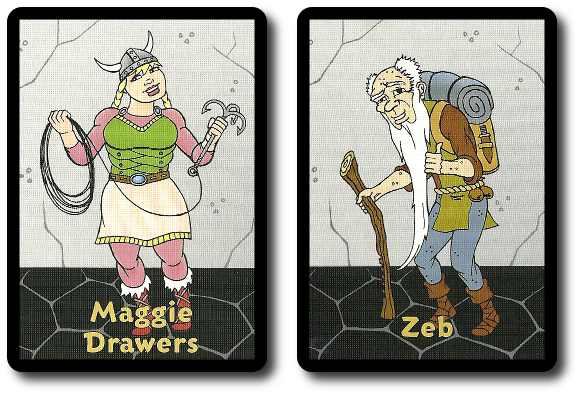 To set up the game, first separate the Item, Action, and Hireling Marker cars into different piles.

Third, deal 15 item cards, face-up, to form a 5×3 grid of cards. This area is referred to as the Loading Zone. All players should be able to see and easily reach it. Designate one of the long edges of the grid as the “bottom”. Set the Item deck face-down to one side of the game playing area.

Fourth, deal 5 Action cards to each player, face-down. These cards represent the player’s starting hand. Set the Action deck face-down and to one side of the game playing area.

Pack Wars is played in rounds and turns. A round of game play is summarized here.

Each player now selects two Action cards from their hand and places them face-down in front of them. The order in which they are placed is unimportant.

Each player now reveals one Action card, flipping it face-up and setting it back down on the table. All players do this at the same time.

After the first Action cards have been resolved, players reveal their second Action card and the process of resolving them is repeated.

After the Loading Zone has been manipulated and Item cards have changed positions, each player now takes the Item card that is DIRECTLY above their Hireling Marker card and places it face-up in front of them. This area is referred to at the Hireling’s “Backpack”. Note that the Item card taken is “normally” the one directly above the Hireling Marker card. Depending on certain cards, the Item card taken by the player may be different. In addition, some Action cards force players to take Item cards prior to this step. In which case, it’s also stored in the player’s Backpack.

Step 7: Next round and Determining Hireling Order

All players now add the weight number value of each Item card in their Backpack that was picked up this round (not the total weight value). The player with the heaviest items is the next round’s first player, followed by the next heaviest and so on. All players now pick up their Hireling Marker cards and place them again at the bottom of the Loading Zone in the order determined by their item weight. Ties are broken by determining who has the heaviest Backpack overall (counting the weight of all the collected Item cards so far).

However, if all the players picked up the same amount of weight or none of the players collect an Item card during the round, all the Hireling Marker cards remain in their current position. The first player is determined by counting all the Item card weight values collected so far with the heaviest going first.

The Child Geeks quickly learned the basics of the game and got into the spirit of moving stuff around, overloading their opponents in the process. To quote one Child Geek, “This game reminds me of that one game where you use shells to hide a ball and then shift it around to move its position.” Pack Wars does have a “shell game” vibe to it if you consider that everything in the Loading Zone can shift position. Another Child Geek said, “The game can be really frustrating at times, but I like how you can always move heavy items to other players.” Yes, you can, if you have the right cards. When the games were over, the Child Geeks voted to approve Pack Wars.

The Parent Geeks found the game to be casual, light, and best of all, deep enough to keep them engaged without feeling overly heavy as a result. As one Parent Geek put it, “I don’t play many games, but this is a card game I could play again easily. I really like how fast it plays and how much fun it is.” Another Parent Geek said, “An interesting mix of strategy and light tactics. I found the card game to be just as entertaining as determining what my opponents would be doing.” The game does give the players a lot of information, but not enough to do anything other than make a “possible” good decision. This was not lost on the Parent Geeks and they found it entertaining to see their plans both explode and implode during the game. After all the items were packed, the Parent Geeks voted to approve Pack Wars.

The Gamer Geeks found the game to be amusing, but not overly engaging. They all readily admitted that the game was light, but had enough going on to be of interest for short bursts of game play. As one Gamer Geek put it, “I’d play this game again, but only as a filler. I don’t think I like it enough to play it too often with my friends, but I’d play this with my family and kids.” Another Gamer Geek said, “The game is OK. A bit to chaotic and nonsensical for my taste, but it kept me entertained enough to not leave a bad taste in my mouth.” From the Gamer Geeks’ perspective, Pack Wars packed enough punch to be a viable filler game, but little else. This split the Gamer Geeks, between those who agreed the game had merit and others suggesting it was an interesting distraction, but did not warrant long-term play.

Pack Wars is light and fun, but also a thinker. You have to manipulate the Loading Zone and your opponents to do your very best to get the lightest item possible. That is, by no means, an easy task. Players may have themselves believing they have the perfect Action card combo (and indeed they might), but all it takes is an Item card being subtly shifted to move the player’s plans well into the territory of total disaster. This is one of the more entertaining aspects of the game. The Loading Zone is always changing, which may initially have players assuming the game is pure chaos, but it is in fact controlled chaos.

The rules that change the Loading Zone are not random.  You can determine, based on Hireling Marker card placement, how opponents may or may not want the Loading Zone to shift. Using what information  you can, you select the best Action cards available to you to either skunk an opponent, snag a light item, or both. Since the game is only played in five rounds, players don’t have a lot of time to make mistakes. This puts a great deal of pressure on picking the right Action cards as quickly and as consecutively as possible. For such a little game, Pack Wars keeps you loaded with fun.

Do try this entertaining game when you next get a chance. I find it to be perfect for playing with casual players, non-gamers, and even gaming elitists as a quick filler that entertains and challenges without fail.