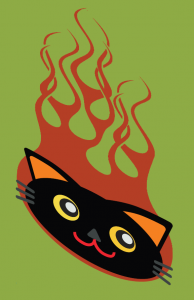 Mi Gato se Incendia! (My Cat is on Fire) is a print-and-play game by Benjamin Gerber, available as a download from DriveThruRPG.  Benjamin kindly provided a review copy to Father Geek.

The game consists of one board and 180 cards divided into 2 decks, an Action deck and an Event deck. Pawns representing each player and Mi Gato can be scavenged from other games.

The goal is to be the one to catch Mi Gato before it loses all 9 of its lives. This appears to be a dangerous neighborhood, and flammable to boot: Mi Gato encounters danger at every turn, especially in the guise of fire. 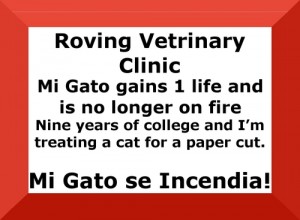 The board is essentially a 7 x 7 grid through which the players pursue Mi Gato. Both Mi Gato and players move between orthogonally adjacent spaces, although fences block player movement (but not Mi Gato’s movement) in some areas. Each player begins the game with a hand of 5 Action cards. On his turn, a player draws an Action card, and then can play any number of Action cards, take a one-square move and/or make one attempt to capture Mi Gato. The Action deck includes the following cards:

In order to catch Mi Gato:

At the end of each player’s turn, an Event card is drawn. These cards cause Mi Gato to move, catch fire, or lose lives. If Mi Gato is on fire, its movement is restricted to one space per turn and it continues to lose one life per turn thereafter.

In fairness, as the designer took care to point out, this is not a children’s game. Rather, it is a parody of a game (I mean that in a complimentary sense!), hence its ridiculous theme and simple mechanics. Much of its entertainment value is derived from the humorous flavor text on the cards, containing pop culture references that only adults or older children would appreciate. This characteristic would likely limit the game’s replayability among adults, although it may have some enduring value as an occasional filler or prelude to a longer gaming session.

The subject matter may cause some parents to steer their children clear. That is a personal decision for each parent to make; children are not the target audience in any case. From my perspective, the game may make light of the cat’s misfortune, but it stops well short of encouraging cruelty to animals, so I have no problem exposing my children to this game.

While the variety of Action cards makes the game more interesting, I have two concerns about these cards. The prospect of having multiple Catnip cards in play simultaneously might  lead to unnecessary complexity in what is otherwise a very light game. Secondly, allowing endlessly cascading Failure cards sounds rather messy to me.

I expected that my 5 year old son would enjoy reading the cards, and that my 4 year old daughter might enjoy helping/observing, but would not be able to play independently. For the most part, they have been spoiled by the excellent artwork and production values of other games in their collection, and by comparison, the aesthetic aspects of this game will seem rather rudimentary.

Preparing the cards took me about 2 hours (printing then cutting; it would have been much quicker if I had had those pre-perforated Avery sheets of business cards). Consequently, my children’s curiosity was piqued a full day before we had the chance to play the game. I was pleased to be playing a game that my daughter could understand, and that would test my son’s reading skills.

We played twice, my son and I winning one game each. Our first game was over after just a few turns, while the second saw us both trawling through the deck for a Net card. This highlights that the tempo of the game is highly dependent upon the cards drawn. Although this game is more random than our usual choices, it can be quite refreshing to play a game without much strategy, so that children and adults can compete on equal footing.

Both of my children enjoyed this game, as I had predicted, even though we were not quite rollicking with laughter at Mi Gato’s plight. I was particularly impressed that my son needed very little assistance with reading the cards. While it will not be at the top of our replay list, I am sure Mi Gato se Incendia! will hit the table again when we are in a whimsical mood. 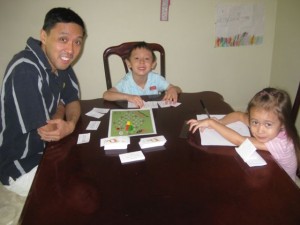 2 Responses to Mi Gato se Incendia! (My Cat is on Fire!) Game Review