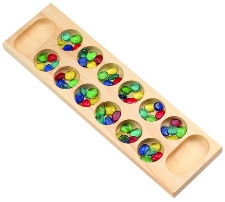 Mancala is technically not the name of the game, but rather a group of games that all share the same game mechanics. Those mechanics being hollowed out “pits” and beads of some type that go in and out of the pits.  The Mancala board I play with (as see in the article image above and below) is comprised of 12 smaller pits, 6 per side, and two larger pits located on the far left and right of the board.  A total number of  48 beads are used and evenly distributed in the 12 smaller pits (4 beads per pit). The players face off with the board between them, six pits per side, and the larger pits to the immediate left and right of the players.

The rules of Mancala also shift depending on the game you are playing.  For reasons of maintaining sanity, I will only address one version of game play here, but I encourage you to go find other ways to play the game if my description is not to your liking.

The object of this version of Mancala is to move your beads into the larger scoring pit to your immediate right. This is done by collecting all the beads in a smaller pit (that is, taking all the beads out of one of the six smaller pits and placing them in your hand) located on your side of the board. You then drop one bead per cup in a counter-clockwise direction (i.e. to your right).  The first bead is dropped in the pit immediately to the right of the pit where the beads were collected.  In this way, you “seed” the other smaller pits with a bead and eventually get to drop one of the beads into your larger scoring pit to the far right.  These beads are now out of the game, as you never take beads from the larger pits, and count as points.  The only pit  you never drop a bead into is the opposite player’s larger pit.  That is, the pit to your immediate left as you face the board. That means, in total, each player only seeds 13 pits; 6 on your side, 6 on your opponent’s side, and their larger scoring pit to your immediate right.

There are only two small rule exceptions that need to be noted.

The game ends when one of the player’s no longer has any beads in any of their six smaller pits on their side of the board.  Each player counts the number of beads in their larger pit to their immediate right.  The player with the most beads wins.

That’s it. That’s the game. Sound confusing?  Don’t worry, it isn’t.  I taught the game to a 3 and 6 year old in less time it took for you to read this.

I really like this game. It’s simple, abstract, and fast. Best of all, it teaches my sons to count, use simple math, and start to use tactics and strategy in a very comfortable fashion.

Counting wise, my sons have to pick up all the beads in a pit and then I ask them to count each one of the beads they drop.  “One, two, three…”, they say. This reinforces number recognition and also requires them to do simple math as they need to understand how many beads it will take to drop at least one into their larger scoring pit.

Regarding tactics and strategy, this game does a fantastic job of introducing the two concepts in a way that is easy to grasp.  Strategy wise, my sons need to determine how they want to win the game.  The object of the game is not the strategy; it is simply the end goal.  Strategy is the plan of action to achieve the specified goal.  Some of the strategies include scoring points by simply moving all of their beads into their larger scoring pits or doing as much as possible to force bead placement for easy capturing. 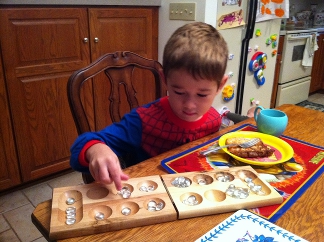 Once my sons have their strategy for victory, they must then work on their tactics.  Tactics being “how” they accomplish their strategy.  In game terms, this is almost always maneuvering. Do my sons want to force their father to move beads or do they want to make sure they move as few beads as possible onto my side of the board? Their individual tactics are based on their understanding of their strategy and it is fascinating to watch them think things through.

I couldn’t be prouder (*sniff sniff*).