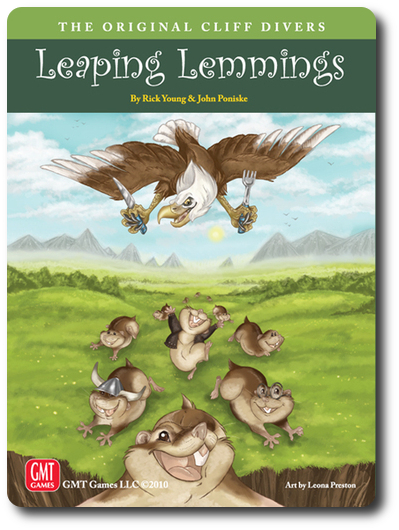 Leaping Lemmings, designed by Rick Young and John Poniske and published by GMT Gamesin 2010, is a hex and counter game for children and the young at heart. Players control up to 10 lemmings each and race them across a narrow stretch of clear terrain dotted with a few bushes, in an attempt to hurl them off the cliff edge before eagles eat them instead. The game components include: 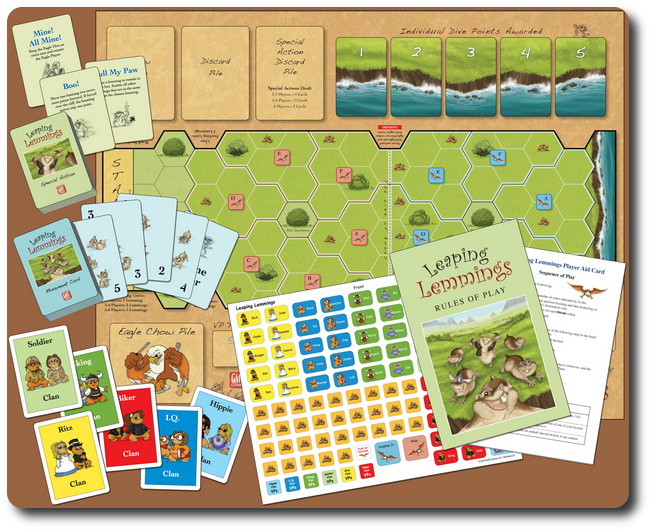 Everything that comes in the game!

The Move deck is shuffled, with the Game Over card placed randomly within the last 7 cards. Two to four Special Action cards are dealt to each player. All lemmings are placed within the starting zone. Pellet markers are mixed, face-down, and placed on designated hexes on the map.

On each turn, the active player, also known as the “Eagle player”, rolls the Eagle dice and moves the two Eagle counters accordingly. If there are lemmings in open terrain within an Eagle’s hunting zone, one of them will be eaten and any other lemmings in that zone will be scattered to nearby hexes. Then the top card of the movement deck is turned over and all players, beginning with the Eagle player, move one of their lemmings towards the cliff the number of hexes indicated on that card. A player whose lemming leaves a hex with a pellet marker collects the marker, thus gaining 1 or 2 bonus victory points or a “Favor” for later use. Any lemmings that reach the cliff edge with movement points to spare will leap off, earning 1 to 5 victory points depending on the number of movement points left. Immediately before moving one of their lemmings, a player may choose to play a Special Action card or cash in “Favors” to obtain specified benefits.

Visual example of the lemming running area on the game board

The game ends immediately when the Game Over card is drawn from the Move deck. Players score victory points for their leapt lemmings, unused Special Actions, and collected pellet markers. The player with the most victory points wins the game.

GMT Games is one of my favorite publishers, more renowned for board wargames, but venturing into very different territory on occasion. In this case, the two designers are respected wargame designers: for example, Rick Young designed Europe Engulfed and John Poniske designed Hearts and Minds: Vietnam 1965-1975. While the comic theme is a significant departure from their previous titles, the designers’ background is still evident here, with key game concepts such as hex stacking limits, pinning units, movement points and terrain costs. While the rules are simple, I was expecting this game to be even simpler to match the levity of the subject matter. So I was unsure whether this would work with my 7-year-old son, even though he enjoys some quite difficult games such as Le Havre and Caylus Magna Carta. Because of the brief rules and short playing time, we chose to try this when we had an hour and a half to spare before lunchtime.

So far, I have only played this game twice: a 2-player game with my son and a 5-player game with both my children, my sister and brother-in-law. The 2-player version is played a little differently – for instance, each player controls one eagle each turn – but it was an excellent opportunity to understand how the game played.

I found this first experience rather dull, which I attributed to the number of players rather than our lack of familiarity with the rules. At any one time, there were very few lemmings in play and the game felt like a straight roll-and-move board race, without much else happening. I still thought that this game had much more potential that we had not seen fulfilled, so the following weekend we tried this again with more players. This was much more interactive and indeed chaotic, with up to a dozen lemmings in play at a time, providing much fodder for the eagles, and Special Actions being played all over the place. It still progressed quickly, with each turn taking about 2 minutes.

My son eked out a narrow victory over me, relying on a tie-breaker as our preliminary victory point count was tied. I was pleasantly surprised that my 5-year-old daughter was able to play with only a little bit of assistance, and she remained engaged throughout the game (it helped that we had an intermission for lunch). 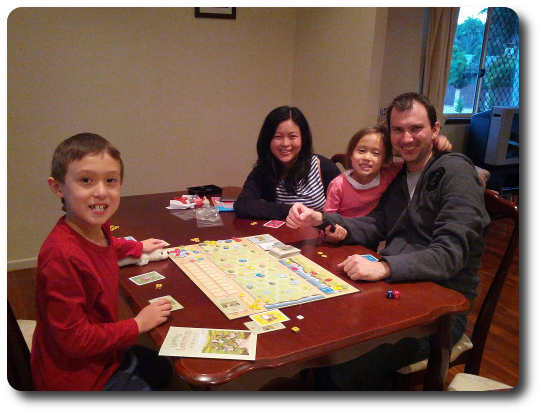 Although there are a few tactical plays available, Gamer Geeks will not find these lemmings meaty enough for their liking. All players receive equal movement point allocations, but in other respects a single player may find himself a hostage to bad fortune and/or being targeted by his opponents. This one is best left to the birds!

Parent Geeks may balk at the less than family-friendly idea of cute furry animals being eaten by birds of prey or else committing suicide, albeit cheerfully and stylishly. Fear not, this is all in good fun and there is no disturbing imagery. Parent Geeks and their children will enjoy this in equal measure. The game can be completed in under an hour if you maintain a good pace, ensuring that all players make their moves without undue delay.

Child Geeks will grasp the gameplay very quickly and will take great delight in the collection of pellet markers, but even more so in the demise of lemmings! Special Action cards can be set aside if playing with pre-literate children.