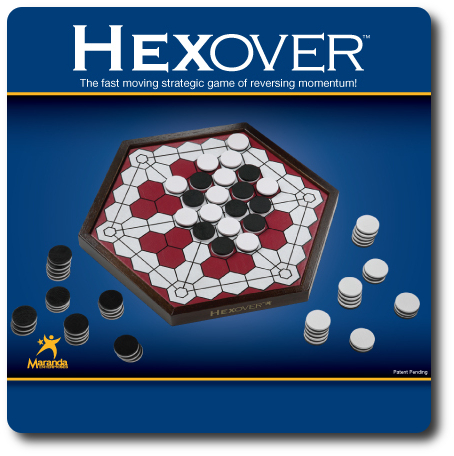 The classic game of Othello is re-imagined and streamlined to present a different sort of challenge to the players. The square grid is replaced with a hexagonal board, but the goal is the same. Outflank and outmaneuver your opponent as quickly as possible to be victorious!

Hexover, by Maranda Enterprises, is comprised of 1 wooden game board and 61 wooden discs. The discs are double-sided with one side being white and the other side being black. All the game components are of excellent quality, which is what we’ve come to expect from Maranda. 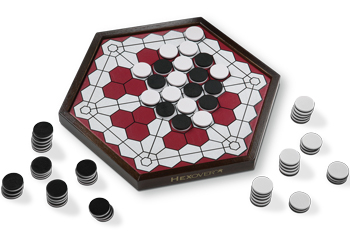 Example of the game components

To set up the game, first place the game board in the middle of the playing area between the two players, with each player facing each other. 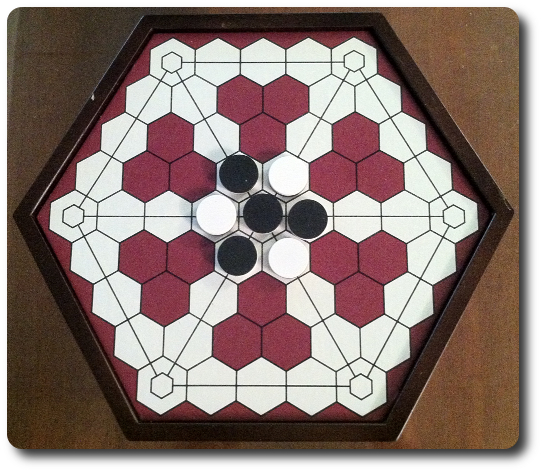 Third, place the rest of the  discs off to one side (or just keep them in the game box) and within easy reach of all the players.

The game is played with each player taking one of the discs not yet played to the game board and placing it one of the hex spaces with their disc color. Discs should be placed so they outflank their opponent’s discs. Outflanking means a row of discs is in-between two discs of an opposing color, one on each end. Once a single disc or a row of discs is outflanked, all of the discs in that row are flipped over to the opposite color. In this way, a player “captures” an opponent’s discs.

If you are familiar with Othello, the game board’s corners are consider the most advantageous spot to occupy as they are very difficult to outflank. Unlike the traditional Othello game board (which is a square), the Hexover game board has 6 corners to control. Additionally, the game board has 6 groups of 3 hexes in red. These hex spaces are available for a player to place their discs, but do not count as part of a winning row. They are, for lack of a  better term, “dead space” in regards to scoring.

The game continues until one of two possible outcomes occurs.

If a player is able to create a single row of 5 or more discs on the white hex spaces (discs in the red hex spaces are not counted towards a row’s total number of discs), they win the game.

If neither player can complete a move on their turn, the game ends and the player with the most discs of their color on the game board wins the game.

To learn more about Hexover, see the game’s web page.

My little geeks have never played Othello before, but they have played games much more complicated. I doubt very much this game will confused or be beyond their skill level. They are also fans of absract strategy games and I am certain they will enjoy Hexover. The same goes for the Parent Geeks and even the non-gamers are going to enjoy this one. The Gamer Geeks might be a bit of a gamble and their level of enjoyment of the game is going to hinge primarily on two things. First, any level of nostalgia they might have for the classic game of Othello, and second, who their opponent is. This is a game where the level of difficulty and challenge is based pretty much on the skill of your opponent. If I put a Gamer Geek across from a Child Geek opponent, I doubt the Gamer Geek will find much about the game to enjoy. Across from a peer with equal or greater skill, and I’m certain they will be engaged.

Teaching the game takes about 2 minutes if you include some brief but very important examples. I made sure to indicate that the “dead spaces” in the game do nothing for points but are very important to set up a winning move or block an opponent’s move. I also made certain the players understood that victory only came from lining up the discs on the white hexes. I didn’t want to have to explain to a player mid-game they were doing something wrong or have a player tell me they lost because I didn’t explain something in detail. Better to be overly thorough than overly disgusted later on. My little geeks, as expected, had no issue learning the game and had no questions, but before we played our first game, I asked them their thoughts on it so far.

“I like it. Simple, like you said, but I can see where the game would get tricky against a good player.” ~ Liam (age 8)

He certainly is, as is his older brother. Let’s see if their skill is equal to their father’s and if the game serves as a medium of entertainment. Or, perhaps not.

At first, Hexover frustrated my little geeks more than entertained them. They quickly became tired of their father winning again and again and again. They asked to play a different game, which we did, but I asked them first to consider two things. First, there is no reason to play a game if you are not having fun. That’s just a simple statement of fact. Second, you shouldn’t dislike a game just because it is something you are not winning. Instead, look at it as a challenge and embrace it.

I know. Perhaps a bit too deep for an 8 and 5-year-old to hear, but parents live for these kinds of moments. Not sure if any of it got through to them, but the next day they were both willing to give the game another try. This time, they played against each other and they both won a game. Their attitude towards Hexover visibly changed and they became excited about.

After they played each other for a number of games over a few days, they both challenged me to a game. They did much, much better. My 5-year-old held his own and proved to be a strong opponent. My 8-year-old won his game with record speed. They both enjoyed the game and ask for it by name when we only have time to play a quick game or two.

Gamer Geeks had mixed thoughts on it. Based on nostalgia alone, over half of those we played the game with enjoyed it. The other half also enjoyed the game, but were not in love with it. All the Gamer Geeks did like the new hexagon board and the “dead spaces” that could be used to stifle a player, but did nothing to win points. They saw this as an interesting new twist on the offensive and defensive game play one must focus on while playing the game. I should also mention that some feelings were hurt when braggarts suggested they could beat anyone in the game and then were unceremoniously squashed by their opponents. They got over it. 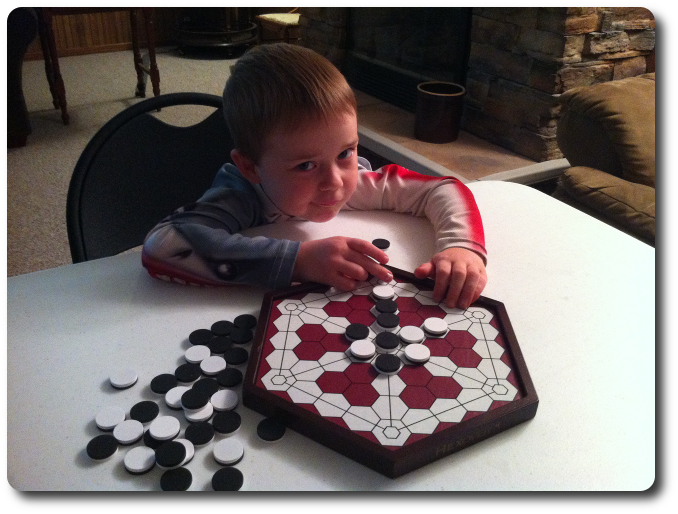 Gamer Geeks, this is the reimagined version of the classic game of Othello, with a subtle new take on game play. Depending on your love of abstract strategy games, you will either enjoy this game or put it aside. However, we found that everyone we played it with enjoyed the experienced and the game served as an excellent reminder that a simple game could be very complex and challenging given the chance to play a skilled opponent. On this note, the Gamer Geeks rejoiced that the game allowed truly skilled players to challenge each other using a game that many had long forgotten. The only Gamer Geeks who didn’t like the game were those who didn’t like abstract strategy games to begin with.

Parent Geeks, this is an excellent game for two players and a good exercise in thinking through game moves. Chess can be rather confusing to little geeks, but introducing games like Hexover at an early age allows them to get used to abstract strategy games and how they are played. This game might best be thought of as a training ground for your young geeks but it also serves as an excellent game to pass the time. A player will only be challenged if their opponent is of equal or greater skill. This makes the game somewhat one-sided until such time a Parent Geek can find a peer who is willing to play or until a Parent Geek’s young protegé have risen through the ranks to truly engage their parents in a contest of gamer geek eliteness.

Child Geeks, this is an excellent game to learn how to play and master. It will strengthen many of your foundational geek skills that are used in much more complex games later on. The game’s difficulty is based on the skill of your opponent. Instead of asking your mom and dad to “go easy on you”, teach a younger sibling or a friend how to play so you can compete against a component of equal skill. Then, when you are looking for a challenge, place the board in front of your parents or an older gamer and demand a game in the  deepest voice you can muster, making sure to speak loudly enough so everyone in the room can hear. If you are going to challenge another player, might as well do it in style!

I enjoyed this game and it brought back many fond memories of my childhood. My three brothers and I played a lot of Othello, Chess, and Checkers when we were kids, mostly because that’s all our grandparents had when we went to visit (no Nintendo back then, kiddies). Hexover is an evolved version of Othello, but not by much. It has just enough uniqueness for me to forgive its overly familiar game play. Like my friend and fellow game reviewer, Ryan Metzler, I enjoyed the “dead spaces” in the board as it provided an interesting new twist to the game. But where the game really shines is how easy it is to play with my little geeks. They are really enjoying it and I can’t help but feel there is a large chunk of my childhood that I am now able to share with my children on a level that I never would have imagined.

If you are looking for a solid 2-player abstract strategy game where strategy and tactical decisions are all important but the game itself has a very easy learning curve to teach young and new players with ease, then do get Hexover on your game table.