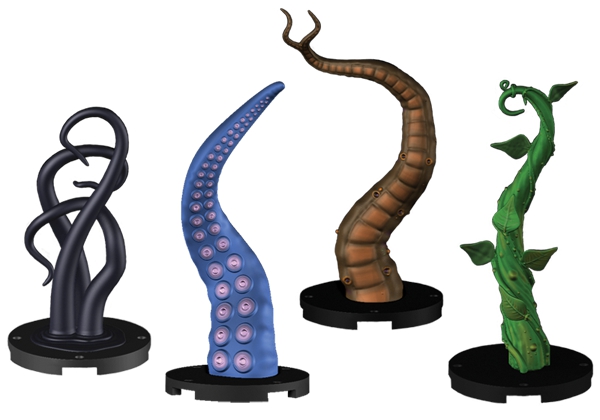 From the Depths is the first release of miniatures inspired by the Dungeon Crawler universe. The miniatures represent a plant vine, an otherworldly arm, a slimy Kraken tentacle, and three stringy grappler tendrils. Each miniature is securely mounted to a plastic black base with a diameter about equal to a U.S. Quarter (24.26 mm or 0.955 in). Other than the grappler tendrils (which are a solid black), the plant vine, Kraken tentacle, and otherworldly arm are exceedingly well detailed and painted. For example, the Kraken tentacle looks slightly dry brushed and each sucker on the tentacle is a perfect pink making them jump out from the tentacle itself. The otherworldly arm has slightly raised bumps that are differently colored than the rest of the arm. The underside of the otherworldly arm not only has a different color, but also a different texture, too. The plant vine also looks like it was dry brushed and is, for the most part, just green but is detailed enough to show the individual smaller vines that make up the whole.

The miniatures’ simple base and presentation make them compatible with just about any miniature game system that uses miniatures in the 25mm to 30mm range. Since “slimy things that grab” are pretty much a given in just about any genre, be it Sci-fi, Fantasy, or Horror, the vast majority of today’s miniature games can use these miniatures with ease, fitting in perfectly to the current theme and narrative.

To learn more about the Dungeon Crawler “From the Depths” miniatures, see the product’s official web page. On that page, you will also find additional information on their future miniature releases, currently titled Omens and Townfolk.

My little geeks LOVE miniatures. In fact, I challenge every parent in the world to find me one child who does not love something in miniature form. Dolls, action figures, you name it. They are miniaturized. Little geeks can see something small and make an incredibly vast and rich imaginative world around it. I remember my brothers and I converting our house into different planets when we would play with our Star Wars toys. The upstairs was the “snow planet”, the main floor was a “water planet” and the basement was a “swamp planet” (on account that it was cold and dark). We would fly our ships and engage our troops on the carpeted plains and on the mountainous pillows. Of course, my mother would become exceedingly exasperated with us, as she would occasionally find action figures in various corners of the house and under couches for the next couple of month.

The level of grief my brothers and I received from our mother was so worth it.

I am pleased to see that this level of creativity and epicness has not skipped a generation. My little geeks convert our home into different worlds on a regular basis. Just the other day, I was told I could not step on the ground as the entire house was sinking into lava. On a previous day, I was told to leave my own room because my little geeks were playing “tomb explorer” and I ruined their game when I turned on the overhead light.

When I showed the miniatures to my little geeks, they were most impressed and immediately wanted to whisk them away to play some pivotal role in their next imaginative game. I was all to happy to let them as I wanted to see how long they would keep the little geeks’ interest and to see how durable they were. Give anything to an excited and energetic little geek for an hour and have it returned to you in one piece is an excellent durability test for anything. Before I turned them over, I asked my little geeks their thoughts.

“These are awesome, Daddy! Can I sleep with them in my room tonight?” ~ Nyhus (age 4)

Already a big hit and they haven’t even touched them yet! Let’s see how much love they still get after an afternoon with the little geeks and see if there is anything left of them to talk about.

SUCCESS! Not only did the miniatures survived their ordeal (or, as I like to call it, “Trial by Little Geek”) but they are still very much loved! Days after they were introduced, my little geeks are still adding them to their play. I even saw the miniatures sharing the floor with Star Wars LEGO sets! WIN!

Durability-wise, all four miniatures survived without a scratch. In truth, this could be the result of the miniatures’ thick plastic, my little geeks taking care not to break them, or both. I personally would like to believe that I have finally instilled in my children the value of keeping track and care of their toys, but all it takes is one quick glance at my floor and count the many, many toys scattered haphazardly to determine this is not the case. We, therefore, can reasonably come to the conclusion that the miniatures are built for battle and can take a beating.

If you are looking for more weight, we found that a U.S. Nickel fits snugly and very well into the base of the miniatures. This solved a few problems for us when we accidentally bumped the mat we were playing on. Four out of five times, the miniatures would fall down. After we put the Nickel on their base, they didn’t fall down once.

Every person who had a chance to use and look at the miniatures were impressed. High quality and well detailed, they were immediate hits. There is just enough included with each miniature to allow it to be recognizable to the beholder, but there is nothing to suggest what genre the miniature belongs to. This makes the miniatures exceedingly versatile and a nice addition to any game that might benefit from slimy tendrils and the like. 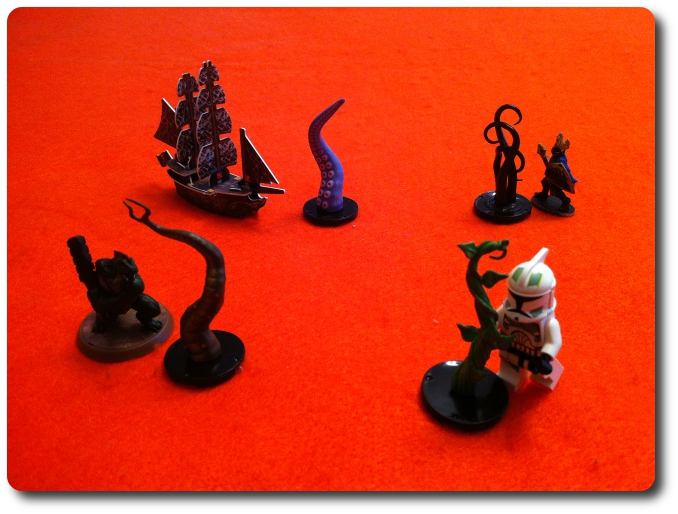 Gamer Geeks, these will be a welcomed addition to your miniature games for certain. Excellent detail, just the right size, and adaptable to just about any miniature game you can think of…as long as that game’s theme is not rooted in real history. Of course, who is to say that the Battle of Gettysburg wasn’t briefly interrupted by a giant flailing of slimy appendages from the dark places of the earth? Pre-painted and ready to go!

Parent Geeks, these are durable enough to play with in just about any setting and lack any small pieces that will break off easily. These will work with any little figures you and your little geeks play with. Introduce them during your next LEGO session or board game where miniatures are used and just see how big your little geek’s smile gets!

Child Geeks, these are fun to add to your growing collection of little action figures. Regardless of their size, you can use these miniatures in your games. Using your imagination, you can easily and seamlessly include them into your adventures.

One Response to Dungeon Crawler Minis: From the Depths Review