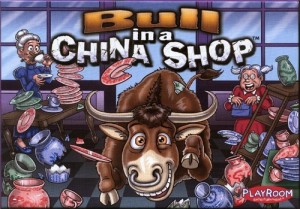 Bull in a China Shop, designed by Michael Schacht and published by Playroom Entertainment and others, is a loosely themed card-drafting game about collectors amassing impressive collections of china while minimizing the inevitable damage wreaked by visiting bulls. Perhaps the collectors should have invested a little time and money posting a “Bulls Not Welcome” sign.

There are two decks of cards. One consists of 40 China cards, in 3 colors (green, blue and red), with values ranging from 3 to 8. The China deck is interspersed with 4 scoring cards, indicating the junctures in the game when players score points for their collections. The other deck contains 30 Bull cards. The decks are placed in the center of the play area and 5 China cards and 5 Bull cards are turned face up. Whenever the last face-up China or Bull card is taken, 5 more cards are turned face-up from the relevant deck.

Each player begins the game with two pieces of Starting China placed in front of him, as well as one Money card and one Pass card.

On his turn, a player has 3 options:

Play then passes to the left.

There are four scoring rounds during the game; these occur when the next card to be drawn from the China deck is a scoring card. Players must choose which of four options to score, each can only be invoked once per player per game:

I acquired this very recently in a trade, as I thought this would be an excellent introduction to card-drafting, a game mechanism that also features in the more highly fancied gateway games Ticket to Ride and Thurn & Taxis. The shorter game duration and silly theme of Bull in a China Shop seem a good fit for younger school-aged children, although the artwork on the cards is far less goofy than you might think, judging from the box art.

I predicted that my six-year-old son would be able to grasp the game play, although he might struggle to select the best scoring options early in the game, with a view to planning for future scoring rounds.

We have only played the game once so far, but I am sure that it will be making frequent visits back to our table in the future. The rules are easy to explain and it only takes a few rounds for new players to understand the flow of the game. The card drafting mitigates luck, especially bad luck, not so much good luck. You are often forced to take Bull cards in order to regain Money, but you usually have options from which to choose the least disastrous. If, instead, the rules required you to draw a Bull card blindly from the top of the deck, you could suddenly find yourself with no China at all!

I have mentioned in other reviews that my son enjoys showcasing his arithmetic skills, and, unsurprisingly, he kept a running total of (and commentary on) the value of his collection. At one stage, he had the chance to score the entire collection for a rather creditable 31 points. He chose to hold out, hoping to improve his position in a later round; alas, this was not to be, but such are the perils of the “learning curve” and no doubt next time he will have a better idea of when his collection has peaked.

Bull in a China Shop runs slightly longer than the typical filler game, but its small form factor makes it otherwise suitable for a great travel game (perhaps not on an airplane though, those tray tables are just too small). If you can find this game in stock for around $10-15, or pick it up from a friend, it is great value for the money. 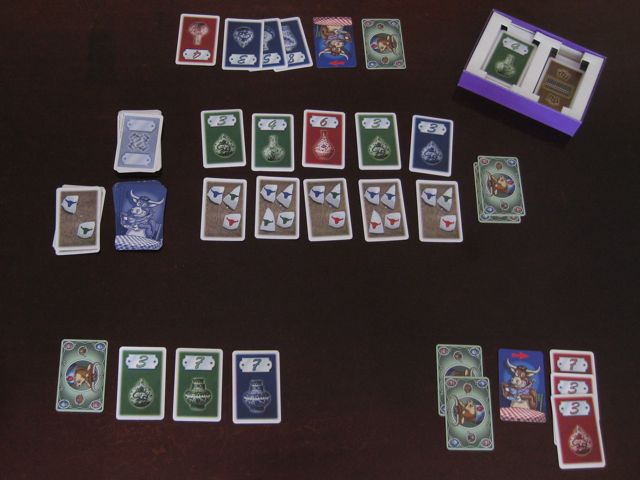 Game in progress ... where are the players?

2 Responses to Bull in a China Shop Game Review