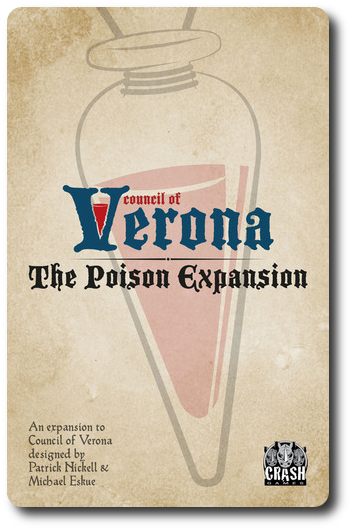 Long have the heads of family yelled and threatened each other over the council table. All for not. The bitter rivalry between the Capulets and Montagues runs too deep to be easily fixed by words. Diplomacy has failed and poison is being used to permanently silence the opposition. Exile, it would seem, is now desirable since the alternative is an early grave.

Of Poison Most Foul

Note: We will not discuss how to set up and play the base game, Council of Verona, in this review. Read our review of the base game for full details on how the game is played, won, and enjoyed.

Council of Verona: The Poison Expansion is added during game set up. Give each player 1 Antidote and 1 Poison token of the same color as their Influence tokens. All the tokens are placed face down so opponents cannot see the number values or identify which token is the poison and which is the antidote.

When the game begins, each player is still only allowed to place 1 token on any Character card that has an available Influence slot. Remember, this is an optional step. Determining which token should be placed depends on the player’s intent.

Before placing an Influence token, a Poison token, or an Antidote token, the player needs to consider a few things.

Note: A player can look at the tokens they have previously played at any time, but cannot remove them from Character cards. Some Character cards allow players to look at their opponents’ tokens as an ability. Very useful…

The endgame for the round is triggered when all the players have played their Character cards. Any remaining tokens may now be placed in turn order sequence (placement is optional). The round ends and scoring now takes place.

For those Character cards that remain and have met their agenda condition, the Influence tokens are counted. Players now calculate the total Influence they have in both card groups by adding their Influence token values, adjusting the total using the Influence slot modifiers. All the scores are recorded on a piece of paper and a new round now begins.

Note: If both Romeo and Juliet die of poison, they are NOT considered “together” per the agenda requirements. It’s a romantic idea, but this tragedy has no happy ending.

After a number of rounds equal to the number of players in the game have been completed, the final score is calculated by adding all the points together. The player with the highest score wins the game!

To learn more about Council of Verona: The Poison Expansion, visit the game’s official web page.

The game expansion was well received by all our players. It added a new option and tactics that every player immediately recognized as powerful and troublesome. Powerful in the sense that players now had the ability to remove Character cards from the game. Agendas could now be met either through card plays or through poison. Token placement on cards no longer indicated a player’s possible interest in the Character card’s agenda. Now tokens could represent a player’s strong desire to keep the Character card in play or out of play. Troublesome in the sense that the game expansion made deducing what was going on in an opponent’s head all the more difficult.

Which every player, again, really enjoyed.

Child, Parent, and Gamer Geeks all suggested that the game expansion be permanently included in the game. I agree. Every once in a while, a game expansion comes along that elevates the base game to new outstanding levels. Council of Verona: The Poison Expansion is such an expansion. The base game is solid and was enjoyed by all our players, from the Child Geeks to the most elitist of Gamer Geeks. The expansion adds more complexity without making the game more difficult to play. This is exactly what you want out of an expansion. It should “expand” the game play depth, tactics, and strategy without adding more weight and time. Council of Verona: The Poison Expansion adds a new, sinister level to the metagame that one cannot help enjoying. Best of all, the expansion fits seamlessly and feels natural. The few expansion rule changes do not rock the proverbial boat, nor disrupt the game’s flow.

Excellent. Simply excellent. This game expansion is a game changer in a very good and exciting way.

2 Responses to Council of Verona: The Poison Expansion Game Review