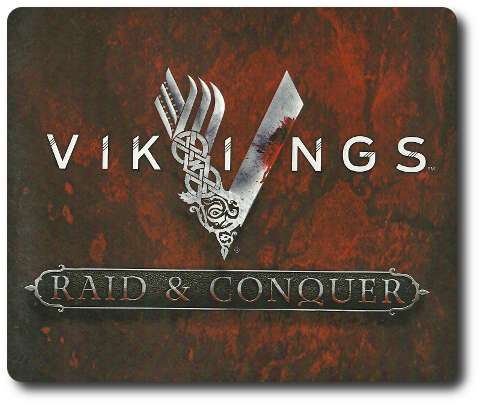 The life of a Viking has been glamorized and made the stuff of legend. Truth and myth have intertwined to create stories and tales of brave warriors who risked it all to find adventure, fortune, and fame. In this game, you must do the same or your name might be forgotten.

Vikings: Raid & Conquer, to be published by High Roller Games, is comprised of 220 cards, 5 Character Shields, 5 Action clips, 1 Earl Medallion token, 1 Quick Raid card, and 1 card layout game board (large). The cards and the game’s overall theme are based on the television show Vikings. Like the television show, the game focuses most of its attention around Ragnar, Lagertha, Rollo, Floki, and Bjorn. Unlike the television series, players will be taking on the role of one of these 5 characters and attempting to crush the other 4. As this is a review of a prepublished game, I cannot comment on the game component quality. The card art are still images taken from the television show. The card layout folds out to reveal a large board with designated areas for cards and rules summary.

Vikings: Raid & Conquer is a deck building game. These types of games give all players the same number and type of cards in the beginning. As the game progresses, players will change the cards they have by collecting new ones and discarding old ones. This means that the game play itself is dependent on two things. First, the availability of cards and second, the particularly play style of the player who is collecting the cards. In all cases, it’s impossible to predict the outcome of game play or individual player turns. What follows is a description and summary of game play. 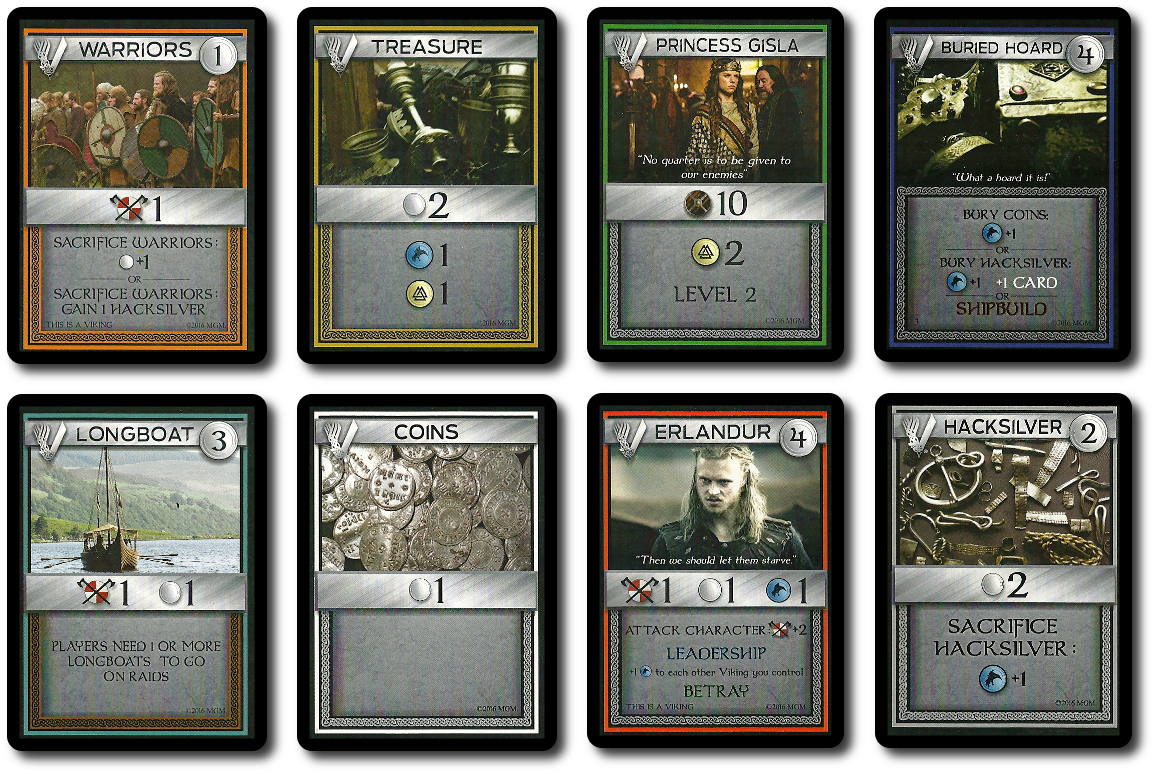 To set up the game, first place the card layout game board in the middle of the playing area.

Second, separate the Coin, Treasure, Longboats, Hacksilver, and Warrior  cards and place them face-up on the designated spaces found on the game board.

Fifth, place the Earl Medallion on the “Winter” space of the game board and hand each player 1 Character shield.

Sixth, give each player 8 Coin and 2 Longboats cards. Players shuffle these cards together, place them face-down in front of them in a single deck. This is the player’s starting deck of cards. They will modify these cards and add to them as the game progresses.

Vikings: Raid & Conquer is played in rounds, phases, and turns for a total of 10 to 15 rounds of game play. These are summarized here.

Winter is comprised of the first 4 rounds of game play and consists of 3 phases per round.

The player draws 5 cards from their deck to create their hand. If the draw deck is depleted during the process of drawing cards, shuffle the player’s discard deck to create a new draw deck.

In turn order sequence, starting with the player who has the Earl Medallion, all the player’s cards come into play. Actions include the following:

In addition, some cards will have special abilities when played. For example, increase in combat, the ability to permanently remove a card from play, and even betraying others.

End of Round Phase

All cards used are placed in the player’s discard pile.

The player draws 5 cards from their deck to create their hand. If the draw deck is depleted during the process of drawing cards, shuffle the player’s discard deck to create a new draw deck.

‘Tis the season to go raiding! After looking at the cards in the player’s hand, the player secretly places their clip on 1 of the 7 possible actions on their Character shield.

What a player selects is further enhanced by the cards they have in their hand.

The players reveal their Character shields and take the action indicated.

End of Round Phase

The Last and Final Raid

The game continues until 1 player collects a total of 5 or more Raid cards. The round ends as normal. All players now count the number of Legend points earned by inspecting the cards they have acquired. The player with the most Legend points wins the game.

A number of game variants are provided that can help the player tailor the game. These are summarized here.

Collect 3 Raid cards instead of 5.

Play until all the Raid cards have been claimed.

Depending on the number of players, the game can be played as a 2-player head-to-head game or as a team game, where groups work together to claim Raid cards.

Play as a team against the game! England and France march against the players and threaten their way of Viking life.

The Child Geeks jumped right in and took control. None of our available Child Geek players were unfamiliar with deck building games and the easy rules of the game made it a quick game to learn. According to one Child Geek, “I don’t know what the game is about, but I understand enough to know what I have to do to win.” A player need not know anything about Vikings to win the game, but a general knowledge of deck building is an absolute must. Another Child Geek said, “Easy rules and fun cards. I like that there isn’t much to keep thinking about so you can focus on what you want to do secretly with your shield.” The Child Geeks had a lot of fun deciding how they would operate in the Spring, especially when they attacked another player. When the games were over, the Child Geeks voted to approve Vikings: Raid & Conquer.

The Parent Geeks were also enthusiastic about the game, finding it easy to learn and fun to play. According to one Parent Geek, “A really easy game to learn and a fun game to build your deck with. I especially like how simple the game makes your choices without dumbing down the game.” In other words, the game has streamlined the choices the player needs to make without making those choices obvious. A player still has to think through their goals and build their deck accordingly. Another Parent Geek said, “I think this is a great example of a learner’s deck building game. It makes it simple and fun, but still keeps everything challenging.” The Parent Geeks gave the game an enthusiastic “hell yes”.

The Gamer Geeks focused in on the game’s mechanics, knowing full well that the game’s theme could be thrown to the side. According to one Gamer Geek, “The theme on this game is just pasted on. I think it’s more important to focus in on the game itself when we consider if it gets our approval or not.” What the Gamer Geeks found was a game that was well designed, but was purposely left light. As one Gamer Geek put it, “A game with promise, but ultimately fails to impress. It feels like it’s stuck on training wheels and that really makes the entire game playing experience feel like it’s dragging.” But not all the Gamer Geeks felt that way. According to one Gamer Geek, “The game play is simple, but not simplistic. Players have a great deal to consider and to act upon. I rather like it, finding it to be a game meant for beginners or for lighter game play.” The end result was a mixed level of approval from the gaming elitists.

To be clear, one need not have watched or even be familiar with the television show the game is based off of. But it might help. Only in the sense of theme and narrative, however. The game itself does not even require a player be familiar with what a Viking is, let alone what they do for a living.

As deck building games go, this is a pretty simple one. The number of cards and types are not abundant, which makes it easy to quickly learn what is available. Players will be tailoring their decks with less guess-work after every game until they have seen all the cards. It only took 4 games for me to understand everything that was available. By the time I was finishing up game 6, I had created the exact deck I wanted (heavy on the Influence).

The breakdown between Influence and Power is a clever one and an easy juxtaposition to understand. Players who favor Power will go on raids and claim raid cards, but not necessarily win the prize. They put themselves in danger and aggressive players often draw attention to themselves. On the other hand, the player who favors Influence is playing the political game and favors the long-term goals through safe raids rather than risky ventures. It’s an interesting mix of “safe versus sorry” or, better put, “risk versus reward”.

Games based on shows are oftentimes a great deal more disappointing than they are entertaining. In this case, Vikings: Raid & Conquer is a good example of a well designed deck building game. It won’t be of much interest to serious and veteran players, but new and inexperienced gamers will have a lot of fun with it. Give it a try if you think it’s worth raiding.