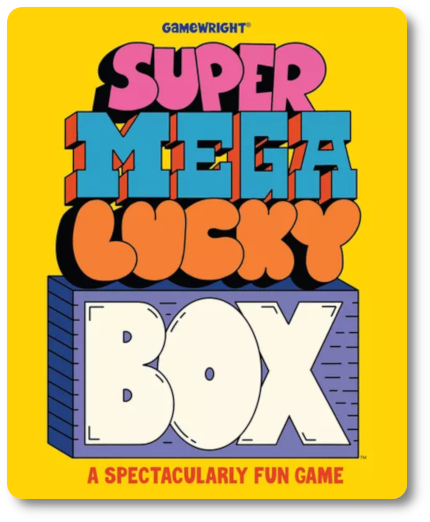 American astrophysicist, cosmologist, and winner of the Nobel Prize in Physics laureate John C. Mather said: “There is strength in numbers, but organizing those numbers is one of the great challenges.” In this game, players will be tasked to complete cards by crossing out random numbers. But look deeper, and you see that between the known and the unknown, the moment when there is limited and unlimited potential, there is a great deal of apprehension and excitement. It can be addictive. Randomness and luck might be everywhere, but we can infer a great deal by simply observing and making smart choices. And that’s the game.

Getting Ready to Play

Second, place the Lightning and Moon tokens off to one side in separate piles to create the token supply.

Third, shuffle the Number cards and deal nine face-down. Place the remaining Number cards off to one side. You won’t need them right now, but you’ll be coming back to them each round. Don’t look at these cards! 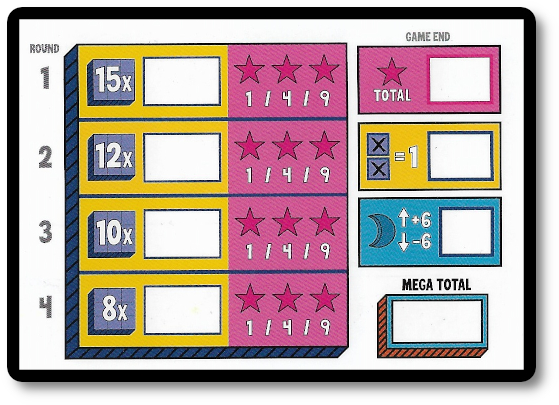 That’s it for game setup. Time to get lucky!

Super Mega Lucky Box is played in four rounds. Each round has nine turns that are played simultaneously among all the players. A game round and its action steps are summarized here.

One player draws and reveals the top-most Number card and announces the number value, placing it face-up next to the Number draw deck and next to any previously drawn Number cards.

Action Two: Check Your Lucky Box Card or Use Lightning 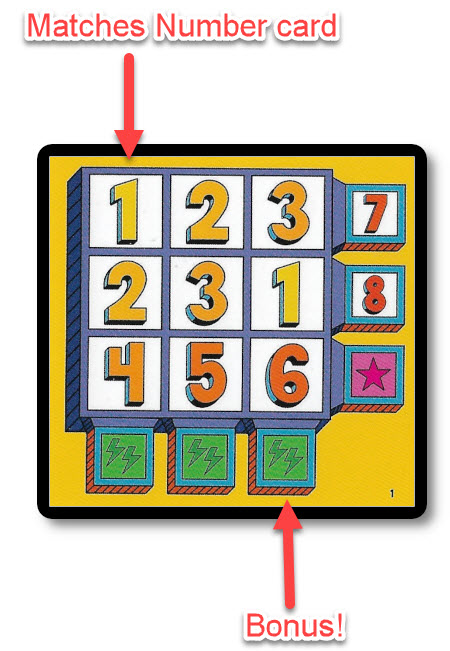 Optionally, if the player does not have the number, they may spend one or more Lightning tokens to increase or decrease the revealed number value by one, but only for them. For example, if the drawn number value on the Number card is a “5”, a player could spend two Lightning tokens to make the number a “7” or a “3”. Then, the player announces what they are doing, returns the Lightning tokens to the supply, and marks off the number. All numbers “loop,” meaning they start at “1” and end at “9” but then return right back to “1”. Confused? Don’t be. If, for example, I needed a “1” and a “9” was revealed, I could spend one Lightening token to change the “9” to a “1”…. or an “8”, depending on what I needed.

When marking off a number during this action step, only use the numbers in the large boxes.

If a player completely crosses off all the numbers in the large boxes to fill a row or a column on their Lucky Box card, they get a bonus. The player now circles the smaller boxes at the end of the rows and columns. Bonuses include the following:

It’s possible to complete a row and a column at the same time. If this happens, the player gets to apply the bonuses for each, but the order in which they are resolved is up to the player.

After completing actions steps one through three, the next Number card is revealed. Continue until all of the Number cards are resolved.

After the ninth and final Number card is revealed and all players resolve their Lucky Box cards, everyone takes a moment to review what has been completed and updates their Scorecard.

Action Six: Reset and Clean Up

One player now deals three new Lucky Box cards to each player. Players choose one to keep and place the other two in the discard pile. There is no limit to the number of Lucky Box cards a player may play during the game.

Collect all the number cards, including those not used during the round, and shuffle them together. Next, draw nine Number cards, place them face-down in a pile, and set the remaining off to one side.

Action Nine: Start the Next Round

The next round now begins by revealing the top-most Number card.

The game ends after the fourth and final round is completed. All players now determine their final score.

Super Mega Lucky Box can be played solo. Score as normal, but there is a change in the final scoring using the Moon tokens. The number of collected Moon tokens is compared to a table in the rules that define how “lucky” the player is.

One copy of the game can comfortably sit up to six players. If you combine two copies of the game, you can play it with 12 of your friends!

The Child Geeks really enjoyed themselves, finding each round to be engaging and entertaining. According to one Child Geek, “I like it because you can work on as many cards as you like. It always feels good to cross out a number.” Another Child Geek reported, “I liked the game because I could do it myself, and I liked how I could make a lot of points by picking the right numbers or using my lightning bolt spell to change the numbers like Harry Potter.” From young Child Geek to old, this group liked the game and wanted to play it again as soon as it was over. More than once, it was mentioned how much they enjoyed writing on the game components, which made some of the Parent Geeks wince. Regardless, when the last “lightning bolt spell” was cast, the Child Geeks found Super Mega Lucky Box to be enchanting.

The Parent Geeks also enjoyed it, finding it to be a casual and relaxing game. According to one Parent Geek, “It reminds me of Bingo back in the day when we could all go out at night and be social. It certainly has that feel of being light and effortless. But you also have to think about what you want to mark off since you can only mark off one number. I liked that because it forced me to consider all my possibilities. And by force, I mean engage.” Another Parent Geek said, “I really enjoyed it with the family. Everyone understood the rules, and everyone was able to play on their own. We actually had real competition at our table, which is not something we get often. I highly recommend this game.” When the last card was marked, and points scored, the Parent Geeks gave Super Mega Lucky Box the highest score.

The Gamer Geeks were mixed about the game. A few of the elitist players found the game to be casual and very light. Almost too light, but they also recognized that the game did require thinking and planning. They also recognized that no amount of planning could account for luck. According to one Gamer Geek, “The game is all about evaluating the current situation and then making a lot of assumptions. But since the deck of Number cards is always limited and then the numerical values of cards are always randomized, it makes the game feel more luck involved than skill. Still, I enjoyed it. I’d play it again as a filler and definitely with my family.” However, not all Gamer Geeks felt the same. According to another Gamer Geek, “The game is completely luck-based, and the only thinking you have to do is which number – if you are lucky enough to have it – to mark off. You will always want to try to complete rows and columns, so which number to mark off is also a no-brainer. I think the game would be fine for families, but this is not a game for anyone who wants a game with depth, strategy, tactics, or time value.” When the votes were all in, the Gamer Geeks rejected Super Mega Lucky Box.

Light and breezy with just enough thinking and the excitement of not know what is coming makes this little game charming. It’s a game I can play with my kids without issue, a game I can play with adults without effort, and I can play the game with both groups, regardless of age or experience, without concern. This makes the game a winner. It keeps everyone at the table engaged and motivated.

Unless you are elitist, I suppose. Unfortunately, Super Mega Lucky Box lacks the grit to hook and keep the attention of the Gamer Geeks. There is just not enough “game” in the “game.” That, however, only means Super Mega Lucky Box wasn’t intended for this crowd, which is perfectly fine.

I enjoyed the game and look forward to playing it with friends and family in the future. It would also work great for when we can all go to gaming conventions again. Small enough to put in your bag and big enough to keep a group happily occupied while you wait for your pizza, beer, friends, or next game to start. Do try Super Mega Lucky Box with you and yours when time allows. You don’t need to be lucky to enjoy it.