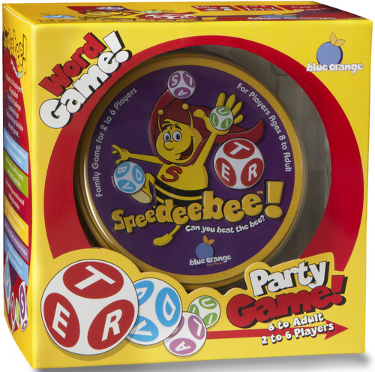 Challenge your mind and your vocabulary as you quickly attempt to match random letters with random challenges! Speed of thought and tongue will win the day, but don’t mess up! One mistake or suffering from analysis paralysis can quickly cost you points. In this fast paced game, every turn counts and will keep you on your toes and your mind racing.

Speedeebee, by Blue Orange Games, is comprised of  4 six-sided dice that have letters instead of colors and 50 Challenge cards with 3 different challenges described on each card. Speedeebee is part of Blue Orange Games’ pocket line, which means the entire game fits in a small tin can. This makes the game highly portable and easy to bring with you to just about anywhere you would want to go and play games. 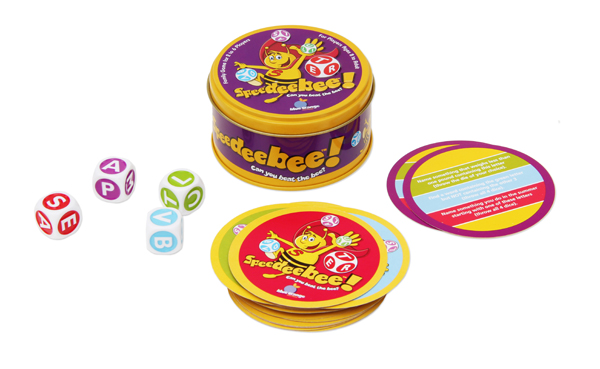 What you get in the game

There are two ways to play Speedeebee. The first is Challenge and the other is Freestyle.

To set up the game, take and shuffle the deck of Challenge cards thoroughly. Deal , face-down, 20 Challenge cards and place in the center of the playing area. This is referred to as the draw deck. The remaining Challenge cards are placed back in the tin and are not used for the duration of the game. Hand the 4 six-sided dice to the first player and begin.

As quickly as possible, all players (including the player whose turn it is) attempt to complete the challenge using the results of the rolled dice. The first player to do so, collects the Challenge card and places it in front of them, face-down. This is the player’s score pile. 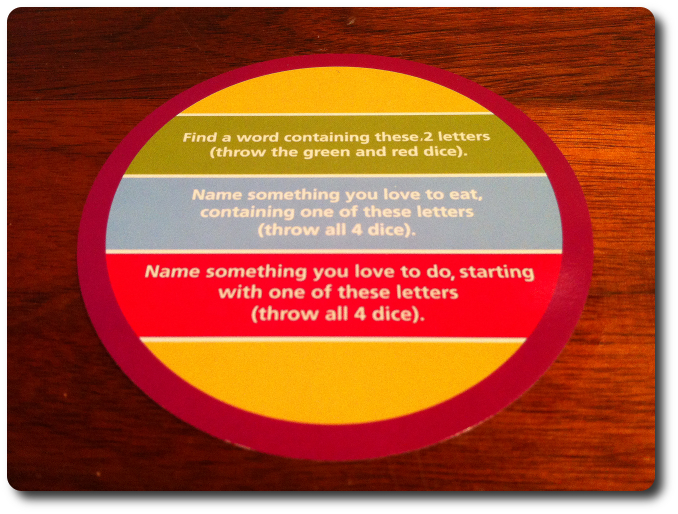 Example of one of the many Challenge cards in the game

It is very possible, while in the heat of the moment, a player could blurt out an incorrect answer. Incorrect answers penalize the player by making them discard one card from their score pile. These cards are placed to the side and are out for the duration of the game.

The dice are then re-rolled and everyone attempts to answer the same challenge again.

If none of the players can answer the challenge within 30 seconds, re-roll the dice and continue the game, but do not change the challenge requirements.

To learn more about Speedeebee, see the game’s web page.

I think this game will appeal most to the Child Geeks and the Parent Geeks. I doubt very much the Gamer Geeks will want another game after they’ve had a taste. There simply isn’t enough here to really get them excited when we consider the usual games a Gamer Geek actively looks to get to their table. There is also a sweet spot here for the game when it comes to geek skill levels. A Child Geek will have a significant disadvantage against a Parent Geek, for example. For that reason, I can only assume that the game will be well excepted among those players who get to participate in a game with their peers (Child Geeks vs. Child Geeks, for example).

After explaining the game to my little geeks, demonstrating how to successfully complete a challenge, and answering any questions they had, we were ready to play the game. The level of ability between my 8 and 5-year-old is measurable when it comes to their vocabulary, reading, and spelling. Despite that, they both have very quick minds, being equally matched in wit and mental speed. The only area where my 5-year-old will need help is the reading of the Challenge cards, but anyone can read these cards out loud without upsetting the game’s natural balance. As we set up the game, I asked my little geeks their thoughts on it so far.

“An easy game of finding words. Should be fast and fun, but I don’t think Nyhus will win.” ~ Liam (age 8)

Super. Looks like my two little geeks are ready to fight it out over the game table making a friendly game with the family into something of a skirmish. Let’s see if the game can cool their tempers and challenge their minds or if they would be more challenged by simply heckling each other.

Both of my little geeks played the game very well, but the stronger player was my 8-year-old. While my 5-year-old could work out some of the challenges, he did not demonstrate a consistent level of improvement or a high enough level of competitive game play to warrant a reduction in the publisher’s recommended age minimum. The only skills my 5-year-old lacked were spelling and vocabulary related, but both of these will come in time. Not being able to read the Challenge cards did not limit his ability to play. My 8-year-old had no problems with the game and was fast enough to snatch points away from me.

Parent Geeks had a great time with the game. It is very casual but engaging, fast but never heavy or demanding. The non-gamers really enjoyed it and the table talk and banter (be it supportive, congratulatory, or flat-out sarcastic) was abundant. With 150 challenges and the ability to play the game using your challenges, none of the playing sessions we had with our Parent Geek test groups ever felt boring. Among their peer group, the Parent Geeks had a wonderful time and when they played it with their family, their level of enjoyment doubled. For Parent Geeks with little geeks who were 8-years-old and above, the games were competitive and fast. For Parent Geeks with little geeks who were younger than 8-years-old, that games were slower and took on a more educational and rewarding experience.

Gamer Geeks, as expected, played the game and declined to play it again. 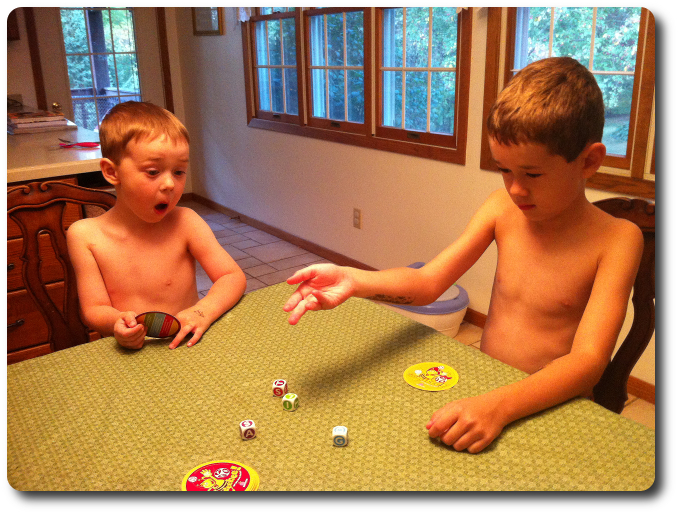 As his brother rolls the dice, my 5-year-old starts to blurt out the answer to the challenge!

Gamer Geeks, this is a game that lacks depth, strategy, and tactics, meaning it will not appeal to you. We do think you’ll have fun playing with the Parent and Child Geek crowds, however, and we have no doubt that even the non-gamers will be happy to sit down with you to play a game or two. But with your own peer group, we think not. At most, you’ll play this game once, acknowledge how challenging the game could be with a like-minded group of gamers, but will not be able to find a higher level of game play other than simply shouting out the correct answer first. Give it a try, but don’t expect it to be the game of the evening when next you meet with your Gamer Geek friends.

Parent Geeks, this is a fast and fun game that will challenge the player’s mental ability. Everyone plays at once and the game never slows down until the very end. With the many different challenges available in the game and the ability to create your own challenges, you can play Speedeebee with adults and with the Child Geeks with ease. Simple to explain and teach, you’ll have no problem introducing this game to non-gamers and getting them excited about the wonderful world of table top gaming.

Child Geeks, your level of ability to play this game well will be dependent on both the size of your vocabulary, your spelling, and your mental reflexes. Luckily, being less skilled in any of these three will not reduce your level of enjoyment or ability to play. If you cannot yet read, simply have an older friend or family member read the Challenge cards for you. Or, better yet, create your own challenges and demonstrate to everyone at the table how imaginative you can be. This is one of those games that you will only get better at as you get older. If you find the game too fast and confusing today, give it 6 months and we know you’ll do much better!

Speedeebee is actually very entertaining. It has a party-like feel without the need to have a party to play it. I never felt like the game over stayed its welcome, but there were several occasions where I felt the game was not a good choice for the group. The game’s level of difficulty is based on the skill of the players. If one individual is not able to compete because they are out skilled by the others, they will have a horrible time, but the game is so short none of our Child Geeks had long enough to really think about it. The game really shines when it is played with a family and with Parent Geeks within their own peer group. Seeing adults go head-to-head in a game where quickness counts and pulling random words out of the aether creates a lot of laughter. Observing families playing the game was a wonderful example of how games can not only entertaining but educate all at the same time. In both cases, the game left me impressed.

If you are looking for a fast paced game of vocabulary kung fu action where speed of thought and quickness of the tongue is the key to success, then be on the lookout for Speedeebee!