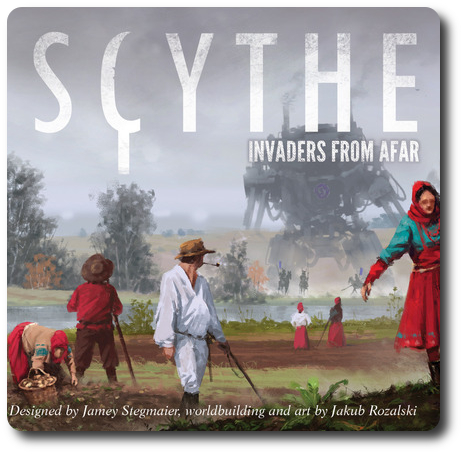 Eastern Europe is in the throes of war. Giant machines known as “Mechs” roam the land, trailed by soldiers and workers who destroy and build in equal measure. Abundance invites bloodshed which leads to desolation and new opportunities for growth. Two new factions now enter this story, both with their own special set of skills, but with the same goals. The seeds of war continue to be sewn…

Scythe: Invaders from Afar, designed by Jamey Stegmaier and published by Stonemaier Games, is comprised of 2 Player mats, 4 Automa cards, 2 plastic bags (for the “stuff”), 2 Faction mats, 2 Action tokens, 2 Popularity tokens, 2 Power tokens, 12 Star tokens, 8 Structure tokens, 8 Recruit tokens, 8 Mech miniatures, 2 Character miniatures, 16 Worker meeples, 12 Technology cubes, and a small array of various cardboard tokens. The component quality is excellent, with solid mats, thick tokens, and detailed miniatures that make the game a visual joy. Best of all, the component quality of the expansion is on par with the base game, ensuring it fits seamlessly in with the rest of the details. Artist Jakub Rozalski returns and delivers even more outstanding art which furthers the game’s thematic feel.

Note: This is a game expansion. To play it, you must have the base game, Scythe.

Scythe: Invaders from Afar includes two new factions that can be played with as alternatives to the existing five that were in the base game or included to expand the number of players from a maximum of five to a total of seven. The expansion also includes two tokens that alter the original Crimea and Polonia factions that adjust one of each faction’s abilities, making them more relevant in a game of six to seven players.

In addition, there are new Automa cards that will be used to replace 4 base game cards. You only need to replace these cards if you play with anything in the expansion and going solo. A few additional movement rules and slight game play adjustments are also included for Automa play.

Note: It’s recommended that new players to the game not be given one of the following new factions to start with. Stick with the base game’s factions when teaching the game.

Two new factions have joined the battle. Each brings to the field their own special tactical and strategic moves that will empower their player to take the battle to their rivals without upsetting the game’s balance. Each new faction is summarized here.

The Togawa faction follows a strict military code that strengthens the faction’s ability to strategically and tactically evaluate their enemy and then crush them. This is perhaps best demonstrated by the faction’s ability to set traps. A Trap token is placed face-down and left there for all to see, but only the player who controls the Togawa faction knows what lies beneath. These traps act as a warning and a deterrent, but they are not a bluff. If an opponent moves into a territory where a trap awaits, it’s triggered and a penalty is immediately placed. Once the trap is triggered, it remains in the territory, but is no longer active. But, the damage is done. Opponents stand to lose not only power, but also popularity, combat strength, and even war funds.

While traps are pretty cool, it’s the Togawa’s ability to move through water that should be of real interest to a tactical and strategic player. The Togawa Mechs can cross rivers without a care in the world and even use lakes as strategic combat points, granting them additional combat bonuses. Even more interesting is the Togawa’s ability to be strong even when their numbers are weak. If an opponent makes the mistake of thinking that a territory being held by the Togawa with a single character or Mech with no supporting workers is an easy win, they are mistaken. Finally, the Togawa have mastered the art of disappearance and can instantly travel from one territory to another that both have Trap tokens. Sneaky, but even sneakier is the player’s ability to rearm traps once they travel between them.

The Togawa are one part Shogan warrior and one part mystic ninja. Combined, it offers a player a unique strategic and tactical advantage that can be used to confound and surprise their enemies.

The Albion faction are conquerors and they plant their flag in newly claimed territories. In game terms, the Flag tokens for Albion are placed in territory spaces and count as an additional territory when being scored. This means a territory space with an Albion flag is equal to two territories, but only if the player controlling Albion controls the territory space and the Flag token is not adjacent to the player’s Albion home territory. Believe me when I say this is not a restriction but a gift, as the Albion faction is all about conquering new lands and expansion. A player running the Albion faction will delight in their new-found ability to sack and suck in new lands.

Albion Mechs can burrow, making it easier to move into new lands to control. Albion forces also have the Sword ability that reduces the defender’s power by -2. Albion forces also gain a +2 to defend with their Shield ability. Even more interesting is the Albion faction’s ability to Rally, which gives the player the ability to move their forces to any territory space that has a Flag token. What this all adds up to is a significant fighting force, driven by conquest and further emboldened by their ability to get the job done. Players of Albion will be expected to roam the board and play aggressively.

And for the record, the Albion’s are Highlanders, which means it’s completely appropriate to yell “THERE CAN BE ONLY ONE!” when you engage an opponent in combat. I’m actually surprised this is not in the rules…

Fair disclosure upfront. This expansion took us longer than expected to review for two reasons. First, a six and seven player game takes a long time to finish. The estimate is about 25 minutes per player. That, times seven, means a single game can (and mostly will) take longer than two hours. Possibly even up to three hours. Not terrible from a Gamer Geek’s perspective, but that is painful for the Child Geeks and somewhat too long for the Parent Geeks. As such, we were not able to complete a few of our games in a single session. No problems with the Gamer Geeks, but the Child and Parent Geeks were proving difficult.

Second, Scythe is not a game that is played a lot by our groups. Not because it’s disliked. On the contrary, it’s very much enjoyed. It’s a game, however, we were not asked to review and as such, was not widely distributed. We only had two copies of the base game and one copy of the expansion to support seven different groups. In addition to teaching the game to new players, we had to manage the game components pretty closely.

Yes, yes. Boo-hoo and all that… Get on with the review, Cyrus… Just thought you would like a quick look at the exciting world of a game reviewer.

Scythe: Invaders from Afar is a brilliant addition to an already brilliant game. It adds more options and flavor without upsetting the apple cart. The new factions easily slide into the game, and for experienced players, are quickly learned and leveraged.

A few interesting quotes from our players…

“The Albion are my new favorite faction. I don’t know why I would ever play with another faction ever again!” ~ Child Geek

“The game still feels well-balanced and is just as smooth as before. The new factions only directly impact the player controlling them, but all the players benefit from the new faction’s abilities and sneaky plays.” ~ Parent Geek

“The perfect expansion for an almost perfect game. I think they did a great job building onto what is already there, strengthening the core while at the same time allowing players the option to enjoy the base game fully knowing that the expansion enriches the experience they have already learned to love with the base game.” ~ Gamer Geek

Putting my geeky love affair with Scythe and Stonemaier Games aside, this is an expansion I truly enjoyed. But a word of caution. The expansion is built firmly on the base. This means you really need to understand the core game before you can enjoy the expansion. In other words, I suggest you only use the expansion after you have a few sessions of the base game under your belt. You’ll be much better off and enjoy the Togawa and Albion all the more for taking the time. And the reason is simple. The designer took a sharp look at what the base game already provides and somehow found gaps in what I would consider to be a pretty tight game. The new factions fit into those gaps so neatly it’s very possible that the designer had them in mind when they game was still being created. However, each faction builds upon the originals. Learning all about the base game’s factions makes it a lot easier to use the expansion factions.

If you enjoy Scythe, I think the expansion is a no brainer. I do not suggest, however, you go find all your friends and jump on a seven-player game. For the elitists, it’s a good idea, but for everyone else (who makes up the majority), the expansion should be used to replace existing factions. Give the players more choices and the game play will be all the better for it. This is what we did and all of our players walked away from the gaming table happy. Do look into this expansion when time allows. It’s a winner.