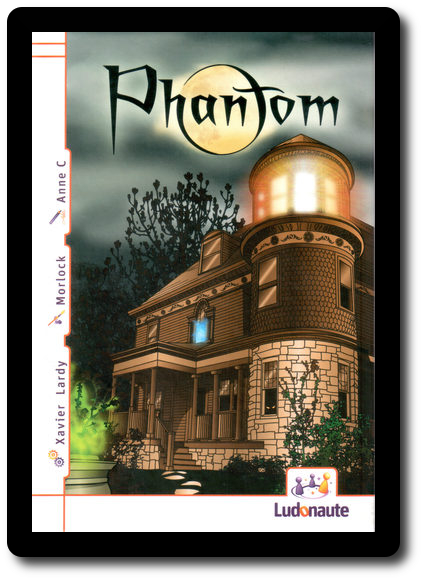 Two powerful and angry spirits dwell in the old mansion. One is said to be the spirit of a great Indian Chief and the other an English settler. They killed each other, or so one story goes, and their spirits are still at war. Each phantom gathers to them ghosts and specters to control different areas of the house. Now a family has purchased the home and looks to move in. The have unwittingly walked into a supernatural war zone.

Phantom, designed by Xavier Lardy and published by Ludonaute, is comprised of 32 Phantom cards, 26 Place cards, 8 Character cards, 4 Zone cards, and 2 Reference cards. The cards are as thick and as durable as your standard playing card. The illustrations by Morlock are outstanding, capturing the eerie theme of the game and strengthening the underlying narrative.

Second, set up the house to be haunted by placing the Zone cards in a row between the 2 players. They need to be in the following order, from the first player’s left to right: “Garden”, “Basement”, “Ground Floor”, and “Upstairs”.

Fifth, shuffle the Phantom cards and place the deck next to the Place deck, face-down, leaving room for a discard pile.

That’s it for game set up. The player who elected to be the ghost of the Indian Chief goes first.

Bumps and Screams in the Night

Phantom is played in turns with no set number of turns per game. A player’s turn is comprised of 4 Activations, one per Zone card in play. The order in which the Zone cards are activated is up to the player. Each Zone card has step-by-step instructions that must be followed. A player can also optionally play a card from their hand. Each of the step-by-step actions per Zone card are summarized here. 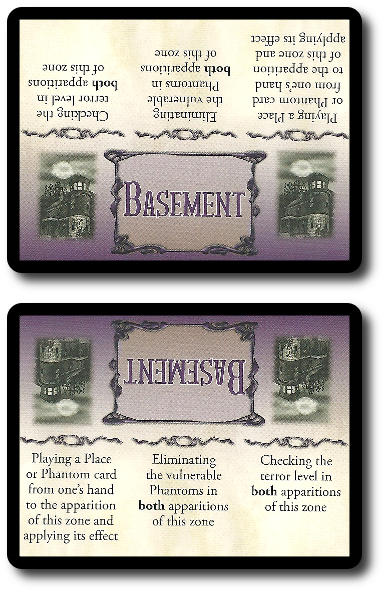 The player has two cards they can play.

Place cards represent the different locations in the house. They are always attached to a Zone card and only to the Zone card currently being Activated. Each Place card lists which Zone it can be attached to, as well. As soon as a Place card in played, it creates an Apparition. Apparitions are either Places or Phantoms and represent specific areas of supernatural activity and power. 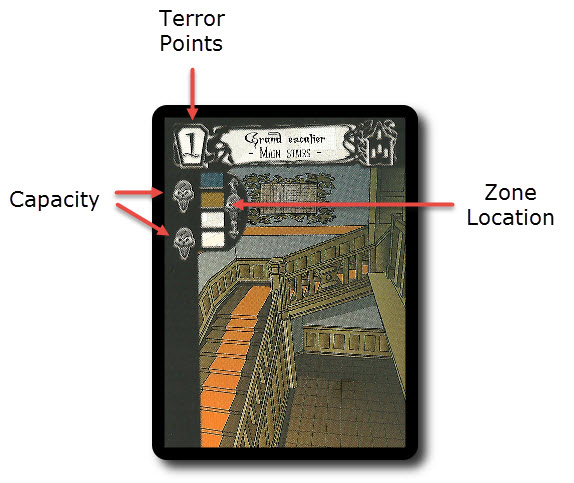 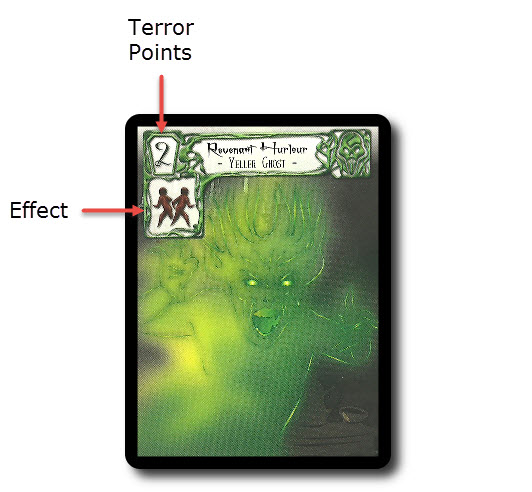 In total, there are 4 different groups of ghosts and specters (Specters, Ghosts, Shadows, and Souls – consider them like a card’s suit). There are 6 different types of Phantoms the players can control. Once played, Phantoms trigger an effect. Each effect is summarized here and on the Reference card.

After playing a card, the player now determines if any of the Phantoms are destroyed. Several of the Character cards are adults. The adult Character cards have special abilities that allow them to banish 1 group of Phantoms that are located in the same Zone as they are, but only if the Zone is currently active. There are Place cards that protect specific Phantom groups, as well. If the Character card banishes the Phantom group the Place card protects, the two powers cancel each other out. Otherwise, all the Phantom cards that match the same group the Character card banishes are taken from both the player’s side and their opponent’s side that are currently located in the active Zone and then discarded. The active player goes first, followed by the opponent. The Phantom cards are discarded in the order in which they were played. 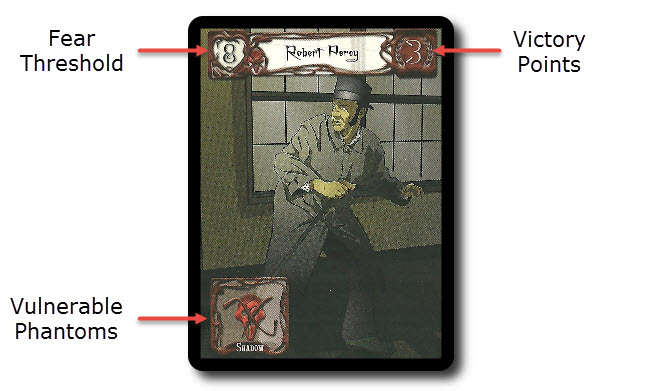 After the points are all added together, the player determines if they have terrified the Character card located at the active Zone. A Character is terrified if the following conditions are met:

If the Character card is not scared, it remains where it is.

If the Character card is scared, it’s removed and given to the player. This Character card will be worth victory points at the end of the game. Then all the Place and Phantom cards are discarded from the active Zone, resulting in the Zone card being empty on the player’s side. The player’s opponent does not remove their cards.

This ends the player’s turn. The player now draws cards from the Place or the Phantom deck until they have a total of 5 cards in their hand.

The next payer in turn order sequence now goes.

Introducing the Exorcist and Ending the Game 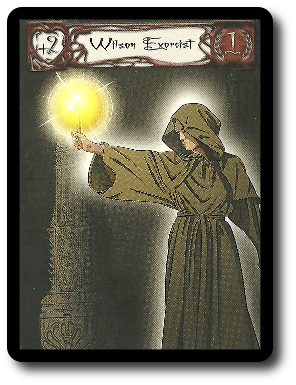 The game ends when one player has collected 11 or more points from Character cards. The game can also end if there are no more cards to be drawn from the discard pile or the draw piles. The player with the most victory points wins the game.

To learn more about Phantom, visit the game’s web page.

The Child Geeks were excited about the game’s concept and really enjoyed the cards. The game play itself somewhat disappointed them. According to one Child Geek, “I understand how to play the game just fine, but I don’t feel like I’m a ghost or I’m leading ghosts.” Another Child Geek said, “What I like the most about the game is moving Phantoms around and forcing Characters to move, but wow, is that hard to do when you have an opponent who is always messing things up.” None of the Child Geeks we played with had problems learning how to play the game and demonstrated good game play. What the majority of them didn’t like was how long the game took to get interesting. As one Child Geek put it, “I like the idea of the game, but not playing the game.” The majority of Child Geeks voted to not approve Phantom, finding it to be a game they understood how to play, but not a game they wanted to play. 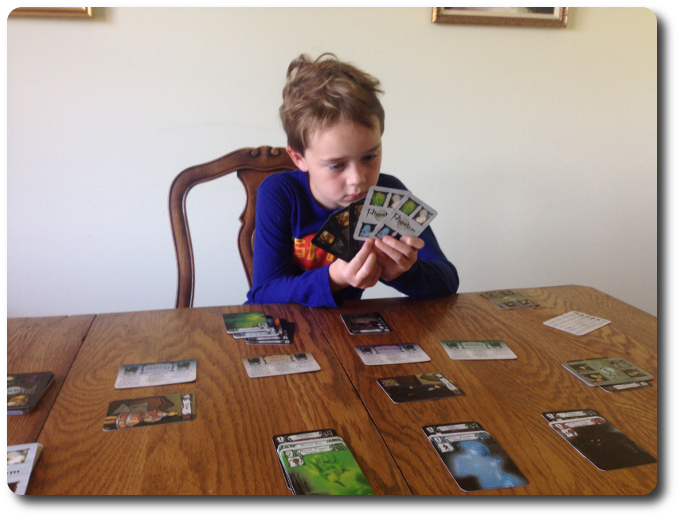 The Gamer Geeks really enjoyed the game’s illustrations and the games concept, but were torn when it came to liking the game. According to one Gamer Geek, “The game certainly has it all, but is missing something. It needs to be tightened up and refined. Players can neutralize their opponent again and again resulting in a stalemate.” Another Gamer Geek said, “The game has too much back and forth. It starts to feel like I’m trading punches versus making any real headway.” And another Gamer Geek said, “The scariest part of this game is realizing you have no idea how to intelligently meet the game’s objective, even after you’ve been told how to play and understand the game. Man, this is a frustrating game.” But the negative sentiments were not shared by all. One supportive Gamer Geek said, “This is a game that requires players to think though their plays, expect set backs, and work through them. The goal is not to be all powerful. The goal is to be just powerful enough to take advantage of the game and your opponent’s mistakes.” Another Gamer Geek said, “This is a game built on the foundation of patience and strategy. You win this game by being smarter than your opponent and recognizing opportunities.” When all the votes were in, the Gamer Geeks were as undecided as the Parent Geeks, giving Phantom mixed approval.

This is a hard game to pin down. It presents itself as a game full of haunts and horrors, where players will be terrorizing the occupants of the home using a ghost army. But that isn’t what the game is about. It’s more of a tug-a-war between players with the Character and Phantom cards in the middle. Each turn is filled with stacking Zones with more and more Phantoms, moving Phantoms, and occasionally bring out other Characters. The end result is a game where the players spend the majority of their time stuffing ghosts into locations, but more times than not playing themselves into a corner, too.

Which is not to say that this isn’t an interesting game. Players have to think about what they want to accomplish on their turn and activate the Zone cards in the order they think will shift the game in their favor. The first couple of hands will be nothing more than the players getting situated and marking their territory. After that, it’s a blitz of card moving and shuffling. I found the game far more chaotic than I expected, which many of our players disliked. But the chaos is part of the game and an aspect of game play that cannot be controlled. Players must direct it, channel it, and then use it the best they can.

The real trick to this game is not how much you have and where, but how quickly you can move when and where you need it. This is a game of hidden tactics and surprise sabotages. The game’s theme is lost in the scuffle, unfortunately, but the end result is a game that awards those who quietly wait for their opportunity to strike and take full advantage of an opponent’s mistakes. Much like how one would hide in a closet and jump out at unsuspecting victims, terrorizing them in the process.

If you are looking for a 2-player game where managing a hand of cards is as equally as important as managing your opponent’s, where long-term goals are obtained through small advancements, and controlling the game is as much about what you reveal versus what you hide, then do play a game or two of Phantom. What it lacks in terror it makes up for in critical thinking.