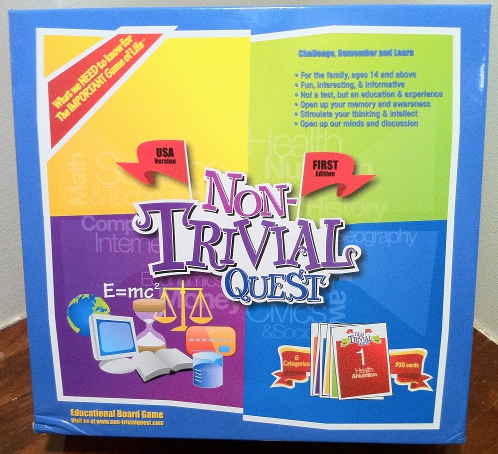 In Non-Trivial Quest, the players are tasked with a very simple objective: answer the questions correctly. While this is to be expected from any trivia game, what makes it unique is that the game was specifically designed to focus non-trivial questions. To put it another way, questions that are meaningful and relevant to the player and to the hear and now. It’s a trivia game that does more than challenge your thinking. It also reinforces postive life lessons and helps the players understand the world around them, and maybe even their place in it. If ever there was a game that teaches as well as entertains, this is it.

The game is comprised of a sturdy colorful game board, six category decks, two six-sided die, and eight player pawns. All the game component are of a good quality, meaning many hours of play without fear of damaging the game are possible. The text on the category cards is bold and crisp, making squinting to read the small print unnecessary. The dice and the game pawns are meant to be functional; the pawns are plastic and the dice are just your standard, run of the mill six-sided affair. Whatever it lacks in “pop” is makes up for in completeness. The box has a built in card tray making game play much more efficient and the clean up quick.

Game set up will take you only a couple of minutes since the game stores very nicely, making set up and clean up a snap. Simply remove the game board and place it in the center of the table. Shuffle the six catagory decks and place them in the built in card tray. Lastly, pass each player a pawn and place the pawns on the a starting position (one for each player). You are now ready to play. Pass the dice to the first player and begin. 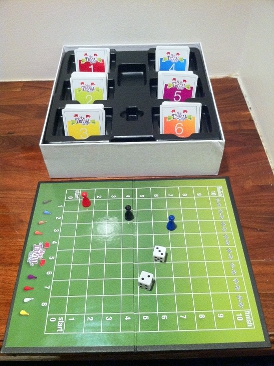 The game is small but packs a cerebral punch!

On a player’s turn, they roll the two six-sided dice. If the dice values match, the player simply rolls again and continues to do so until the dice show two different values. Each of the category decks has a number on them and the player must choose one of the six categories that matches one of their dice values rolled. Since the player has two different values, the player does have a choice, albeit still determined randomly. This ensures that a player can always choose the stronger of the two available categories.

The available categories are as follows:

The person who previously went before the active player is always the question giver. This individual randomly selects one of the category cards selected by the active player and reads the question out loud. The questions are multiple choice and the available answers are also read. The active player then has an unspecified amount of time to reply with what they believe to be the answer. The category card, in addition to the question and multiple choice answers, also has a brief description that goes into more detail about the correct answer. This is a nice touch as it provides the “why” and allows active players, and everyone else, an opportunity to learn more than just the what the right answer is. It can also start some interesting debates.

The winner of the game is the first player to have their pawn cross the finish line on the game board.

I predict this game will not peak my little geeks interests. The trivia aspect of the game will only keep them focused for so long. I plan to play this in teams, one child per adult. I have no doubt my little geeks will be lost in regards to most of the questions (the original game’s questions are clearly for older kids and adults), but there are important facts to be learned. And what more entertaining way to learn than through play and cooperation?

Non-Trivial Quest is an excellent game for educators and for families with older kids. Sadly, my little geeks just aren’t there yet and were at a severe disadvantage when it game to the general knowledge questions being asked. Now, if the categories were about Power Rangers, Ninjas, Transformers, Zombies, and Hellboy, I am absolutely certain my little geeks would have given their mom and dad a serious run for their money.

Like all triva games, Non-Trivial Quest will suffer if the players are not (1) in the mood to be challenged and (2) do not know a great deal of what is being asked, subject matter wise. This is especially true with younger players with this game. Most of the questions are what I would consider difficult, but not impossible, for a ten year old. For younger children, you should expect a lot of blank stares.

Where Non-Trivial Quest really shines is the simple game mechanics used to quickly move the game forward and, of course, the questions. With the understanding that what is or what is not “trivial” should be left entirely to a person’s perspective, the available categories in the game do cover a wide range of questions that anyone would benefit from knowing the answer to. This is a refreshing change as most trivia games I have played require me to spew forth worthless knowledge from the deepest recesses of my brain in a vain (and desperate) hope of formulating a somewhat clear answer. At any given time, I couldn’t tell you who won the 1967 World Series, what the name of Shawn Penn’s dog was, or why anyone would care to remember how many Munchkins were in the Lollipop Guild (there were three, by the way…I had to look it up).

The questions in Non-Trivial Quest, I would argue, are actually pretty good facts to know. True, the situations were such knowledge would be useful on any given day are vague (unless you are MacGyver), but from an academic standpoint, the question are spot on. This is why I highly recommend the game to educators. Not only are the questions very well grounded in an academic sense, but they can also be used to spark deeper discussions and debates on whether the correct answer is the “right” answer. For example, questions in regards to the separation of church and state. Discuss…

It is always refreshing to find a game that not only entertains and challenges, but also educates at the same time. This game might very well make you feel like a big dummy, too, but you can blame that on your parents and MTV. With any luck, the game designer will include categories a bit more “little geek” friendly in the future, which will make this game go from “good” to “awesome”.