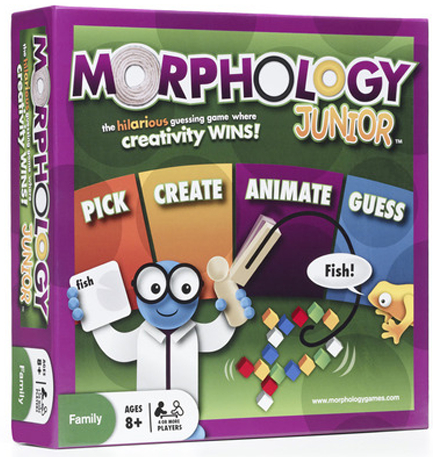 Morphology Junior is the result of countless hours of game play and feedback from the many families who enjoyed the original game, Morphology. After carefully sorting through the comments, the game designers crafted a new game that offered the same level fun and excitement as the original, but with the younger little geeks in mind. The most important update to this game is the removal of some of the rules of play that caused the youngest little geeks to be more frustrated than challenged. By doing so, they have made the game more accessible without dumbing it down.

Morphology Junior, by Morphology Games, is comprised of 1 game board, 6 wooden blocks, 2 black rubber circles, 12 glass beads, 18 cubes, 4 wooden meeples, 1 string, 1 piece of green felt, 1 sand-timer, 4 frog pawns (in 4 different colors), 1 six-sided die, and 238 word cards. Like the original game, all the components are of high quality, durable, and nothing more than a seemingly odd collection of bits. Until you play the game, that is. 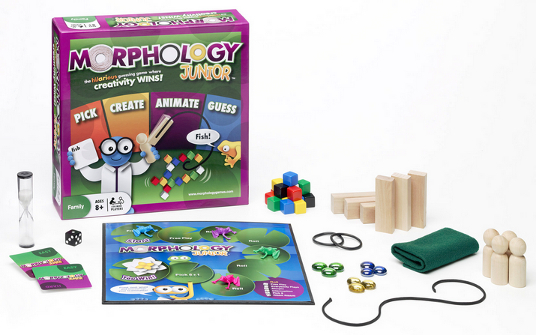 To set up the game, first place all the game bits in the center of the playing area and within easy reach of all the players.

Second, place the game board to one side and shuffle the word cards, placing them next to the game board, face-down. Feel free to break the deck into smaller stacks.

Third, divide up the players into even teams (fewer teams is better, but no more than 4) and have each team select one frog pawn. The frog pawns are placed on the starting lily pad space.

Fourth, decide who will go first and begin!

The game is played in rounds, with each team taking a turn in that round, selecting a new Morphologist each turn. A Morphologist is the title given to the player who will be attempting to create clues to help their team guess the word on the card using the game bits. On each team’s very first turn, they must successfully guess a word using the Free Play rules. The different rules of play are summarized here.

On a team’s turn, a Morphologist is selected and the six-sided die is rolled to randomly determine the rule of play (unless otherwise stated by the current lily pad). Once the rule of play is determined, the Morphologist will randomly select a word card, read it to themselves, and collect any bits that are necessary. Then, the Morphologist will read the word clue on the card. For example, the word “Airplane” has the word clue “In the sky” included on the card. Once read out-loud to the players, the sand-timer is turned over.

If the team successfully guesses the word before the sand-timer runs out, they move their frog pawn forward to the next lily pad. If not, the frog remains. Either way, the team’s turn is now over and the word card is discarded.

The six-sided die is then passed to the next team, going clockwise.

The first team to make it to the final lily pad (labeled with a big “YOU WIN!”) wins the game, as the large label suggests.

This game includes a few new Morphologists rules of play and removed a few of the more challenging ones, which should make it easier for the little geeks to play as the Morphologist. However, each Morphologist is still required to read the word cards. Unless the rule of play for the turn suggests that all the teams can guess, then this problem is easily solved by one of the opponent team members reading the word card for the little geek. If all the teams are actively going to try to guess the word, then one player will have to excuse themselves from the turn and read the word card to the little geek. Of course, a house rule can always be put in place that states that little geek Morphologists who cannot yet read only use a specific set of rules of play. Either way, this player requirement should not lock any player out, regardless of their reading ability.

Other than that, I don’t think the game has changed significantly enough to draw in the Gamer Geek crowd. Nor do I think the changes made for the junior edition will do anything but further strengthen the enjoyment for the Child and Parent Geeks. In other words, I predict no changes in the endorsement levels.

Teaching the game wasn’t necessary as all our players were already familiar with the game. Even if they weren’t, the game wouldn’t take long to teach to new players. The only specific area that should require much attention is the different Morphologist rules of play. While none of them are overly confusing, it is important that all the players understand what they can and cannot do on their turn.

And so, as I set up the game for my family to play, I asked my little geeks their thoughts on the game so far.

“I like how they have added new ways for us to create the words, but I don’t think it’s any easier.” ~ Liam (age 8)

“So this is a game that looks like the other game, but is a different game, Daddy? I’m confused.” ~ Nyhus (age 5)

Looks like the little geeks are ready to go! I really doubt there will be any confusion, but I can’t help but laugh at my little geek’s question about the game and its startling similarities to the original game. Kids say the funnies things. Let’s see if this version is as much fun as the last or is nothing more than a sad attempt to appease the masses.

After playing a number of games, it is clear that there were no shifts in the original endorsements. All the Child Geeks and Parent Geeks loved the game, and none of the Gamer Geeks did unless they were playing with the Child and Parent Geeks. But even then, it was somewhat forced and was obvious that the Gamer Geeks were out of their element. But being Gamer Geeks, they played to the best of their ability to help their team win. The end result was a number of game play sessions that reinforced what we already knew. Morphology Junior is a family game, through and through. 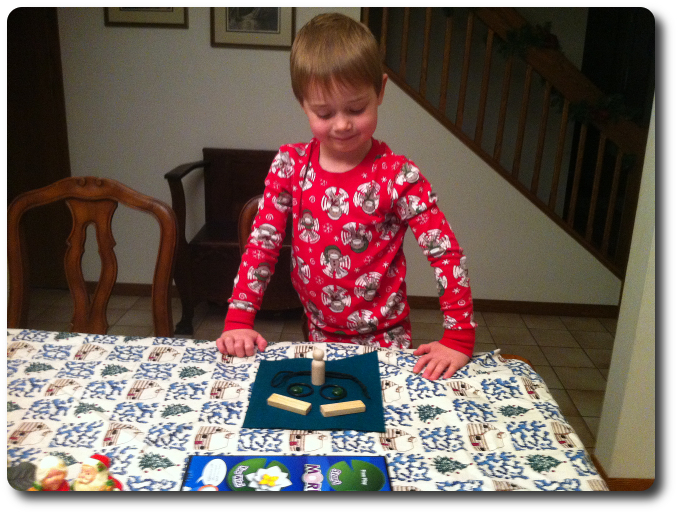 Gamer Geeks, there is still nothing for you here to enjoy unless you are playing this game at a party with a bunch of other players who are decidedly not Gamer Geeks. This is a family game, and as a result, lacks much in the way of in-depth game play. It does require a lot of imagination, however, especially by the Morphologist, but the game play is made even easier with the new rules allowing Child Geeks an easier time at the table. Sorry, Gamer Geeks, once again this game is not meant for your peer group.

Parent Geeks, this new edition is less challenging than the original, but not any less fun. The game play is simpler without reducing the level of imagination and communication needed to play. All the Parent Geeks enjoyed it and thought it was an excellent new version to a game that was already well-loved. As pointed out by one Parent Geek, however, the junior edition is not worthwhile if you already have the original version.

Child Geeks, this game is even faster than the original, has reduced a number of game rules that might have frustrated you, and given you the ability to be even more imaginative and creative than before! If you enjoyed the original version of this game, there is no doubt in my mind you’ll like this version that was specifically made for you. You won’t feel the game is dumbed down or strictly “for kids”, either. There’s still a lot to do and much to be challenged by. What this game gives you that the other did not was more creative freedom and a chance to really shine, showing off your talents and skills.

Morphology Junior is a great edition, but I think an unnecessary one. While I appreciate what the game is doing, I think it something of a shame that a whole new game had to be released to support a younger crowd. What the game provides could be easily done with just printing off a new list or rules that replace the original 6 Morphology rules of play. That would have costed a lot less money to make, but wouldn’t bring any new money in, of course. What we are left with is a new version of the same game that does little more than make changes to address a slight level of difficulty. A difficulty, I for one, didn’t mind or think was impossible. Nor did our little geeks who played the original game. For those who loved the original game, they continued to do so with the new version. For those who didn’t, well….

If you enjoyed Morphology and are looking for a version of the game that is more accessible to the younger geeks or changes the rules for the Morphologist to allow them to be more “social” in their creative building (by using rules from Charades and making sounds), then do take a look at Morphology Junior. We think that both versions are a lot of fun, but only one is really necessary to fully enjoy the Morphology experience.