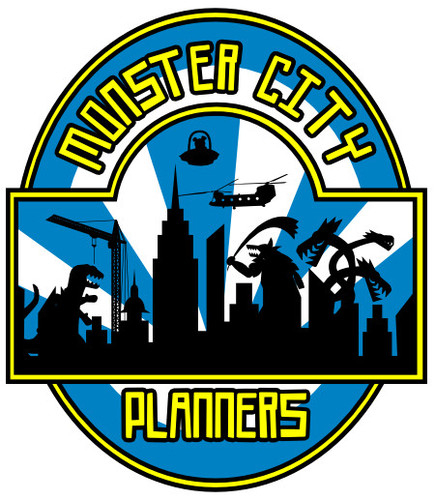 A city planner has much to consider. They must take into consideration traffic, sewer systems, and maintaining existing infrastructure. It’s a complicated balancing act where the new must fit in with the old on a tight budget. Of course, the rampaging monsters and giant robots don’t help much. But then again, a giant squid destroying a city block is a lot cheaper than hiring bulldozers.

Monster City Planners (version 1.10), designed by Gary Dahl and published by Sugar Pill Studios via the Game Crafter, is comprised 6 Factory pieces, 6 Station pieces, 6 Complex pieces, 6 Road pieces, 1 City Grid card (double-sided), 3 Pass cards, and 50 City Planner cards. Not included with the game, but necessary to play, is a pen or pencil and a piece of paper to record players’ scores. The cards are durable and as thick as your standard playing card, the pieces are made of wood and plastic, and everything fits in a very small box. It’s worth noting that this game was a finalist in the Micro Game Challenge hosted by the Game Crafter and sponsored by All Us Geeks and Father Geek.

To set up the game, first remove the City Grid and Pass cards from the deck. Shuffle the remaining cards (which should only contain the 50 City Planner cards).

Second, place the Factory, Station, Complex, and Road pieces off to one side of the game playing area. We’ll call this the “Building Pool”.

Fourth, players now look at their hand and select 1 card to keep, passing the remaining cards in the hand to the player to their left. Selected cards should be kept face-down in front of the player. This continues until every card has been kept by the players.

Fifth, place the City Planner card in the middle of the game playing area on the side you want to play on and then place the Pass cards next to it.

This completes the game set up. The player who has the most green “Cement Truck” icons in their hand goes first.

Working for the City

Monster City Planners is played in rounds with each player taking turns during the round. The game consists of 2 rounds in total. A player’s turn is summarized here and consists of 2 options.

Each City Planner card can be used one of two different ways. Players can use them as actions to work on the city or award points at the end of the round. 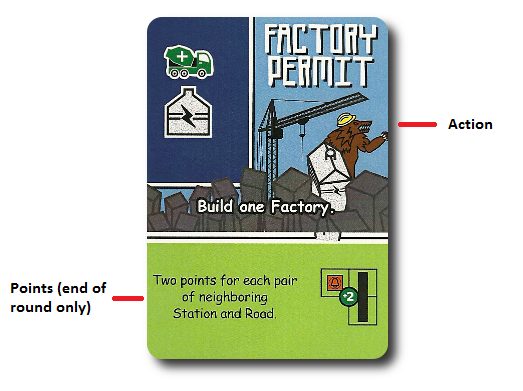 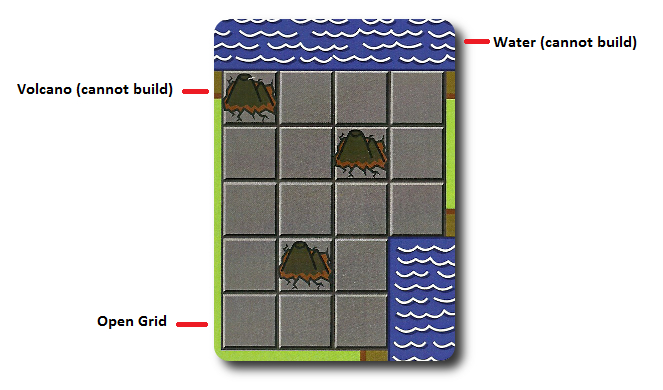 Allows a player to remove 1 or more pieces based on its piece type, location on the City Grid, or proximity to volcanoes and water. Destroyed pieces are removed from the City Grid card and placed back in the Building Pool.

Allows the player to slide the position of pieces already on the Game Grid. Pieces cannot slide into spots already occupied by other pieces, nor can they slide into volcanoes or the water.

It’s perfectly possible that the player simply doesn’t want to or cannot play a card. It’s important to note that players are never required to play a card, even if a card could successfully be played. If a player does not want to play a card, they say they are “Passing” and take 1 of the Pass cards. 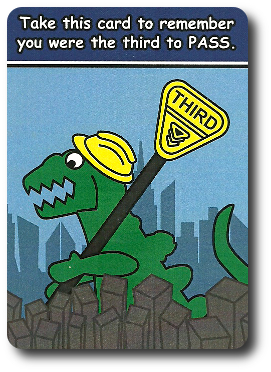 In total, there are 3 Pass cards. Each is listed as either “First Pass”, “Second Pass”, or “Third Pass”. When the first player passes, they take the “First Pass” Pass card, the second player to pass takes the “Second Pass” Pass card and so on. Pass cards are placed in front of the player and kept visible as a reminder of who has passed and how many passes have been taken. Note that players can play cards during their next turn even if they passed during their current turn. Players can also pass more than once, but they only take a Pass card once. If playing with 4-players, the last player to pass does not get a Pass card.

This completes the player’s turn. The next player in turn order sequence now goes.

End of Round Scoring

The round ends when every player has passed at least once. No more turns can be taken. Players now look at the City Planning cards they have kept in their hand to determine their score. Each City Planning card will detail a specific scoring criteria. The player counts the points earned for each City Planing card. Their total is recorded as their score for the round.

If this was the first round, the game is reset (use the set up steps above) and a second round is now played.

After the second round has been completed, all the points are counted and added together with each player’s points earned from the previous round. The player with the most points wins the game!

To learn more about Monster City Planners, visit the game’s web page on the Game Crafter.

Monster City Planners combines several game mechanisms into one very small little game that fills me with excitement. The previous City Building games received high marks from both the Parent and the Child Geek groups, but always feel well short of the Gamer Geeks’ expectations. Based just off the rules and assumed game play, I think Monster City Planners will be the first City Building game we have reviewed that will get the Gamer Geek love. First, the card drafting game mechanism is always a hit with the Gamer Geek group. Second, there is a lot to consider on a player’s turn. This game requires some serious hand management and planning, which is exactly the kind of thing that demands strategy and tactics. Two essential items on every Gamer Geek’s checklist. That being said, I don’t see anything to suggest that Monster City Planners will not get everyone’s endorsement.

Note that players must be able to read to play this game. Players who cannot yet read will need to team up with an older sibling or an adult.

And so, after teaching Monster City Planners to my oldest little geek, I asked him his thoughts on the game so far.

Indeed it does! This is most certainly a micro game, but the level of focus a player must use to be competitive makes the game feel much bigger than what it actually is. Let’s play Monster City Planners and see if it lives up to our expectations.

The Child Geeks loved the game. They loved the building, the destroying, and the shifting of pieces in equal measure. The only aspect of the game they didn’t enjoy was the lack of monsters. Despite the game’s name, no monsters are actually ever present on the City Grid card. The City Planning cards suggest monster’s are attacking, but that’s about it. According to one Child Geek, “For a game that is about building a city with monsters, you’d think there would be more monsters.” True, but that didn’t stop the Child Geeks from enjoying themselves. They all voted to approve the game. 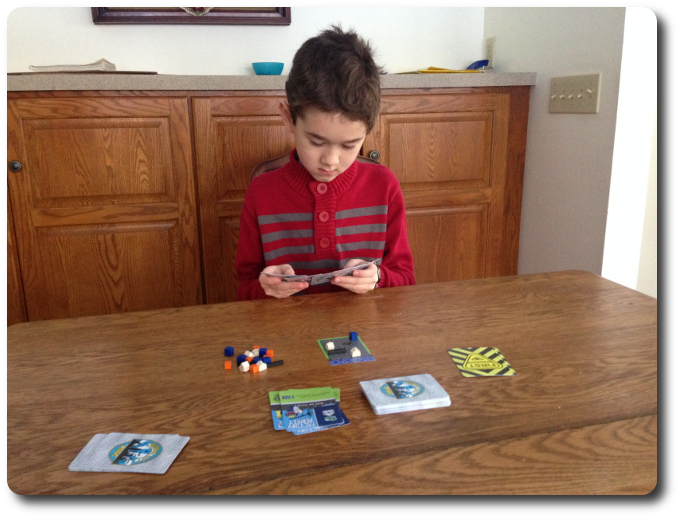 My little geek evaluates his cards – he elected to pass

The Parent Geeks enjoyed Monster City Planners with their families and their peers. The game is very well-balanced and the Parent Geeks never felt like they had to hold back with their children and could play as competitively as they liked with their friends. According to one Parent Geek, “This is a fun little game. I very much enjoy how every card is worth points or can be used as an action.” Another Parent Geek said, “Wow, you really have to think about what cards you have to play. I’m surprised I’m putting so much effort into such a little game.” The only aspect of the game that the Parent Geeks didn’t like was the size of the City Grid card. One Parent Geek remarked “This is a great game, but I’m annoyed at how small the playing area is.” Despite its size, the game scored big points and all the Parent Geeks voted to approve it.

The Gamer Geeks were not impressed with the game until after the first round. When they saw how the scoring was calculated, they took the second round much more seriously. Each game was highly competitive and intense. Which, honestly, made me laugh. It’s funny watching 4 adults lean in real close to a single card at the same time. I kept hoping they would bonk heads like the Three Stooges, but it never happened. According to one Gamer Geek, “This game does just about everything right. I wouldn’t call it a micro game, though.” Another Gamer Geek disagreed. They said “This is most certainly a micro game. It’s small, fits in your pocket, and plays big. Excellent example of a micro game, in my opinion.” While the Gamer Geeks argued about the definition of a micro game, they all agreed that Monster City Planners was worth their time at the gaming table.

I very much enjoyed Monster City Planners. It’s a game that proves you don’t need big bits to have a good time. It’s a tight game that always has me thinking hard and smiling broadly. The double-sided City Grid card allows for players to tweak the game by providing more or less space to build. This, in turn, results in a faster and more competitive game or a more relaxed and casual game. Both played equally as well and received high marks from our players. Do sit down for a game or two if the opportunity should present itself. I think you’ll find this little card game to be big fun.