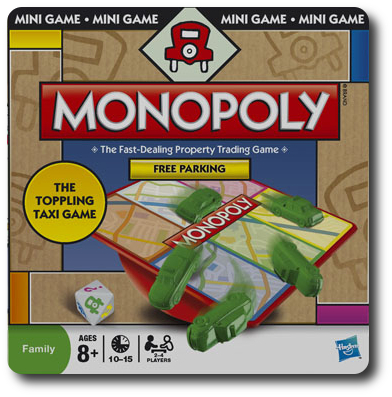 Here’s the problem you have to solve: you have a lot of cars you need to park and very little in the way of space to park them. Thankfully, the owners of the cars don’t care if they get some dings and dents, but only to a point. Your job and challenge is to park all your cars before your opponents do. Space is limited and there is literally a tipping point where all your hard work will fall to the floor!

Monopoly Free Parking, by Hasbro, is comprised of 20 green plastic Cars (referred to as “taxis”), 1 eight-sided die, and the game box everything comes in that also serves as the board on which the game is played. It’s a “mini game”, so it’s meant to be small. All the parts are made of solid plastic and the game is mini enough to easily travel with, making it a good one to take on long trips or just to have around for an easy game when time permits. 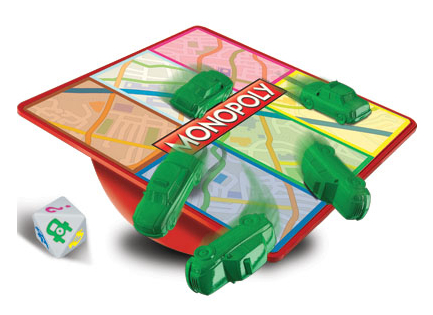 Second, distribute the green plastic Cars to all the players. The number of Cars each player will receive is based on the number of players in the game.

Third, determine who will go first and hand them the die.

That’s it! Time to park some cars!

The game is played in rounds with each player taking a single turn by rolling the dice. The possible die roll results are summarized here.

The car symbols (six in total) represent one specific game playing area. The playing area is divided into six equal rectangles that match one of the colors on the die. If this result is rolled, the player must attempt to place one of their Cars in the designated parking area (also referred to as “zones”) as determined by the dice color rolled. Placing a Car is a balancing act and the goal is to place the Car in such a way that it will not cause the playing area to tip over. A player may place their Car anyway they choose, but two wheels of the Car must be in the designated parking area at the very least. Not touching it, mind you. The wheels need only be within the parking area. This means players can park their Car upside down, on their side, etc.

This symbol allows the player to place their Car in any parking area. The same rules for Car placement apply, except the player can have as little as 1 wheel in the parking area space instead of 2.

This symbol requires the player who rolled it to take one unplayed Car from every player and then place one of their cars using the same rules as the Question Mark.

The first player to have played all their Cars or have no Cars left wins the game. It is perfectly possible to win the game if an opponent takes a player’s last Car due to the Police Officer being rolled on the dice.

If the die result is a Car, play one of the five Cars to the Monopoly Free Parking playing area in the same zone that matches the die color. Wait until the game board stops wobbling. If the Car remains, roll again. If the Car falls of, the player’s turn is over.

If the die results in a Question Mark, the player balances one of their Cars in any space. Again, wait for the game board to stop wobbling. If the Car remains, roll again. Otherwise, the player’s turn is over.

If the die results in the Police Officer, the player’s turn is over.

If the player gets all five cars to remain on the game board, they are awarded a free Taxi ride to any location on the board immediately. Once they arrive, they can take any actions as they would normally. Otherwise, the players turn is over without further penalty or action.

I really challenge my little geeks with the games I put on the table. Many times over, the games I teach and ask them to play are not targeting their age group. All this means is more time being spent learning the game, and skills learned in one game are used as a base to develop future skills. In essence, each time you teach a game, you make the next game you teach that much easier. To date, I’ve taught my little geeks games that, by all rights, shouldn’t be playable by them whatsoever. But they do play them and sometimes they play them very well.

Introducing games like this to them is a huge step backwards as far as skill progression goes. Geek wise, they’ve surpassed Monopoly Free Parking, but age wise, they are spot on. I can easily predict that my little geeks and those Child Geeks we play games with will have no problem learning and playing this game, but I doubt it will keep my little geek’s interest for long. Like I said, they are used to games with much more meat, and once you get a taste for the larger games, it’s hard to be satisfied with something simple.

Parent Geeks will roll their eyes when presented with this game, as will the Gamer Geeks. In fact, I doubt the Gamer Geeks will give it much more than a single play and call it quits. The Parent Geeks will grow to enjoy it, however, as their Child Geeks can play this game and it allows for family play, not to mention exceptionally casual game play. All that remains to be determined is the level of endorsement that each group gives, but I’m pretty sure I know how that will go, too.

And so, after I took the 30 seconds needed to explain the game and set it up for our first play with my family, I asked my little geeks their thoughts of the game so far.

“Looks like fun. Can I play with the cards after the game is over, Daddy?” ~ Nyhus (age 5)

Both of my little geeks are eager to play, but I think they are most excited about playing with me versus the game. Heck, I don’t mind that at all. Let’s see if the game proves to be any fun for my elite little geeks or is nothing more than a brief footnote in their gaming career.

As expected, my little geeks had no problems with the game. In fact, none of our Child Geeks had problems with it. The only issue they had with the game was where the game was placed. Putting it on a raised surface is a good idea as it allows all the players to easily reach the game. Bumping the raised surface is a bad idea as it tips the cars over prematurely. The Child Geeks did a lot of bumping, and I’m not altogether convinced that some of them were “by accident”. Regardless, all the Child Geeks enjoyed the game, but it didn’t keep their interest for long. This is a mini game and it kept them occupied for a short time.

I should also note, because I personally find it amusing, that the Child Geeks were most pleased to be asked to play a very simple game after all the much more complex games I strap them into a chair and force them to play. (…no, not really…about the forcing, I mean…)

Gamer Geeks, as predicted, played the game once with much smack talk and then forbade me from ever bringing it to the table again. 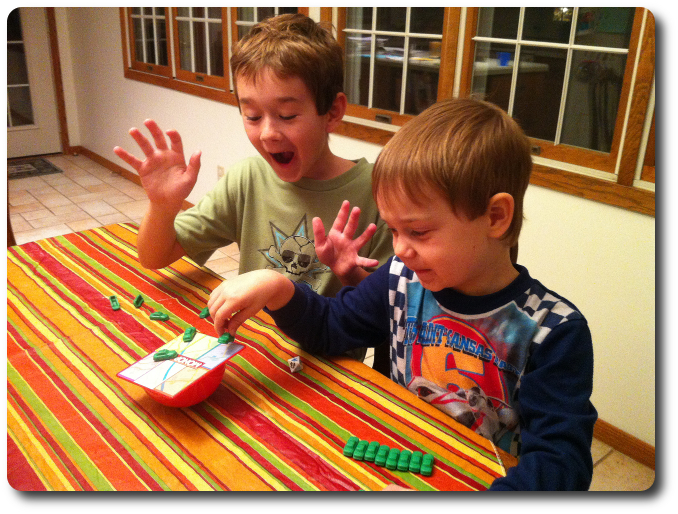 Gamer Geeks, this is a very simple game of balance. Works just fine as a quick game, but it’s actually too quick and small to be of much use to you. Jenga has more depth than this game, as does Pick Up Sticks. It’ll challenge your patience, if nothing else.

Parent Geeks, while poo-pooed by your peer group, you had nothing but good things to say about the game when you played it with your little geeks and family. As fate and the universal law of irony dictates, the little geeks out bested and out smarted you in this game. The very same game you said was too easy. It must be their small hands and fingers that give them the winning edge. Regardless, you said everyone was a winner when the game was at the family table.

Child Geeks, you really enjoyed this game despite it being very simple. In fact, after reflecting on this odd point, I think you enjoy it because it is simple. Simple, but not brainless. You’ll be challenged when you have to place your car in an already terribly overcrowded and dangerously tipping sparking space. When it crashes, you’ll a laugh. And if you are disappointed with all the cars you collected, you won’t have long to think about it because the game will be over in no time.

I personally think Monopoly Free Parking is a silly game I gladly didn’t spend money on (got it as a gift). It’s fun for me, but only because I have little geeks who make it fun. Hasbro made a smart play by making this mini game, with not much substance, into an easy-to-integrate Monopoly board game add-on. Altogether unnecessary, if you ask me, but a brilliant marketing move on their part. This makes the game worth while to a larger audience without actually doing anything more to the game itself. That’s what we call “killing two birds with one stone”.

If you are in the mood for a highly portable dexterity game that can be used as a mini game with the ever popular Monopoly board game, or just a fan of “anything Monopoly”, then grab Monopoly Free Parking. All others can safely go about their lives knowing they are missing nothing.