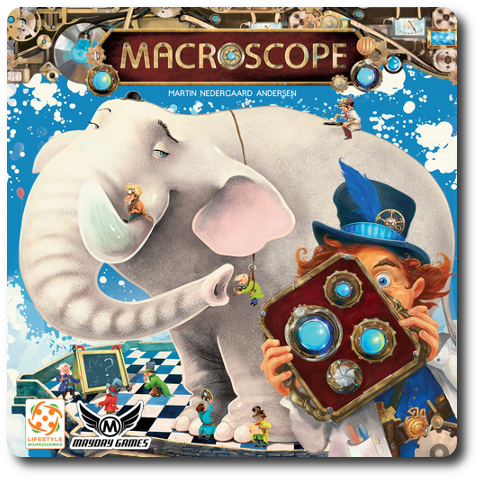 The story goes a little something like this. A group of blind men encounter an elephant for the first time. Touching individual parts, they all identify it as something other than elephant. For example, the gent touching the trunk suggests it’s a giant snake. In this game, players will only get glimpses of the big picture, venturing to guess what they assume they see.

Macroscope, designed by Martin Nedergaard Andersen and published by Mayday Games, is comprised of 54 yellow Victory Point crystals (worth 1 point each), 10 blue Victory Point crystals (worth 10 points each), 200 double-sided Picture cards, 1 Game Round Tracker board, 1 Game Round marker, 2 standard six-sided dice, and the Macroscope (which must be assembled). The Picture cards are thin and paper like, easily susceptible to creasing and folding. The boards are thick and durable. The Macroscope requires some assembly, including the application of stickers, but it’s a one time activity.

To set up the game, first place the Macroscope in the middle of the playing area.

Third, place a Macroscope token at random in each of the spaces found on the top of the Macroscope, covering the “Pizza” Picture card.

Fourth, remove the top “Pizza” Picture card, making certain that none of the Picture cards are visible to the players.

Sixth, give each player 2 yellow Victory Point crystals, placing the rest of the crystals in a single pool off to one side of the game playing area. When completed, the game area might look similar to the following image. 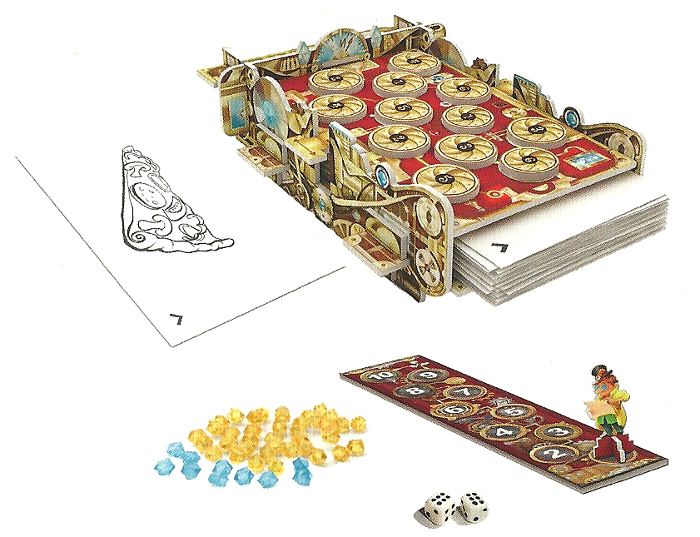 That’s it for game set up. Determine who will go first and let the guessing begin!

A Point of View

Macroscope is played in rounds and turns. A player’s turn is summarized here.

The player should carefully rotate the Macroscope so they have a clear view of it without removing it from the center of the playing area. Arrows on the Picture cards show in which direction the card should be pointing away from the player.

If the player does not guess, they take 1 yellow Victory Point crystal for each token that was removed.

The number of tokens still on the Macroscope covering up the picture determines the number of Victory Points the guess is worth to be won or lost. 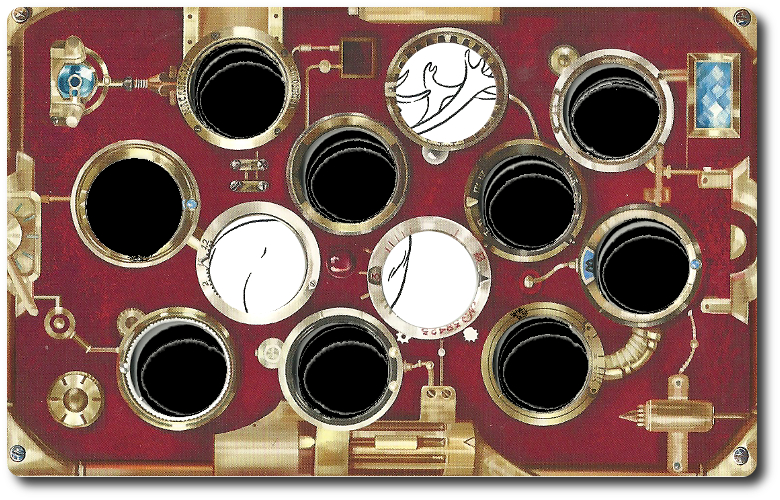 Care to guess what it is? 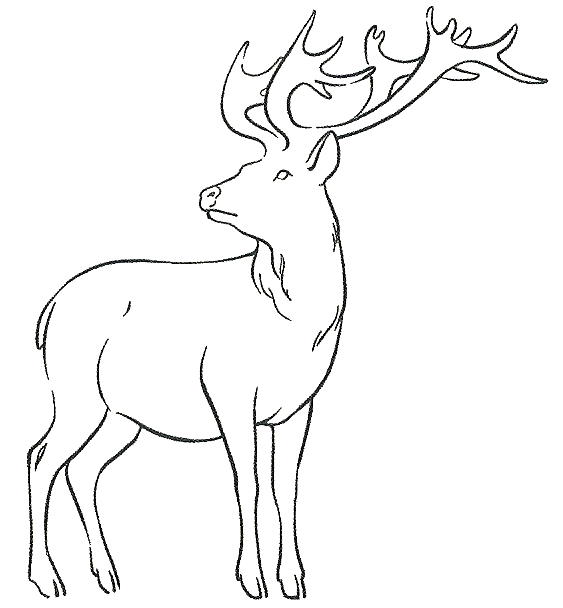 Did you guess correctly?

This ends the player’s turn. The next player in turn order sequence now goes starting with step 1 noted above. Once every player has had a turn, the Game Round marker is advanced to the next space on the Game Round Tracker board.

The Forest for the Trees

After 10 rounds of play the game comes to an end. All players count their collected Victory Points. The player with the most Victory Points wins the game.

You can ignore the dice and just remove a token on your turn. This adds a bit more strategical and tactical thinking to the game, as it allows the player to select that which they want to see or not show to their opponents.

Players can also secretly guess what the picture is. Once all players have written down their guess, the guesses are revealed. The player who guessed correctly (and first) receives 1 Victory Point crystal. This is a good game variant for families or for players who don’t want to be limited to guessing based on their total available Victory Points.

To learn more about Macroscope, visit the game’s web page.

The Child Geeks enjoyed the game, finding it to be a fun and challenging exercise to guess what the image was as it was slowly revealed. According to one Child Geek, “Every time a token is removed, I have to rethink about what it is I am seeing. Is it a whale? A dog? A whale dog?” Another Child Gee said, “I like how you get fewer points when more of the picture is shown. This makes you want to guess as soon as possible.” The only aspect of the game the Child Geeks didn’t like was the Victory Point guessing restriction. This turned out to be more of a hindrance than a game changer, however, and the Child Geeks muscled through it resulting in a full endorsement.

The Parent Geeks also enjoyed the game, finding it to be fun time with both their family and with their peers. According to one Parent Geek, “I like how you earn more points with less information. That makes players really focus in and take some guesses, risking a little to get a possible lot.” While the Child Geeks didn’t care for the Victory Point guessing restriction, the Parent Geeks found it to be a necessary component to game play. As one Parent Geek put it, “I think it is brilliant how they clearly demonstrate to the player the risk versus reward aspect of the game by giving them Victory Points to earn, to spend, and to lose.” When all the games were over, the Parent Geeks voted to approve Macroscope.

The Gamer Geeks weren’t very impressed with the game. In fact, a large number of them found it to not be a game at all. According to one such Gamer Geek, “This isn’t a game. It’s an exercise in guessing. That’s not very fun.” Another Gamer Geek said, “I think this is more of a family and kids game than a gamer’s game. Yes, it has risk versus reward and there is some strategic benefit of not revealing some tokens versus others, but it’s all pretty slim. Yeah, not a game for me.” None of the Gamer Geeks found Macroscope to be a bad game, but all of them agreed that it simply wasn’t a game for gaming elitists. As such, they voted to not endorse it, finding that they could clearly see the game’s worth without taking a guess.

Macroscope does feel a bit more like an exercise in guessing than a game at times, but the importance of the Victory Point crystals quickly brings the game back into focus. The more you risk taking a guess with as little information as possible, the bigger the reward. The thing is, it’s is close to impossible to guess what a picture is until at least 4 tokens are removed, making your average victory around 5 to 4 Victory Points. This kept the total number of Victory Points available to a player fairly small and made each risky guess feel pretty … well … “risky”.

I liked the game, but only when I played it with my family and peers. This is most certainly not a gamer’s game, but it’s a fun one nonetheless. The game has enough Picture cards to keep it fresh for a number of game playing sessions and randomizing which tokens are removed makes certain that every round is different. A fresh new take on a guessing game that is surprisingly cutthroat with the right group. Fun with adults and kids, do give this game a try and “see” if it works for you and yours. You might like what is revealed.