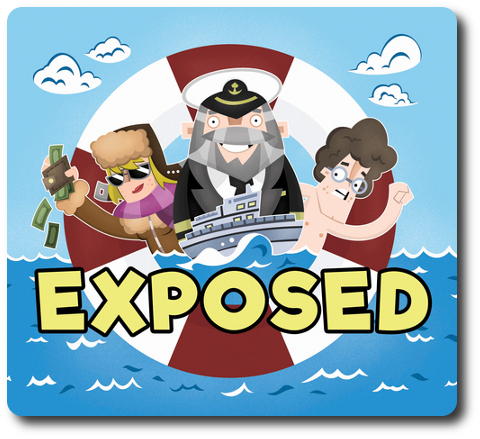 You and several of your fellow thieves will be sneaking aboard a fancy yacht in hopes of robbing the party guests blind. But there is no honor among thieves, it would seem. While the goal it to get as much money as possible, the second objective is to pin everything on another thief. You must be quiet and you must be quick, or you’ll end up being tossed overboard.

Exposed, designed by Brian Henk, Clayton Skancke, and to be published by Overworld Games, will reportedly be comprised of 36 Identity cards, 36 Guest tiles, 50 Wallet tokens, 6 Reference cards, and 4 Target tokens. As this is a review of a prepublished game, I cannot comment on the game component quality. Artist Adam Foreman brings his talent to the game by illustrating colorful and highly stylized characters used on the Identity cards and Guest tiles.

Third, take the Identity cards and remove any that have a number value in their corner that is greater than the total number of players. This exercise is identical to the one completed for Guest tiles. Place removed Identity cards back in the game box and shuffle the remaining cards. Deal 1 Identity card to each player, face-down. Players should look at their Identity card, but keep it hidden. Listed item abilities are not usable. 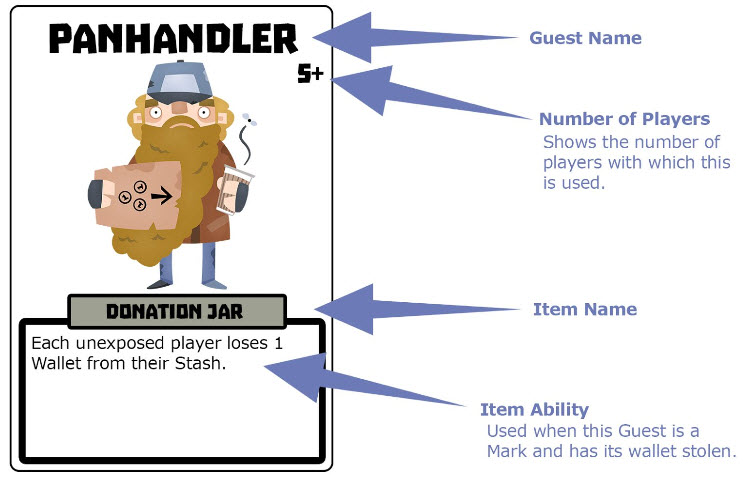 Fourth, and depending on the number of players, 2 to 4 random Identity cards will be marked using the Target tokens. These identify guests on the ship that will be easy to steal from. Place the drawn Identity cards face-up and to one side.

Fifth, give each player a Reference card and determine who will go fist.

Exposed is played in rounds and turns with no set number of rounds per game. A player’s turn is divided into 2 phases. Each phase is summarized here.

A player must take 1 action, but they have 4 to choose from.

Move on the Yacht 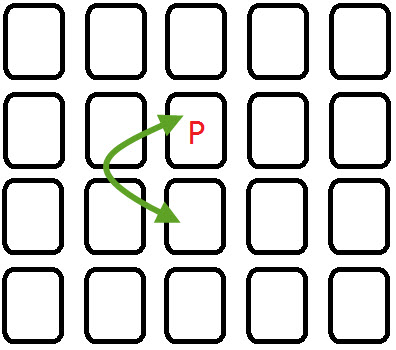 A player moves through the crowd to find an easy mark. Once they do, they can attempt to pick their pocket or purse. Any Guest tile that is found on the 8 spaces surrounding the player’s Guest tile can be targeted. 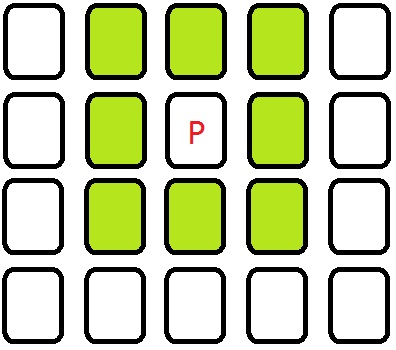 Interestingly enough, a player can steal from themselves. This is a great way to throw opponents of the scent, as there is a great deal of bait on the yacht meant to trick the players into stealing goods that will attract too much attention. For example, the corners have 2 Wallet tokens, but stealing from there helps the player’s opponents determine which Guest tile is a thief.

If the player thinks (or they guess) they know which Guest tile belongs to one of their opponents, they can expose them. The player selects 1 Guest card that is in the same row or column as their Guest card and flips it over to the “exposed” side. 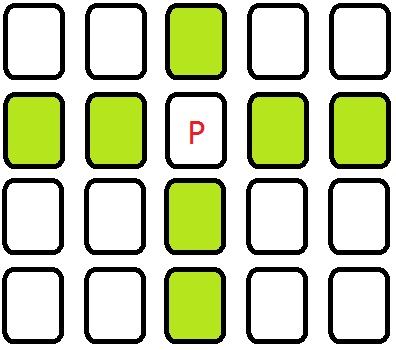 If an opponent was exposed, they flip their Identity card face-up and place half of their pilfered Wallet tokens from their stash to their now exposed Guest tile. The other half go to a new pile referred to as the “Lost and Found”. The active player then gets to take 1 Wallet token from the Lost and Found, adding it to either their stash (if they remain unexposed) or to their Guest tile (if they are exposed).

Players cannot expose themselves at the party. That’s wrong on several different social and legal levels.

If the player remains unexposed, they can opt to show their hidden Identity card to another opponent who is also hidden without revealing it to any other unexposed opponent. The player then flips over any unexposed Guest tile, exposing it. This might expose an opponent. As weird a move as this may sound, it’s actually exceedingly wicked. You have just shown an opponent who you are, giving them the ability to point you out. But if they hunt you down, the other players will know who they are, too.

After completing 1 action, the player cleans up the grid.

To learn more about Exposed, visit the publisher’s website or visit the Kickstarter campaign.

The Child Geeks, by far, were the biggest fans of the game. They loved the hunt and the excitement of trying to stay hidden. They also had horrible Poker faces and usually outed themselves via fits of giggles or bragging. Not that any of it mattered. Even if you are exposed, you are still able to win the game. The only negative to being found is that you have only 1 route to victory instead of 2. For some Child Geeks, this actually helped them. According to one such Child Geek, “I found myself attempting to hide more often than steal. Now that everyone knows I’m a thief, I’m going nuts!” Another Child Geek said, “It’s fine trying to figure out who everyone is, but I find stealing the wallets to be the boring part.” Which I found to be really funny. What the Child Geeks liked most was the cloak and dagger game play. Yes, stealing wallets had its joys, but the real fun was the hide and seek. When the games were over, all the Child Geeks voted to approve Exposed. 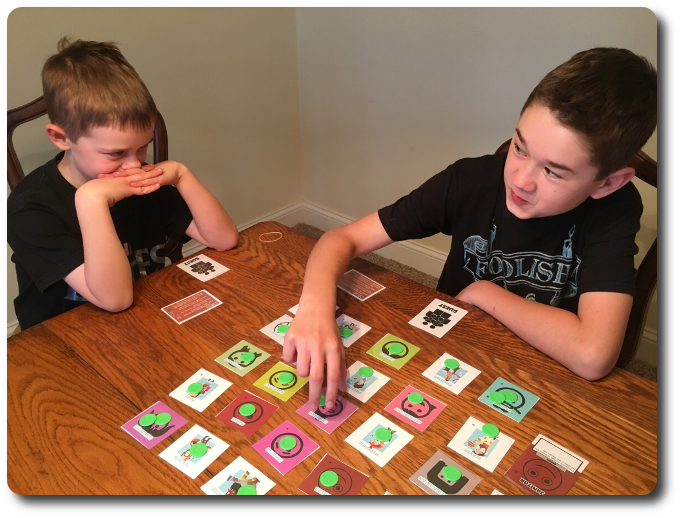 Some of the Child Geeks took the game very seriously, while others just wanted to have serious fun

The Parent Geeks played the game on a higher cerebral level, but were just as nasty to each other. According to one Parent Geek, “The faster you can expose an opponent, the more you can avoid them in the process.” Which is an excellent point that I didn’t think of until later in our game playing sessions. It’s not only important to remain secretive, but to also keep your distance. Plus, an exposed player Guest tile with Wallet tokens can be the victim of a crime, making it fun to attempt to pick the pockets of an opponent. Another Parent Geek said, “A neat and fun game of deduction and bluffing. I can see playing this with my family and friends at the home or at parties.” When all the games were over and the yacht was back to shore, all the Parent Geeks voted to approve Exposed.

The Gamer Geeks liked the premise of the game, but were disappointed with its game play. According to one Gamer Geek, “This game is well designed, rule-wise, but fails to elevate itself to a level where I feel challenged or engaged. I think it has to do with the fact that there are no real consequences. You can be slowed down, but never really stopped.” Another Gamer Geek said, “They should have incorporated better reasons to stay hidden. If you get caught, maybe you get thrown overboard. Better yet, the yacht is only at sea for a certain number of rounds, giving players a reason to take risks.” What the Gamer Geeks were looking for, and did not find, was a meaningful system of risk versus reward. What they did find was a well designed game that was light and entertaining, but not for them.

Some of our players referred to Exposed as a “children’s game” and even a “party game”. I tend to disagree. While a Child Geek certainly can play the game and Exposed would work fine at a party, this is not a game you can look away from or take too lightly once you start playing. To do it right, you need to watch, learn, and speculate. You must also bluff and do a lot of smack talk to keep the attention of other players on or off you (depending on where you want their eyes). The game is light, make no mistake, but its simplistic game play is nothing more than so much paint on a well-structured frame that is built upon the principal of deception. You won’t lie in Exposed, but you will play a continues shell game with your opponents as they do the same to you.

The game’s difficulty is directly proportionate to your opponent’s ability to keep a secret. If they aren’t very good at it, the game gets pretty “ho-hum” very quickly. Exposed is dependent on the players trying their damnedest to keep undercover and steal as fast as they can. In this type of environment, the game is a lot of fun as everyone is running around being as careful as possible, while taking pot shots at each other. If even 1 players doesn’t play by the spirit of the game, things start to unravel. This can make the game feel brittle, but in truth, it’s the players who are causing the issues, not the game.

Exposed is the kind of game you’ll play and think about how you could have played better after it has been put away. More importantly, you’ll be thinking about how opponents outsmarted you. Luck, guile, and moxie will help a player, but it won’t earn them victory. Players are somewhat dependent on their opponents making mistakes, but the player won’t know about them if they aren’t paying attention. If you like games were risk and reward truly payoff, a quick mind can help just as much as hinder, and the real challenge is out-thinking your opponents, then do play Exposed.