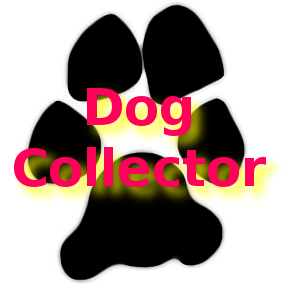 Poodles, Collies, and Dalmatians! Oh, my! Just about every kind of dog you can imagine is represented in the game, from small to big and everything in between. Collect breeds for points and score big!

Dog Collector is comprised of 64 cards that represent different dog breads. Included on each card is a card number, a colored border, a picture of a dog, the dog’s breed, the card’s action (used when discarded), and the card’s point value when scored at the end of the game. 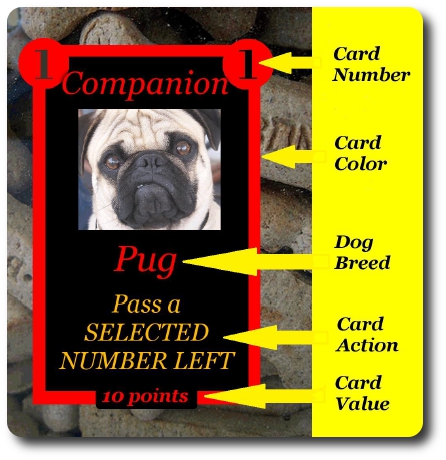 Example of one of the 64 cards included in the game

To set up the game, shuffle the deck of cards and deal out to each player 7 cards, face down. Players should keep the cards in their hand hidden from the other players at all times. The remaining cards should be placed face-down in the center of the playing area to create the draw pile and the first card on top of the deck flipped over to create the discard pile. You will also need a sheet of paper and a pen or pencil to keep track of the player scores.

Determine who the first player will be and start the game.

Welcome to the Dog Show

Dog Collector is played in turns and rounds. Each player will have a number of turns during a single round. On a player’s turn, they will do the following steps in sequential order:

If a player discards their last card (leaving nothing left in their hand) and do not receive any cards from the pass, they draw 3 cards from the draw pile.

Once the draw pile has been depleted, the round is over after the current player completes their turn. All players now add the card values together that are part of their played sets on the table (not cards still left in their hand). This score is recorded for each player and added to any scores from previous rounds.

If the endgame condition it not yet met, start a new round by completing the game set up steps. The next player in clockwise order that is after the player who started the last round is now the first player for the new round.

Once all players have had a chance to be the first player of a round and the round ends, the game is over. For example, a 4-player game will end on the 4th round. Add the card values from played sets for the current round to the player’s total score so far.

Dog Collector has two things going for it that I think will make it a success with the Child and Parent Geeks. First, Dog Collector has dogs. Lots of dogs. Unless the player is a dog hater (of which, none of my friends and family are), the cards will be enjoyed. Second, the game is very simple in regards to play and how to collect points. Easy games to learn and to play tend to always be a hit with families and the little geeks.

Not so much with the Gamer Geeks. In fact, all it took was reading the game rules once to know that Dog Collector was most certainly not a game my gamer elitist friends would enjoy playing.

When I pitched the game to my little geeks, they were overjoyed just to look at the cards. On a personal note, my family is very seriously considering getting a puppy as we feel our little geeks are at the right age to help care for it. We spent a good 15 minutes just looking at and discussing all the different dog breads. Eventually, I got my little geeks back on track and I explained the game to them.

After explaining the game, which took all of about 5 minutes, including examples, none of the little geeks had questions, but my 4-year-old was matched up with a parent who could read. As I set up the game and dealt the cards, I asked each little geek their thoughts on the game so far.

All the little geeks, including the 2-year-old who just barged in and made himself comfortable on my lap, seem to enjoy the game! Let’s give it a few plays and see how well it is received.

Dog Collector isn’t doing anything new in regards to game play. There are other games that have very similar game mechanisms and play style. Despite not breaking new ground in the world of games, it plays very well and delivers a quality experience. Games are fast and there is enough information visible at the table to provide the player who is paying attention an edge when they decide which cards they need to discard. But that’s where any game depth ends. At its heart, Dog Collector is a set taking game with the added bonus of having a random action card put into play to might slightly upset the other players.

For the Child Geeks and Parent Geeks, the game depth was perfect. Dog Collector is light and provides just enough challenge to engage a casual gamer without boring them or making them run away with their tail between their legs. The rounds are long enough for everyone to collect a good number of points without being so long as to make the game drag.

Gamer Geeks played one game and didn’t ask for another. All the Gamer Geeks I played with agreed that the game wasn’t bad, just not interesting to them. Again, Doc Collector is a casual game and not many casual games keep or even draw a Gamer Geek’s interest. At least not for long, anyway. 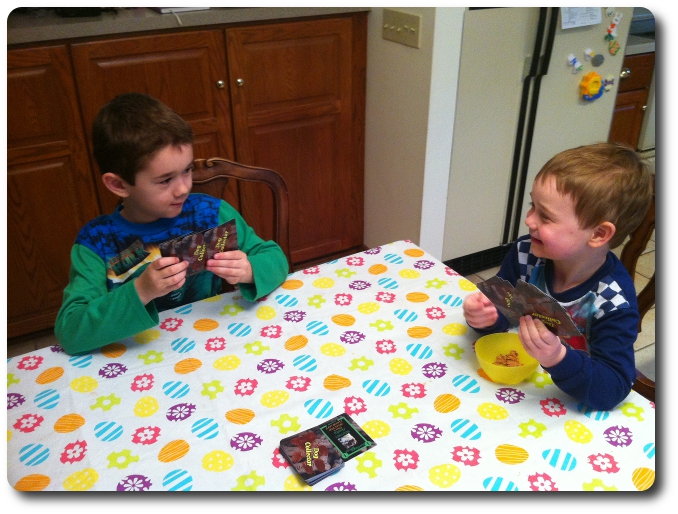 Round three and my little geeks are still having fun!

Gamer Geeks, this is not a game that is interesting or challenging enough for the gamer elitist or hardcore player. It’s a set collecting game with dogs as the theme and specific card actions to cause only the slightest of disruption to the game, but without penalty to the players if they cannot meet the action’s requirements. Very little to no strategy or tactics is needed to play the game to completion. ‘Nuff said.

Parent Geeks, this is a fantastic card game to play with the family and non-gamer friends. Very player friendly and easy to teach, the game can be introduced and play started in minutes. Dog lovers will, of course, experience a great deal of “puppy love” for the dog pictures and the number of breeds represented in the game is pretty impressive. If nothing else, the players will leave the table with a better grasp of just how diverse our canine friends are.

Child Geeks, this is an easy to learn and fun to play card game. You will need to be able to read, add, and match colors, but having an adult or older sibling help won’t reduce the fun of the game for you. Enjoy the many, many different dogs and the easy way to collect points. And if you should make other players howl at the table when you force them to pass a card, all the better!

I found Dog Collector to be an enjoyable game, especially when I am used to much heavier and lengthier games. It was a refreshing change of pace to learn and teach a light game after teaching heavier games to my little geeks. In fact, I think the game somewhat recharged my batteries and got me hungry again for games with more meat and potatoes for me to chew on. The level of enjoyment that my little geeks experience was plain to see and everyone had a great time playing. That being said, you won’t find me slapping this on the table at my next game group meeting, but I’ll always make the time to play it with my family. Do take a look at Dog Collector if you are looking for a fun to play and easy to teach family friendly card game to play at your next casual game table gathering.