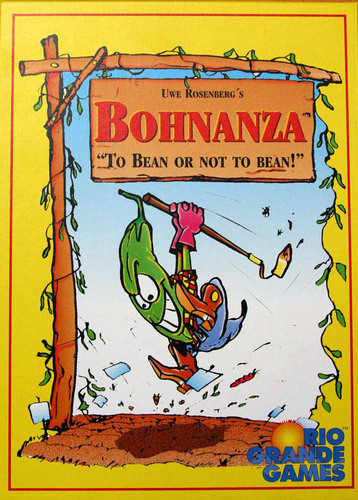 Bohnanza, designed by Uwe Rosenberg of Agricola fame, is a set collection card game about bean farming. The other unique feature of this game – let’s face it, there are not many games about bean farming – is that players are not permitted to reorder the cards in their hand. This is a vital part of the game.

The deck consists of up to 154 cards including up to 11 types of beans. Some rare, some common. Depending on the number of players, some bean types are removed from the game. Each player begins the game with 2 bean fields. The fields can hold any number of cards of a single bean type.

The player then draws two cards from the deck and places them in front of their playing space. There then follows offers of trading beans with other players, after which any player with traded beans must plant those beans into their fields. Trading is the means by which players can purge their hand of undesired cards that they would otherwise be forced to plant, wrecking their grand plans for a more profitable harvest. For this reason, trading often involves giving beans away for nothing in return.

Once the active player calls an end to trading, all drawn and traded cards are planted.

Finally, the active player draws three cards, adding them to the back of the queue in his hand.

Harvesting can be done at any time and is done by clearing the field of beans. If the harvester has already collected enough cards of that bean type, they may convert them to gold. The required number depends on how common that bean type is. For example, the rare garden bean yields 2 gold for 2 beans and 3 for 3, while the very common coffee blue bean yields only 1 gold for 4 beans and 4 gold for 10 beans. Gold is tracked by holding on to cards (the card backs depict a gold coin), so earning 4 gold from 10 blue beans is done by turning 4 of the beans face down (in treasury) and returning the other 6 cards to the discard pile.

A third bean field can be purchased at any time for 3 gold. When the deck runs out, it is reshuffled.

The game ends when the bean deck has been exhausted 3 times. Final harvests takes place before final scoring. The player with most gold wins!

This is a game that I had played many times before with non-gamers as a so-called “gateway game”. I had found it to be quite well received, but it runs a little too long to attract the uninitiated to the hobby. Because of the bargaining/negotiation component, I had not thought of this as a game to play with my little geeks. I grabbed this off my shelf at the last minute to keep said geeklets entertained in between my sister’s wedding ceremony and the reception, but I did not really believe that it would be suitable for children aged 4 and 6 years.

It has only been 2 weeks since that fateful day, but my 6-year-old son has gone absolutely bohnanzas for this game, and that infectious enthusiasm has engulfed his little sister, too. Our first game did not go so well. We used the more confusing Fan Edition of the game and did not have time to finish, but the experience was enough to get my son hooked. Thereafter, he has been pleading to play this game at every opportunity. My younger geek has needed just a little assistance with play. The game duration tests her attention span, but this game has worked very well indeed.

I was most impressed by my children’s bargaining skills. Bohnanza, like many trading games, provides a rigid negotiation framework. We, at Father Geek, are big advocates of using the “safe environment” of tabletop games to allow children to enhance their geek skills. I have now learned that both of my children can drive a hard bargain, at least when dealing with their father. I think their mother gets an easier run.

Any cons? Yes, I still feel this game runs a little too long. Sound strategy is self-evident: try to persevere with the beans already planted, to maximize profit; negotiate for win-win outcomes (hopefully a bigger win for you than for the other guy); and in general, go for beans that other players haven’t planted (the “Ryan Sturm principle“). I agree with the conventional wisdom that buying a third bean field is rarely worthwhile.

In short, Bohnanza is good for introducing the concept of trading to young children. It is a good stepping-stone to other trading and negotiation games with more degrees of freedom. While it is getting heavy play in my family right now, I would be surprised if we are still reaching for this title next year. That said, Bohnanza is good value for the money, ideal for travel, but most of all, it opens up new dimensions for sprouting gamers. (Boom! Boom!) 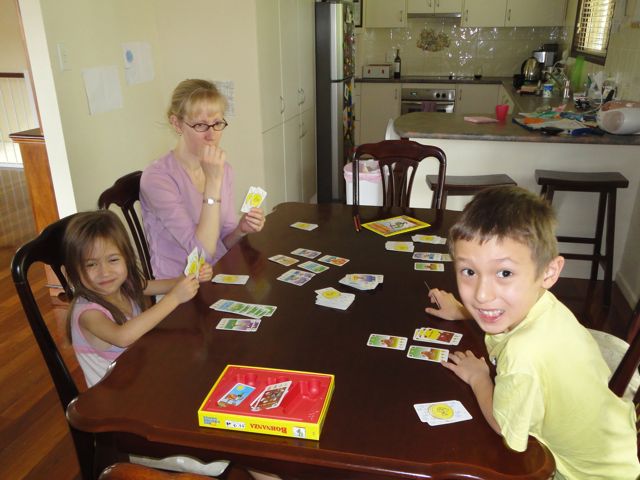 They prefer to be called bean entrepreneurs

One Response to Bohnanza Game Review