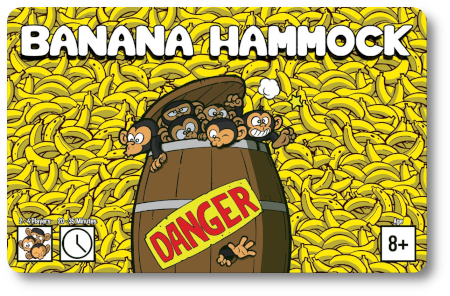 Working at a banana packing company has its perks. The hours aren’t bad, and you get to eat all the bananas you like. The only problem is that your bosses are monkeys. Not as in “intolerable imbeciles that cannot run a business.” We are talking real monkeys: tails and all with a penchant for eating your bananas. You have to meet your packing quota, but those monkeys won’t leave you alone. You’ll need to be creative and fast to pack as much as you can before you are overwhelmed by all the monkey business.

Banana Hammock, designed by Mario Battaglia, Mark Rivinius, Peter Krentz, and to be published by Mind Ramen Games, will reportedly be comprised of 60 Banana cards, 15 Banana Peel cards, 15 Monkey cards, one Finale card, and four Player/Reference cards. As this is a prepublished game review, I cannot comment on the game component quality. The illustrations by Salvador Raga are colorful and humors, adding additional mirth to a game already heavily dripping with laughter and eye-rolling goodness.

Second, shuffle the remaining cards and deal five to each player, face-down. This is the player’s starting hand. They should pick up the cards and look through them but not show the cards until played.

Third, place the Finale “Barrel Full of Danger” card back with the deck and shuffle. Place the deck face-down next to the Banana Peel pile. This is the draw deck for the duration of the game. Leave room for a discard pile.

That’s it for the game set up. Determine who will go first and begin!

We Have Fun and Monkey Games

Banana Hammock is played in turns with no set number of turns per game. A player’s turn is summarized here.

Phase One: Start of Turn

Don’t overthink this. The player draws one card from the draw deck and adds it to their hand. Some cards drawn need to be resolved immediately.

The player must now play one (and only one) Monkey card or as many Banana cards from their hand as they like.

Monkey cards are played face-up in front of the player and read out loud. The player then resolves the action noted on the card. Monkey’s come in all shapes and sizes but always cause trouble. 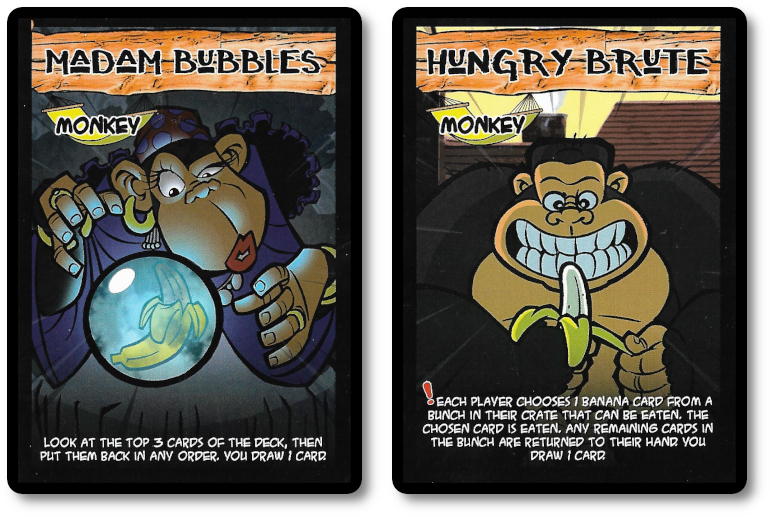 Banana cards can be played singly or in bunches, where a “Bunch” is two or more Banana cards played to a Crate. So what’s a Crate? Good question. A Crate is nothing more than a location in front of the player where they stack their Banana cards. These will count for points at the end of the game. 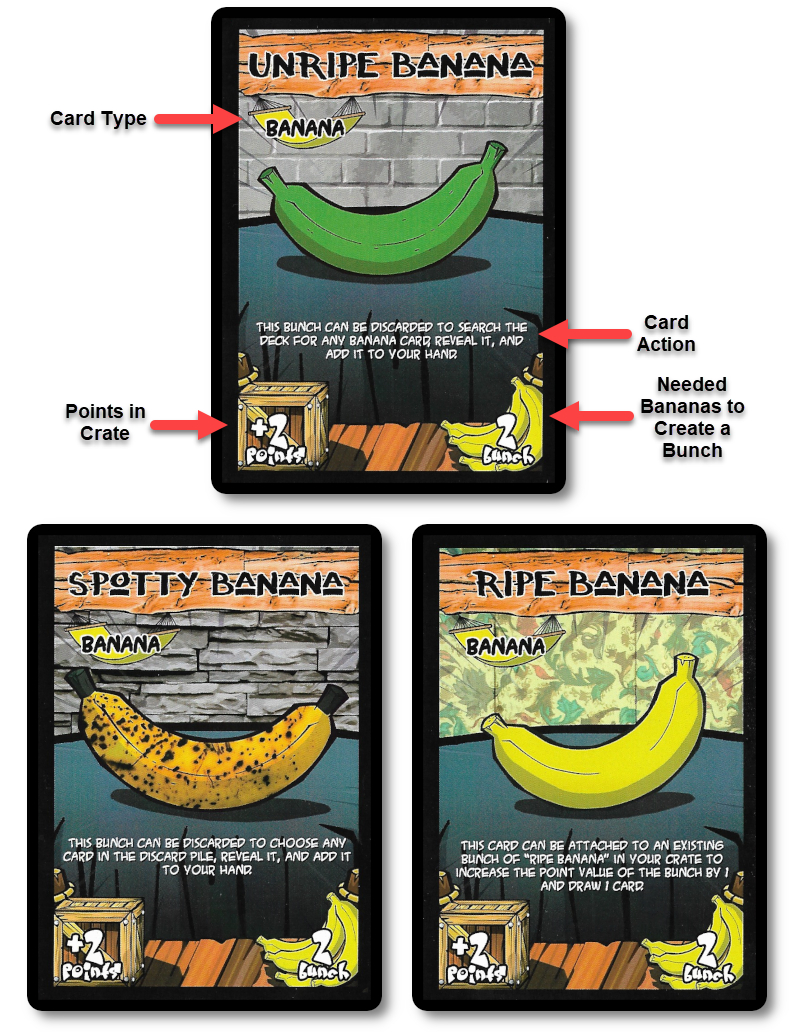 While a banana is a monkey’s best friend, they are not always beneficial. There are bananas in the game that will harm the player and cost them points. 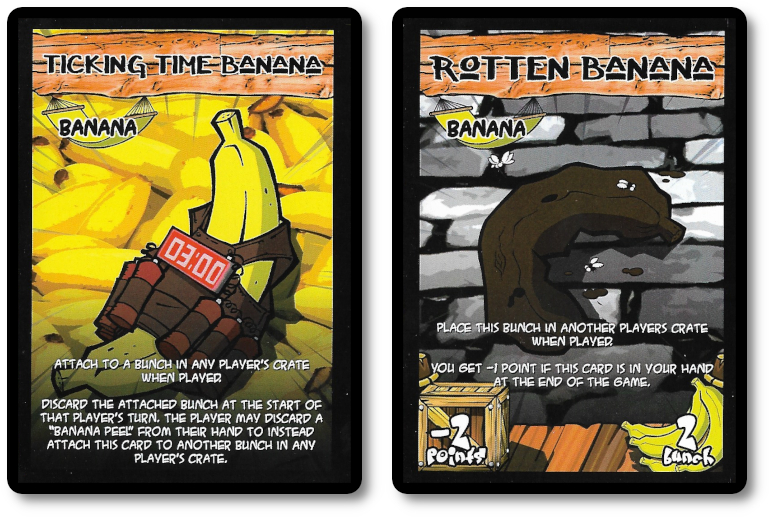 As the game progresses, the player will be instructed to eat a banana. In game terms, the player discards a Banana card. In return, they collect one Banana Peel card, adding it to their hand. This leftover banana wrapping is not trash by any means. Not only can be it be used for points, but it can also be played to counter an opponent’s card that might cause the player to lose points or a turn. 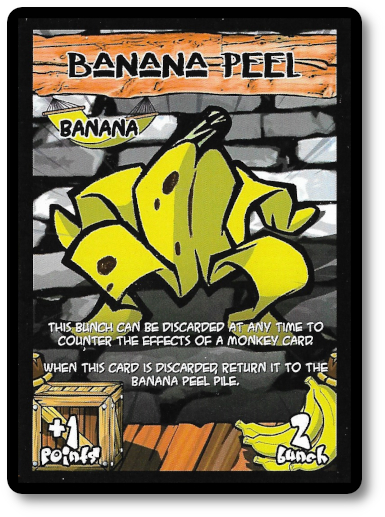 Regardless if a Monkey or if one or more Banana cards are played, the player can activate cards for their action in their Crate, resolving them as noted by the card. A player can also play Hammock or Unhammock a card, but only once per turn. The Hammock is a location in front of the player where they can store a card for later. Taking a card back from the Hammock puts it back in the player’s hand.

Once the player has resolved any cards with effects triggered per the card played, the player’s turn is over. The player must now discard down to no more than five cards in their hand. Cards in the player’s Hammock are not counted towards the player’s hand size limit. 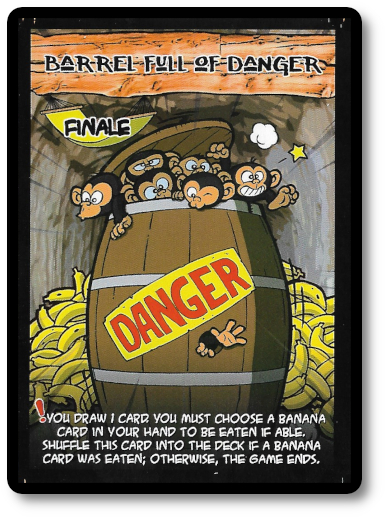 The winner of the game is the player who has collected the most points via Bunches of Bananas in their Crate. Keep in mind that a player can collect negative points in their Crate (via the Rotten Banana), and Monkeys can get in there, too, causing mischief.

To learn more about Banana Hammock, visit the game’s website or visit the Kickstarter campaign.

The Child Geeks had a lot of fun with the game, laughing at the ridiculous monkeys and the many different ways the players interact with each other while playing. According to one Child Geek, “The game reminds me of Exploding Kittens, but with less exploding and a lot more monkeys.” Another Child Geek said, “This game is all about not taking yourself or the game too seriously. You won’t do very well if you can’t be at the butt end of a joke or don’t like being messed with when playing a game.” Very true. This game is all about player interaction, and that type of interaction is seldom to the player’s benefit. Opponents will continually be hampering their progress to score points. When the last banana was in the crate, the Child Geeks gave Banana Hammock their full approval and applause.

The Parent Geeks were not sure if they wanted to put this game on the table. After all, the term “banana hammock” means something else entirely. However, the game proved to be entertaining and appropriate for the family. According to one Parent Geek, “The game has a lot of tongue and cheek in it, and other than the obligatory monkey who throws some poo, I found nothing about this game to be inappropriate for the kids and myself. In fact, we all enjoyed the game a great deal.” Another Parent Geek said, “Lighthearted and fun. A new take on the game with exploding cats that I found to be refreshing with just the right amount of player interaction.” When the final monkey was put back in the cage, the Parent Geeks voted and determined that the game’s monkey business was a great addition to their family gaming table.

The Gamer Geeks were not overly impressed. According to one such Gamer Geek, “A game that left me bored and uninterested. Not because it is a bad game. It’s just a game I’ve played before. Draw a card, do something, mess with a player, and hope you don’t stop the game. Good stuff for casual players and the kids, but not a game I would play with my friends at our table.” But not all the Gamer Geeks viewed the game this harshly. Another Gamer Geek said, “You can only find this game’s value within the proper context in which it was intended to be played. It isn’t a game meant to make you think or challenge your ability to solve a problem tactically. It’s a game meant to get people to the table and laugh. I think it does a great job doing just that. Not much of a game, really, but it brought a smile to my face.” When all the bananas were eaten, the Gamer Geeks decided that Banana Hammock didn’t satisfy their appetite.

I had fun with this game. I didn’t find it overly difficult, and it’s most certainly a game meant to be played with a casual crowd. It was fast and kept all the players engaged because anything can happen at any time. This was a nice game mechanic with a random card that stops the game – maybe. It all depends on if you can avoid it. But sometimes you don’t want to. Sometimes you’ll want the game to end because you’ll think you have the most points. Talk about sneaky.

The way the player scores points is fiddly with the need to group Banana cards, but it works. It also forces players to consider if they want to drop all their Banana cards for points (which will leave them open to not being able to avoid the end of the game) or keeping a banana or two in reserve “just in case.” This is where the Hammock comes in and is not really utilized as well as I thought. It’s nice to have a sidebar for cards later, but almost all of our players ignored it. You can always play a card in the game, and keeping a card in reserve was only done by those players looking to score big points with possible cards in the future. This leads me to believe that the “hammock” was introduced as more of a gage than an actual tactical mechanic.

Overall, I was pleased with the game. I don’t believe for a moment it’ll ever appeal to the gaming elitists, but everyone else enjoyed it. The Child Geeks and Parent Geeks, new and casual players, all laughed and had a great time. Only the Gamer Geeks grumbled sarcastically with the occasional cynical chuckle. Do give this game a try to see if you enjoy monkeying around with your friends and family.