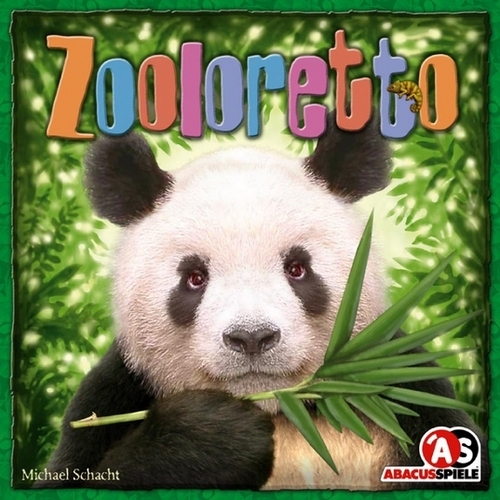 Zooloretto is a set collection game where players fill their zoos with animals.

Most tiles depict animals (up to 8 types, depending on the number of players) and the remainder depict coins or vending stalls. Some animals are denoted as male or female breeding stock, and owning one of each produces a baby animal. The tiles are “shuffled” and placed face-down in stacks, constituting a “draw pile”.

On a turn, a player has three choices: draft a tile (placing it on a delivery truck), take a truck or pay for a special action:

The game ends when there are fewer than 15 face-down tiles left at the end of any round.

Players score points if at the end of the game, their pens are full or almost full (only one empty space). Vending stalls allow part-scoring of pens with fewer animals. Bonus points are scored for owning a variety of vending stalls. Points are lost if there are animals in the barn.

The theme appeals to pre-school children, but the subtleties of the game are better appreciated by more mature players. It is often, but not always, advantageous to choose a truck with two or three tiles rather than seizing single tiles, but this requires patience and judgment (particularly, estimating whether an opponent is likely to take the truck before you do).

My son (five-and-a-half years old) enjoys this game, but the complexity and length of the game are a bit beyond my daughter (four years old). It is a great choice for introducing players who are new to gaming. There are several expansions for the game (I have not tried any of these) and also an iPhone app.