The Nintendo Wii brought two things to the table that other game consoles did not.  First, a game system that actually required you to get off your duff.  Second, an interface that both Great Grandma and Toddler Tom could figure out without having any previous experience with other game systems.  It is for these two reasons I was able to convince my wife that the Wii was an absolute must for our small family as it would not only reinvent the gaming experience as we knew it, but also promote health and interaction.

Having successfully pitched the Wii, we went out, purchased  it, played it for about 2 months, and then forgot all about it.  The Xbox 360’s siren call was too strong to resist…

Skip ahead a number of years, and we have a new batch of family members to introduce to the wonderful world of video games.  Most of my 360 games are not what I would consider “kid friendly” for reasons of their subject matter, level of difficulty, and time spent needed to play.  The lonely and all but forgotten Wii suddenly had an opportunity to come off the back shelf and entertain again.

To date, the only game my two oldest sons really enjoy is Wii Sports.  The simple mechanics and required physical moves are all very intuitive making the learning curve slight.  You’d think that would be a winning recipe for hours of fun, but you would be wrong.  Let’s take a look at the following graph. 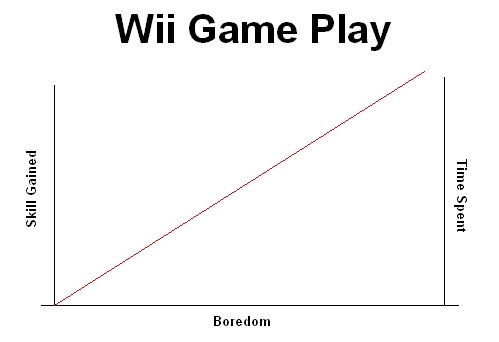 As you can see, the amount of skill gained is directly proportional to the time spent; however,  so is the level of boredom.  This is especially true for a 6 and 3 year old with a combined attention span just shy of 2 meters.

Everything is going smashingly. The boys have the moves down and are doing exceptionally well at Wii Sports Bowling. 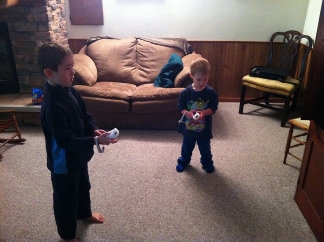 Nyhus, age 3, looses interest and sits down to read a book.  When asked if he wants to play, he responds by making a face, grunting, and dramatically flipping a page in his book to emphasis his disinterest and disgust. 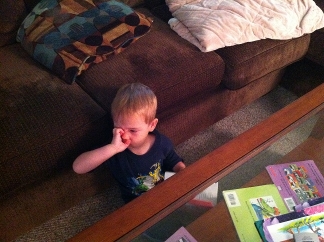 Both boys have no further interest in the video game and have taken up position on the couch to read a comic book together.  Liam, age 6, helps his brother understand the more complicated subplots in the Spider-Man comic. 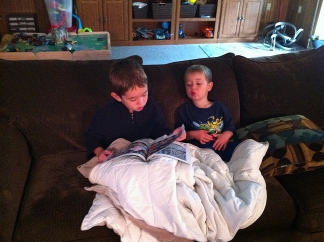 Once again, the Wii has lost love.  In the background, you can hear the sweet, sweet call of Halo Reach beckoning us…