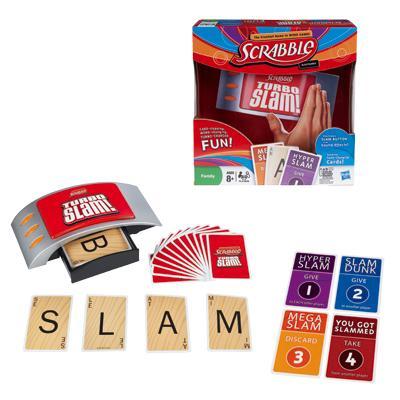 In Scrabble Turbo Slam, all the players compete to be the fastest word wiz by playing their cards down to create new four letter words. Game play is fast and fierce and made even more so by the random Turbo Slam that will allow the first player to slam the button to collect a special action card that might or might not be helpful. Get ready to read fast and spell faster! The first player to play all their cards wins!

Scrabble Turbo Slam is comprised of 55 Letter Cards and 12 Action cards for a total of 67 cards. The Letter Cards are double-sided with a letter or a blank on each side. For easy reference, the letters on the card, both front and back, are identified in the top left corner of the card. A blank Letter Card can represent any letter.

There are four different Action Cards. They are as follows:

The unit itself is made of  solid plastic and is durable. It will take a lot of slamming and still be playable. All the cards are easy to read and are sturdy and thick, which is a very good thing as the players are going to slam, throw, toss, and grab at the cards for the entire game. All in all, the game components are solid and of high quality.

One of the players should spell a four letter word using the Letter Cards and place them in the correct order, side-by-side, and in the middle of the table. This is the starting word for the game. The rest of the Letter Cards are now shuffled and all the cards are dealt to the remaining players. It is not explicitly said in the rules, but all the players should have the same number of cards. Any extra cards should be immediately put in the discard pile.

The game is now ready to play! 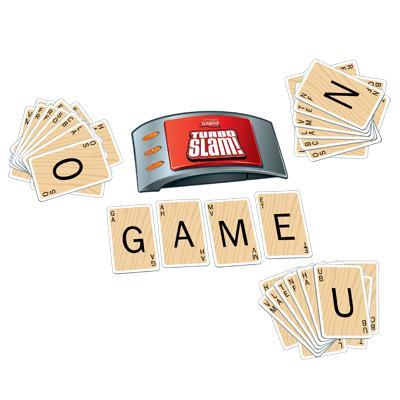 Example of a 3-player game set up

To start the game, a player taps the Turbo Slam button. A “DING-DING!” sound is played and signifies the game has now started. In no particular order, the players begin to lay down their cards in their hand to create different four-letter words using the starting four-letter word. Letter Cards are played direction on top of any Letter Card on the table to create new words. Players can only play one card at a time on the word and must call out the word they care creating. For example, if a player wants to play the “F” Letter Card on the “G” Letter Card of the word “GAME”, they shout “Fame!” and then replace the “G” with the “F” card. A new word must be created each time, but the same word can be repeated again and again as long as there is a different word between each iteration.

At anytime a player creates a word that is a proper noun (a name, for example), an acronym, a foreign word, or a word that simply isn’t (like “ftpo”, for example), any other player can hit the pause button on the Turbo Slam unit and declare a challenge. Once the game is paused, everyone stops playing until there is an agreement at the table in regards to the word being challenged. If the word is OK’ed by the majority, the pause button is hit again and the game continues. If the word is found by the majority to be incorrect based on the rules, the player who played the last card (and created the challenged word) takes back that card, the pause button is hit again, and play continues.

Game continues until one player plays their last card. They declare victory and push the victory button located on the Turbo Slam unit. The player is welcome to dance to the fanfare if they so choose.

I have played the non-electronic version of this game, Scrabble Slam, and found it to be a pleasant diversion for people who had a good grasp of the English language and spelling. Because of this, I doubt very much my oldest little geek is going to enjoy it. I’m not even going to bother to try to teach this game to my middle little geek as he simply isn’t a strong enough speller to compete. My oldest little geek is, but the game’s demand for quick spelling will cause more stress than fun.

Regardless of my gut feeling, I pitched the game to my oldest little geek. As expected, he found the game highly suspect. At my house, we continue to learn our letters and numbers even while on Summer Break. This game sounded like more school work to him, even though I said otherwise. After some coaxing from me, he relented and I taught him the game. I went through several examples of how the game was played, explained the Turbo Slam unit and the Action Cards. Once he demonstrated to me he understood how the game was played, I set up the game. While doing so, I asked him his thoughts so far.

“This game looks like school work. I like how you have to play fast and you get to slam the button, but I don’t like the spelling part.” ~ Liam (age 7)

Uh-oh. Doesn’t like the “spelling part”? This does not bode well for the game, ladies and gentlemen.

Word games are a tricky. The classic is Scrabble, wherein players build words off of words for points. From there, word games use different methods of play, but it always comes back to the player needing to have a large vocabulary and a descent spelling skills. These come with time, to be certain, but games that required specific skills make it hard to play with a mixed crowd. A parent will always have a significant advantage over a child and a person who speaks English fluently will always have a an advantage over a person who speaks English as a second language.

It is for this reason that anyone who wants to play Scrabble Turbo Slam must first take into account who is playing. Most games can be taught, the system explained, and the game provides the tools for the players to work with it. Word games, like Scrabble Turbo Slam, provide the medium and the rules, but none of the tools. Those must be brought to the table by the player. If a player is a tool short, they are immediately at a serious disadvantage.

This game did not go over well with my little geek. The fast speed of the game and his level of spelling made the experience stressful. Instead of having fun, his level of frustration grew as he tried to take his time to find words and play the correct card. As soon as he found a word, more times than not the word had already changed. It only took one game and he was done.

And really, I don’t blame him. A 7-year-old versus a 35-year-old in a fast-paced spelling game does not really have much of a chance. But this fact does not nor should put the game in a negative light. Far from it, in fact. Scrabble Turbo Slam is a fast game that will make players work for their victory. The level of energy you have to put into the game is equal to the ability of the other players around you. If you play this game with peers that are more or less at your same level, you are going to have a real race on your hands.

A Gamer Geek is not going to enjoy this game. The game is fairly straight forward, has no tactics or strategy, and the constant changing randomness does not allow for any type of “plan” other than to simply play faster than the other players.

A Parent Geek is going to have a fun time with this game, especially as their little geeks grow up and obtain stronger spelling and verbal skills. This is also one of those rare games what will increase its level of competition as the little geeks grow older. The more they know, the stronger players they will be.

A Child Geek is not going to like this game, either. At least, not at first. The “fun factor” is dramatically reduced by the demanding level of spelling and speed. Until they feel more comfortable with their spelling and verbal skills, have a rich vocabulary to use, and have the confidence and speed to spell fast, Scrabble Turbo Slam is going to be left on the shelf to collect dust.

Scrabble Turbo Slam is a fun party and family game, but only if all the players are at the same level. If played with the right group, it will challenge, entertaining, and thrill the players as they race to be the first to play their last card.