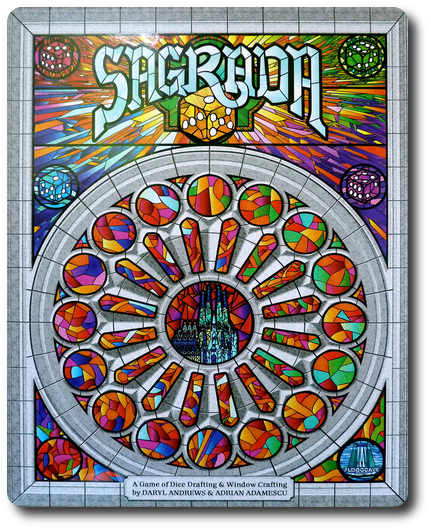 The Sagrada Família is a large Roman Catholic church is Spain that began construction in 1882. To date, it’s not yet complete and for good reason. The project has suffered missteps, political problems, financial issues, and even a fire. Throughout it all, the building remained and grew, becoming a breathtaking example of Gothic architecture with beautiful stained glass windows. Now you have an opportunity to participate in its construction. 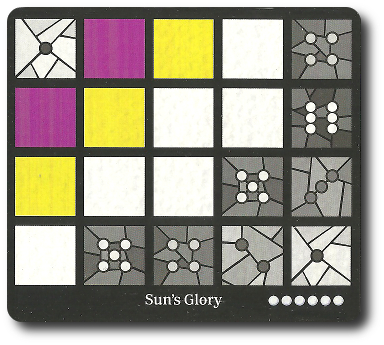 Fourth, place the Round Track/Score Track board in the center of the game playing area with the Round Track side face-up. Place a Score marker for each player next to the track.

Fifth, shuffle the Tool cards and deal 3 face-up in the center of the playing area. Place the remaining Tool cards back in the game box.

Seventh, place all 90 dice in the dice bag and mix them up.

That’s it for game set up. Determine who will be the first player and give them the dice bag.

Of Color and Light

Sagrada is played in rounds and turns for a total of 10 rounds per game. A game round is summarized here.

The dice are now rolled to create the Draft Pool.

Starting with the first player and continuing in turn order sequence, each player will take a turn completing two actions in any order they determine to be best. Both actions are optional, meaning the player can take two, one, or no actions on their turn. The actions are as follows:

Action One: Select One Die

The player may select any die from the Draft Pool they like. When taken, the number value rolled cannot be changed. The die is immediately placed in the player’s Window Frame player board. The first die to be placed must be placed on any of the window frame’s edges or corners. The second and subsequent dice must be placed diagonally or orthogonally to previously placed dice in the window frame. The newly placed die must match the color or shade of the window frame space as indicated by the Window Pattern card (white spaces mean no restrictions). For example, a blue space on the Window Pattern card can only be used by a blue die (of any number value) and a space that shows a “3” can only be used by a die with the value of a rolled “3” (with any color). The last rule is that a die may never be placed orthogonally adjacent to a die of the same color or the same number value. For example, two blue dice cannot be next to each and two dice with the same number value cannot be next to each other.

If a player is ever found to have placed a die or dice incorrectly, they must immediately correct the errors by removing as many dice as necessary until their Window Frame player board is no longer found to be incorrect. Removed dice are not returned to the Draft Pool. Instead, they are out of play for the duration of the game.

Action Two: Use One Tool Card 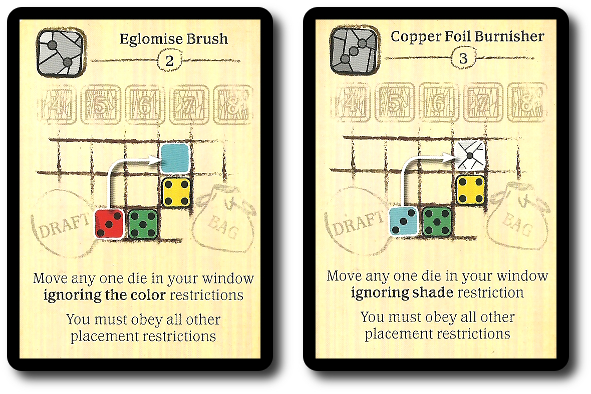 Step 4: End of Round

The dice bag is then passed to the next player in turn order sequence and a new round begins as noted above.

The game ends when the 10th and final round is completed. All the dice on the Round Track are cleared and the Round Track is turned over to the Score Track side. The player’s Score markers are now used to track the points earned during the game. Points are earned as follows: 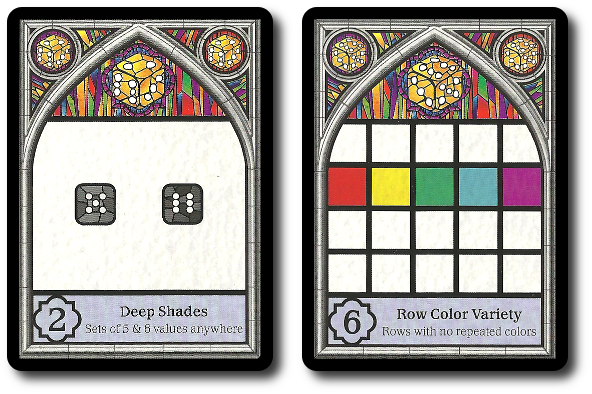 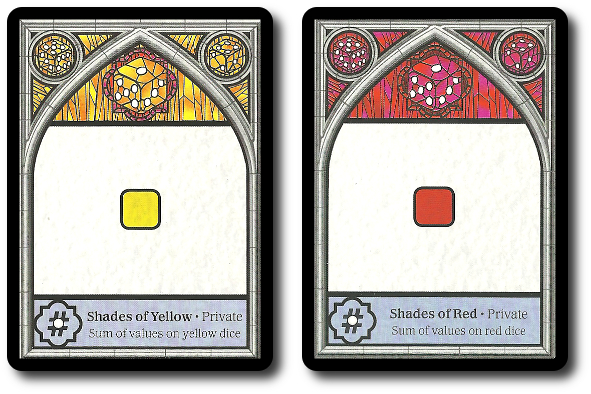 Players earn one additional point per Favor token they still have in their possession.

The players add up all their points and the player with the most points wins the game.

Sagrada can be played as a solitaire game. Instead of attempting to beat the score of your opponents, the goal is to beat a fixed target score. The target score is determined by the total sum of the dice placed on the Round Track. As such, it behooves a player to always select the dice with the highest number value whenever possible. Additional changes include the use of Tool cards and the total number of objectives that are available. This makes for a very challenging game.

To learn more about Sagrada, visit the game’s web page.

The Child Geeks, who are always ready to roll some dice, jumped right in and took to the game immediately. As one Child Geek put it, “I love how the dice fit on your board and how colorful everything looks.” The game was found to be very aesthetically pleasing, as well as fun. The only problems we ever had were when one player took the dice another player wanted or needed. But to be fair, a gamer is never left without options. According to one Child Geek, “This is a puzzle that you can solve different ways.” Very well put, but also a bit misleading. Players gain points by building their stained glass correctly, but how they go about that task is open to different approaches. This means a player is never left empty-handed, but the value returned for each action taken on their turn is always different. Which really meant nothing to the Child Geeks, as they were too busy having fun to care. When all the windows were made, all the Child Geeks voted to approve Sagrada.

The Parent Geeks found Sagrada to be a perfect combination of casual game playing and puzzle solving. They liked how each player’s main goal was to complete their own individual puzzle, but the element of competitiveness drove the would be puzzle solver to take risks. According to one Parent Geek, “The game gives you a blueprint to follow. From there, it steps back and lets the player do what they think is best. I like that.” The game gives each player an excellent base on which to build their strategy, but that’s it. From the very first moment the game begins, the player is on their own to make their own choices. What many Parent Geeks found to be exceptional is that the game, no matter how hard you think your puzzle is, always finds a way to get you back on course. “The game wants you to win,” said a Parent Geek. This sentiment was shared by all our Parent Geeks resulting in a very positive endorsement.

The Gamer Geeks felt that Sagrada was pretty to look at, but were not of the same mind when it came to the game play. According to one Gamer Geek, “This is essentially a solo puzzle that injects competitive game play via a shared and limited resource. Not bad, but I want to make sure we are all seeing the same thing here.” Another Gamer Geek said, “The game is lighter than I would like, but it moves along at a good clip and I can tell it has a lot of replay value since everything is randomized.” A few of the Gamer Geeks found Sagrada to be flat out boring, but the majority felt that the game was light enough to be a filler and had enough depth to keep them interested. A few even suggested it was the best puzzle game they had played, since it had elements of drafting components (in this case, dice). In the end, the Gamer Geeks were generally pleased but stopped short of saying Sagrada was a “great game”. Instead, they opted to suggest it was “pretty good”, which is a Minnesota way of suggesting the game was enjoyable in a non-threatening and general kind of way. The Gamer Geeks voted to approve Sagrada.

The only gamers who are going to have a hard time with Sagrada are those who are colorblind. If you have difficulty matching colors on the Window Pattern cards to the available dice, you are out of luck. Everyone else should have a good time, if that individual enjoys a good puzzle. Sagrada is first and foremost a puzzle game. That’s why it’s so easy to play alone. When you add in the competitive element and the very real possibility that the dice you want might be taken from you, the game takes an interesting turn. Imagine, if you will, that you are attempting to complete a 200 piece puzzle. Not a daunting task, but if a piece of that puzzle were to go missing each time you selected a piece to use, the act of puzzle solving turns into a different exercise altogether. No longer is the player promised all the pieces they need. When selecting a die, the player must take into account not only what is available to them, but also the importance. It’s very possible that an available die is the center piece of their puzzle. The trick is knowing it and claiming it in time.

Sagrada is easy to learn, with the hardest part of the game play being the rules to how the dice are placed. After that, the only hiccup a player will have is keeping their objectives in the proper order of severity. Players should expect their plans to go awry, but there are always alternative paths to take. Making use of the Tools is important and there is always enough information given to the players at the table to help them make informed choices. The game really does want you to win and have a good time. The only problem is, not everyone can win.

Due to just about everything in Sagrada being determined randomly, the game is different each time you play it. This gives the game a lot of longevity. Clocking in at about an hour (in most cases), Sagrada stays just long enough at the table to satisfy the gamer in you and promises to be a totally different game with new challenges the next time you get it to the table. That feels very rewarding, as you know that each time you play the game, a new challenge and experience is a very strong possibility.

Sagrada was found to be a “pretty good” game by the majority of our players and enjoyed by everyone except this one guy who I’m pretty sure hates all games by default. Unless you are like this curmudgeonous gamer with a surly temper and penchant for being grumpy, I have no doubt you’ll enjoy the game. It’s the perfect mix of puzzle solving, competitive game play, and beauty. Do try Sagrada when the opportunity presents itself.

One Response to Sagrada Game Review