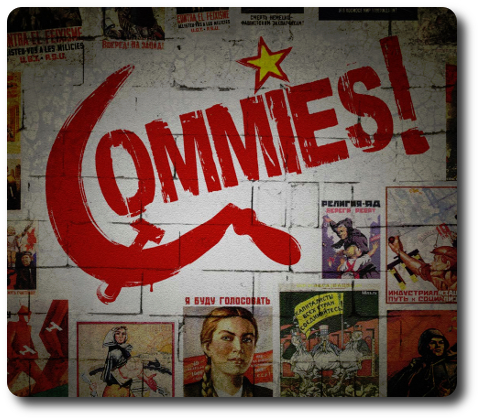 American publisher, philanthropist, and diplomat, Walter Annenberg, said “The greatest power is not money power, but political power.” In this game, power is given to you, but you must share it. This will not do. With the help of others, you might be able to take it all, but you are not the only one with big ambitions. You must work with others to obtain your goals, while at the same time helping others obtain theirs, to a point…

Commies!, designed by Stephen DeBaun and to be published by Trip West Games, will reportedly be comprised of 2 Faction cards, 7 Party ID cards, 28 Leader cards, 42 Power cards, 4 State cards, and 70 Supporter chips. As this is a review of a republished game, I cannot comment on the game component quality. But I will say this… Artist Adam Bain has done a fantastic job with the card layout, providing what would appear to be genuine communist political party propaganda posters with easy to read icons. It sparked the imagination of our players and had them looking at the cards, admiring the details, and commenting on what they saw. That being said, there are a few propaganda images that are blatantly anti-American, which is historically accurate, but might not be your cup of tea.

To set up the game, first have each player select a Party, and place the matching Party ID card and Leader card, placing the Party ID card in front of the player for all to see.

Second, take one Leader card from each player, shuffle, and deal them out in a row from left to right. This row is referred to as the “Party Tableau.” 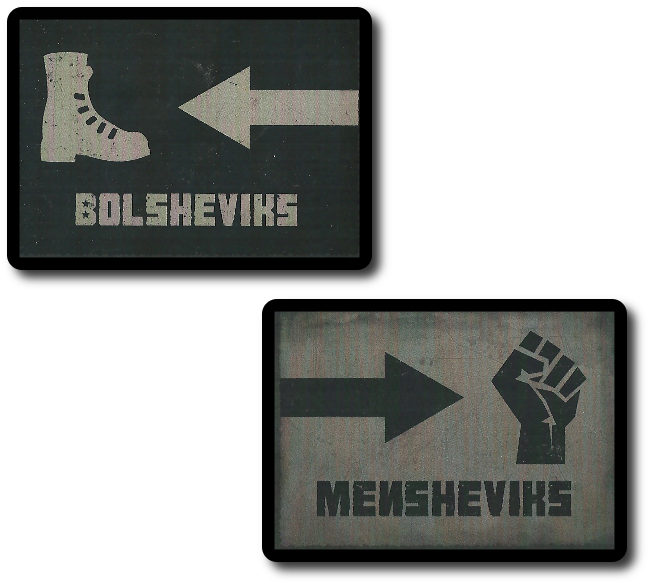 Fifth, give each player 10 Supporter tokens, placing any that remain off to one side of the game playing area. This pile is referred to as the “Treasury”.

That’s it for game set up. Decide who will go first and begin.

A Balance of Power

Commies! is played in “Plots”. Each plot consists of 5 rounds of game play. A single Plot is summarized.

Each player must place 1 Supporter chip in the “Treasury”. This is, thematically speaking, the collection of taxes. If any player cannot pay, the game ends.

Players now look at their hand and select 1 card to play face-down in front of them. The played cards are collected and shuffled.

One of the played cards is randomly selected and placed face-down next to the Party Tableau. These face-down secrets are collected in the “Secrets pile”.

The remaining played cards are now dealt face-up in a row and resolved one at a time. 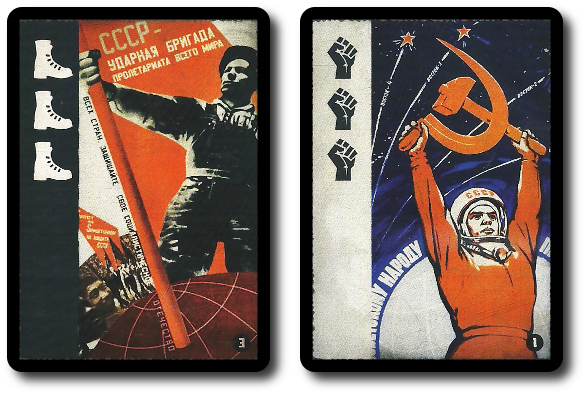 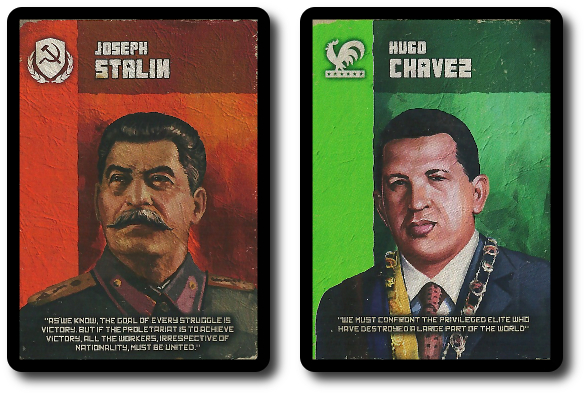 Step 5: Ending the Round and Starting a New One

This ends the round, of which there are total of 5 in a Plot. Repeat steps 2 through 4 five times.

Step 6: Reveal Secrets and Give Payoff

After the payoff, the Plot ends and a new Plot begins. The Party Tableau remains fixed. All but one Leader card of each type in the Party Tableau is collected and shuffled. In this way, each player’s Leader remains in its position and carries over to the next Plot.

Power to the People (or Just to You)

Victory goes to the top two players with the most Supporter chips on their Leader cards in a 4 and 5-player game and to the top three players in a 6 to 7-player game. Keep in mind that Commies! plays with the idea of a pseudo-parliamentary system. That is to say, the power lies in the hands of the winning party. In this case, coalitions are created with players supporting each other in hopes of obtaining victory through somewhat mutual means to a prosperous end. In this way, players are obliged to help their opponents, but only to a point. Help too much and the player might find that their enthusiastic peer is suddenly their ruling leader. It is, in short, a gamble.

To learn more about Commies!, visit the Kickstarter campaign.

The Child Geeks learned how to play the game, but not all of them really understood the game. Specifically, the aspect of the game play that required a bit of bluffing via semi-cooperative negotiation. You can only obtain power (and win the game) if you work with others, but you cannot appear to favor anyone or the rest of the group will gang up on you. Nor can you be seen as wishy-washy when it comes to allegiances, as no one will really trust you. According to one younger Child Geek, “I understand how to play, but I have no idea how to win. Everything keeps shifting, but I really don’t know how or why.” Another Child Geek said, “The only part of the game I don’t like is how little control you have over your cards.” But these statements were not found when we collected comments from the older Child Geeks. Not only did the more experienced and older Child Geeks play the game well, they understood the meta-game being played at the table. As one Child Geek put it, “The best part of this game is tricking others into thinking you have their back!” When all the reviews were in, Commies! received a mixed endorsement from our younger players.

The Parent Geeks, on the other hand, really enjoyed themselves. They found Commies! to not only be an interesting game of “give-and-take”, but a very entertaining exercise in bluffing. According to one Parent Geek, ‘This is the kind of party game I would play even if it wasn’t provided at a party. I really like how fast it plays and how, as a player, I am always in the game.” What downtime there is the game is more or less connected to the redistribution of the cards and general cleanup between plots. Other than that, the players are continually engaging with the game, either passively watching and plotting, or actively taking action to promote their agenda. As one Parent Geek put it, “A game like this requires you to pay attention not only to the cards on the table, but to the players around the table. You need to engage them and have them engage you, or you will have a very hard time winning the game.” All the Parent Geeks voted to approve Commies!

The Gamer Geeks also enjoyed themselves, finding Commies! to be a fun mix of bluffing, negotiation, and hand-management. According to one Gamer Geek, “I like this. The rules were a bit difficult to understand at first, but as soon as you start playing it, everything clicks.” Another Gamer Geek said, “I thought I would get tired of shifting the cards around constantly, but it isn’t that terrible. It’s actually very satisfying moving your stacks of cards around, watching the balance of power shift in front of you.” The Gamer Geeks also liked the betting element, as they moved chips around, keeping track of who had the ultimate power in the group. As one Gamer Geek put it, “This is a very easy way to visually demonstrate to everyone who needs to be taken down.” All the Gamer Geeks approved Commies!

Commies! does a great job of playing a subtle game of chicken. A player has to share power in order to get it, but how much power does one really need to share in order to get ahead? This is where it becomes important for players to keep close track of where they stand in the Party Tableau order. A friendly cooperative move to seize power from those above you can quickly turn into a power struggle with the very same people who helped you obtain the position in the first place. I really liked this, as it kept me engaged at all times, evaluating and re-evaluating the Party Tableau as cards were played and the balance of power shifted.

And while I greatly enjoyed the subtle way the game teased players into thinking twice before they played cards and trusted others, it feel a bit flat with the younger gamers. Casual players who were older or more experienced were able to see what the game was all about after a game or two. This was not the case for our younger players who became more and more exasperated as the game went on due to the fact that they never really caught on to how to control the power shifts. Or, at the very least, heavily influence them. This is and should not be seen as a fault in the game. Rather, it demonstrates that the game is best played with those who understand and can grasp the undercurrent of shifting alliances. Your friend is your enemy is your friend is a concept that can be difficult to understand and even more difficult to play to.

I very much enjoyed Commies! and look forward to seeing this game make it to my gaming table again. It felt just heavy enough to please the Gamer Geek in me, but was accessible enough to enjoy with the Parent Geeks and casual gamers. Unfortunately, Commies! was not enjoyed by the Child Geeks, but for reasons that make total sense. Do try Commies! when the opportunity presents itself. I think you’ll find this game lives up to its propaganda.