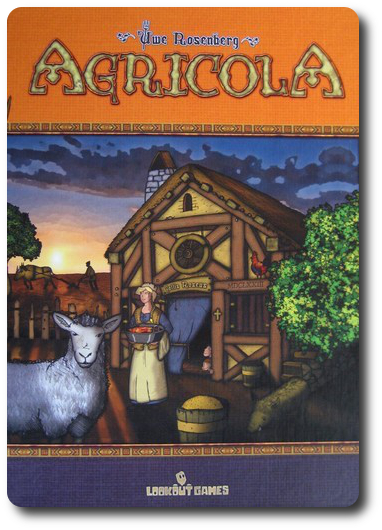 Agricola (Latin for “farmer”), designed by Uwe Rosenberg and published in English by Z-Man Games in 2008 (following the runaway success of the German edition published the previous year), is a thrill-a-minute worker placement game about farming. Okay, I admit that the theme itself is not the most exciting one, but if your little geek can play this game, then your child has the makings of a true Gamer Geek. And that is truly exciting!

Yes, you will need to organize this game.

A full explanation of the rules is beyond the scope of a brief review. This is not a game that can be explained in 5-minutes, even to hardcore gamers. You can read the full rules from the game’s official web page. Note that the game’s rules are rather long, but they do an excellent job of explaining the game in total detail. We suggest you read this review first, then if the game sounds interesting, dedicate an evening to read the rules in full. Consider this review something like reading the back of a book jacket.

Game setup, on the other hand, is very quick and is even simplified for a Family Game. Simple shuffle a few decks, put a few cards here, a few cards there, give everyone a little Food to start with, and away we go. In less than 5-minutes, you can be playing the game….if you organized it.

This is a relatively orthodox worker placement game. In clockwise order, players take actions from a common pool. Each action may only be taken once per round and allows the players to collect resources or to use these resources to develop their farms. Each player begins with two workers living in a wooden house with two rooms, with additional space available to develop one’s farm.

The resources in the game are represented by painted wooden tokens. They include:

Apart from collecting resources (which you will either eat or build with), other actions allow players to:

Harvests occur at the end of rounds 4, 7, 10, 12, 14 and 15. During a Harvest, grain and vegetables are reaped from the fields, animals are bred (gain one of any animal that you have at least 2 of, so long as you have space) and then any available food is eaten.

The standard game adds a layer of complexity through Occupation and Minor Improvement cards that give players additional ways in which to improve the efficiency of their farming operations.

The game ends after Round 15 and a final Harvest. Victory points are then scored based on how many rooms, family members, fields, pastures, stables, crops, and animals each player has. The player with the most points wins the game.

To learn more about Agricola and read the full rules, see the game’s official web page.

Agricola is unquestionably a “gamer’s game” (Ryan Sturm, of the How to Play Podcast, rates this a “Black Diamond” – a level of difficulty surpassed only by the “Double Black Diamond”), so it was with some misgivings that I decided to try this with my (then) 6-year-old son, a true gamer at heart but way below the recommended age level, and my wife who is not a gamer. My main concerns were, firstly, the introduction of a complex game too early could make a negative impression and spoil future experiences of this game for all of us, and secondly, that my 4-year-old daughter would have to amuse herself for at least an hour and a half, while the rest of us completed the game.

Holding my breath, I proceeded.

To my relief, this was a success with my family, although my concerns were well-founded. If anything, I had underestimated the appeal of the farming theme to young children. In retrospect, I should have known that both the pastoral and agricultural aspects would capture their imaginations. On the other hand, the challenge of formulating and implementing a long-term plan was just slightly beyond my son’s gaming abilities. It remains a fun game – for example, I have to adapt to his unexpected strategy – but less competitive than I would like.

Pleasingly, we are able to set up, play, and put away this game in just over an hour with 3 to 4-players. Having the various components sorted in a Plano box is a big help. My daughter even played with us a few times!

As my son’s reading skills flourished, I added in the Occupation and Minor Improvement cards and we played several 2-player games with these. While he still struggled to play competitively, he was ecstatic to be combining literacy with gaming – two activities that he enjoys thoroughly. Again, the scores were not that close, but I still felt that I was challenged and I enjoyed watching his understanding of the game develop over several plays. 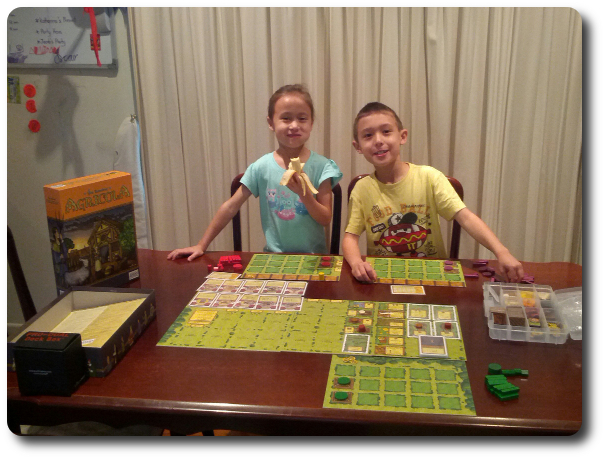 After such a good experience with the original Agricola, Rosenberg’s latest offering,  Agricola: All Creatures Great and Small, a 2-player game that focuses on raising farm animals, is near the top of my must-have list!