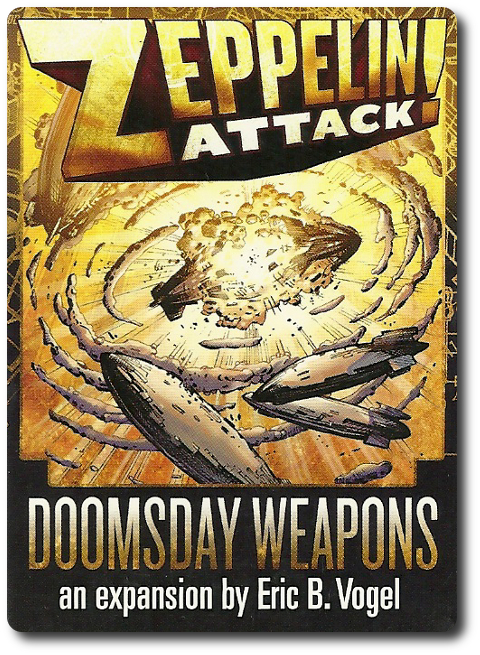 Countless experiments and failures have finally resulted in success. You now have a weapon of incredible destructive power that will ensure your superiority in the skies. But what’s this? A message has arrived that states your nemesis has a new experimental weapon, too? How could this be? Spies! Yes, of course! You think it’s time to find this spy and conduct some “live fire” exercises with your new weapon.

Zeppelin Attack! Doomsday Weapons can be added directly to the base game. A small icon that represents a beaker identifies which cards belong to the expansion if you should ever need to remove them. The majority of the expansion uses the same rules as the base game with the only difference being the new effects the cards provide.

When setting up the game, place the Mercenary cards in the appropriate piles according to their type. The Science Zeppelin cards will form a new draw pile bringing the total number of Mercenary draw piles to 6.

These new airships provide the player with unique Special Effects and a lot of Victory Points, much like the player’s Experimental Zeppelin. The Science Zeppelins are not rigged for combat, however. Players can only play Defense cards to these airships, which they will most likely do often. Science Zeppelins can very quickly give the player the upper hand in the game, making them a likely target for attacks. 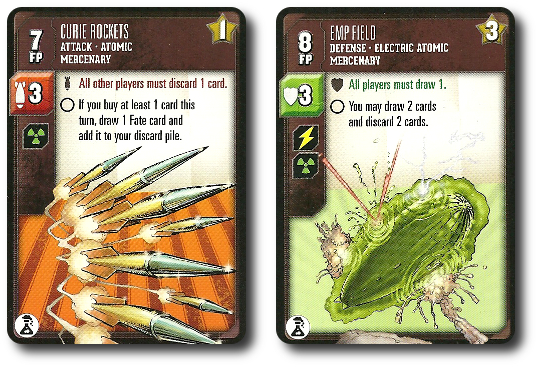 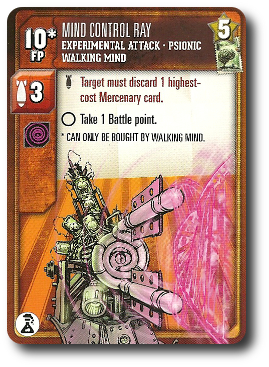 The End of Everything

The endgame is triggered when 2 of the Mercenary draw piles (not 3) are depleted. The round is finished and Victory Points are counted as normal. The player with the most Victory Points wins.

This is a small expansion, coming in under 50 cards, and the majority of the cards don’t provide much in the way that is new. One could easily dismiss this expansion if it weren’t for the fact that it includes the new Science Zeppelins. While the Experimental Weapons and new Atomic Attack and Defense types are interesting, they were not significantly unique enough to excite our players. Indeed, these cards were slipped into the game and little was said about them. Additionally, players tended to focus more on their Experimental Zeppelin, rather than their Experimental Attack.

Another change the expansion brought to the gaming table that all agreed was an excellent addition was the new endgame condition. At first, the reduced number of depleted decks from 3 to 2 had a few players concerned. One Gamer Geek said, “This rule change will most likely make the game end too soon, which may or may not be a bad thing.” Turns out it didn’t. With more cards being added to all the base game Mercenary draw piles and the new Science Zeppelin draw pile, players had more to purchase. The overall inventory was depleted in the same amount of time as it would be in the base game. This came as a surprised to all and one that everyone appreciated.

Unfortunately, the game still feels like it’s short on cards and lacks variety. Certainly, this expansion provides more for the players to use and to worry about, but not enough to make each game feel unique. Players are still drawing the cards and playing the game the same way. The only thing that changed is the subtle differences in effects. That’s not enough to make the game feel expanded. Added to, you bet, but not bigger or better.

As such, all our groups were mixed about the expansion. Everyone agreed it was “pretty much OK”. Not great, not bad, and not necessary, but worth playing with. “More of the same” was a phrase I heard often, despite the new airships and weapons. What little variety the expansion provided was lost in the shuffle of the cards.

This expansion fell short of satisfying our players who wanted more variety in their game. What they saw in the expansion gave them hope that the game designer will continue to add to the game and make it as epic as the battles it illustrates. I wish the same, but think we are a long ways off. Until then, the base game and this expansion are still fun to play and easy to teach. Adding the expansion might not have taken Zeppelin Attack! to the next level, but everyone agreed it was an expansion worth grabbing. If you are a fan of Zeppelin Attack!, do look into this expansion.