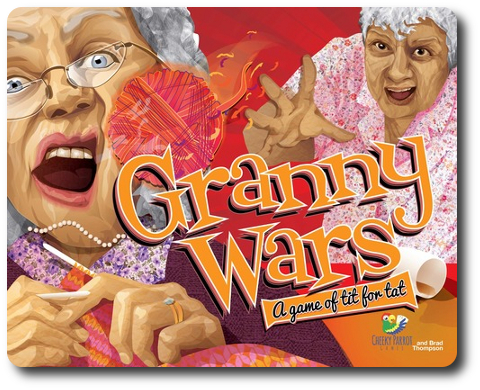 You love your grandma and would do anything for her. When she came to you, expressing concern about other senior rivals, you began a campaign of subterfuge and sabotage on her behalf. It has been working well, but you now realize that other children and grandchildren are waging their own private campaigns. The streets of the retirement community are filled with suspicion. The grannies are at war, and no one is getting milk or cookies until the battle is resolved!

Granny Wars, designed by Amanda Milne, Julia Schiller, Brad Thompson and published by Cheeky Parrot Games, is comprised of 8 Score cards, 8 Loyalty cards, 50 Victory Point cards, and 14 Senior Gold cards. The cards are as thick and as durable as your standing playing card. The illustrations by Kuan-Sheng Hsu are bright and detailed, giving each character on the card a distinct look. Some of the people portrayed on the cards might actually be someone’s grandma or grandpa. Which would be pretty cool and weird at the same time. 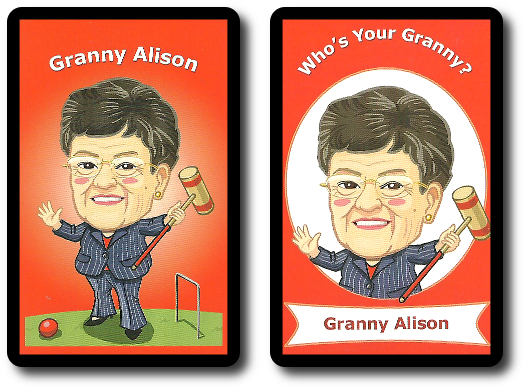 Second, collect the Score cards and place them face-up in the middle of the playing area in a circle where all the players can reach them. Each Score card will have cards placed on them referred to as “Score piles”.

Third, shuffle the Loyalty cards and deal 1 to each player, face-down. Return any extra Loyalty cards not dealt back to the box without showing any of the players. Players should look at their Loyalty card, but keep it hidden from their opponents. The matching face-up Score card is the player’s secret Score pile. Place the Loyalty card face-down and to one side for now.

That’s it for game set up. Determine who the first player will be and begin. Time to take care of business, Old School style!

Granny Wars is played in turns. On a player’s turn, they play 1 card from their hand to any Score pile in the circle, face-up. There are two types of cards available to the player. 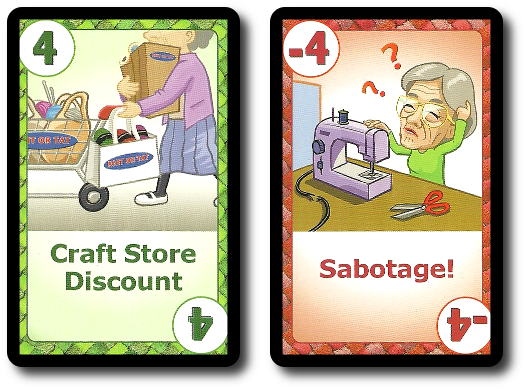 Senior Gold cards also provide positive and negative points, including zero points. They also include a special “Senior Power” that is triggered when the card is played. For example, playing another card to a Score pile during the player’s turn.

After the player has played at least 1 card (or more, based on what cards they used), their turn is over and the next player in turn order sequence now goes.

Time for a Nap

The game continues until everyone is out of cards to play. Then the players reveal their Loyalty cards and take their matching Score pile. Points are now calculated. I suggest you put all the positive points in one pile, put all the negative points in another, and then subtract the negative from the positive values. The player with the most points wins the game! If there is a tie, the player with the fewest cards in their Score pile wins.

The Child Geeks had no problems understanding and getting into the game. They quickly learned that placing positive points on a specific Score pile quickly gave their opponents more information than they wanted. According to one Child Geek, “I suggest all new players be as sneaky as possible about points. You don’t want others to know which granny is yours.” The Child Geeks eventually learned that the best approach to winning the game was to do it as quietly as possible, misleading opponents into thinking certain Score piles were theirs, and saving their best cards for last. Another Child Geek said, “If you want to play really well, you need to do a lot of easy math in your head. That way you can keep track of which Score pile is currently winning.” When the games were over, the Child Geeks all agreed that the game was fun and approved it. 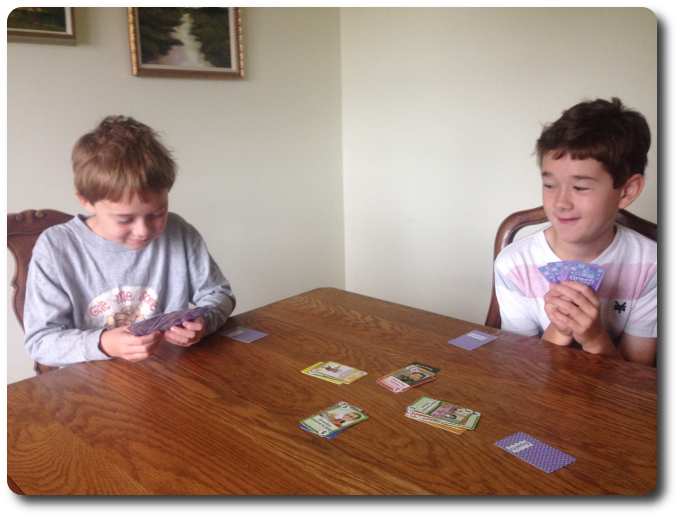 A Child Geek excitedly informs the table that he “knows who everyone is”. Everyone doubts it.

The Parent Geeks found the game to be either entertaining or just so-so. As one Parent Geek put it, “There isn’t much to this game. You can’t play it with your eyes closed, but you don’t have to put a lot of thought into it, either.” All the Parent Geeks liked how the game slowly built up the tension as the players’ hands began to dwindle, triggering the end of the game. They also liked how you could Bounce cards. The game was found to be exceptionally casual, with easy rules, and quick turns, but lacked the kind of depth of play the more skilled Parent Geeks enjoyed. According to one such Parent Geek, “A good enough game, I suppose, but one that I didn’t find all that engaging.” The end result was a mixed vote from the Parent Geeks. Those looking for casual games and the non-gamers all gave Granny Wars their full approval, while the more “serious” Parent Geeks gave it a pass.

The Gamer Geeks did not care for Granny Wars. They found it to be a game lacking any depth or real game play. According to one Gamer Geek, “I don’t need to care who owns what Score pile. I just need to make sure mine has the most points at the end of the game. All this secrecy is unnecessary.” Another Gamer Geek said, “I think this game would do well with casual gamers and for families, but for anyone who really enjoys games with depth of play, strategy, tactics, and critical thinking, they are going to be very disappointed with these old ladies.” None of the Gamer Geeks enjoyed the game, deciding it was a game never designed with them in mind.

Granny Wars is not a bad game, but it’s a simple one. Unfortunately, too many people incorrectly associate simplicity with inferiority. If the game is simple, it must be a bad one, right? Not necessarily. Such a statement is highly subjective and doesn’t take into account that not every game put on the table needs to be a brain burner. Granny Wars will challenge the players to consider where to put their cards and to contemplate the timing of cards played. But that’s it. Everything else is either guess-work or follow through, leaving the player a great deal of time to converse with their fellow gamers. Which makes Granny Wars a very casual game. Its short length of play makes it perfect for  those occasions where a quick game is asked for with a mixed group of players. Granny Wars can be played by anyone, but not everyone is going to like it.

I found the game to be so-so at best. I liked how it was played, but the game never thrilled or challenged me. When I won, I was pretty sure it was because other players weren’t paying attention. When I lost, I know they were. This is a game you can win by being smarter than your opponents. You need to be as quiet as possible, distract them, and redirect any and all attention to other Score piles. Of course, everyone is doing the same thing, which makes the gaming table fairly aggressive at times. Everyone will be friends when the game starts and passive aggressive enemies at the end. It keeps the game interesting, but the game play is always light.

If you are looking for a game where keeping your cool and a low profile are necessary, where quick calculations are a must, and playing the right card at just the right time will make all the difference, do take a look at Granny Wars. It’s not an epic battle, but the skirmish it produces is enough to keep you engaged.