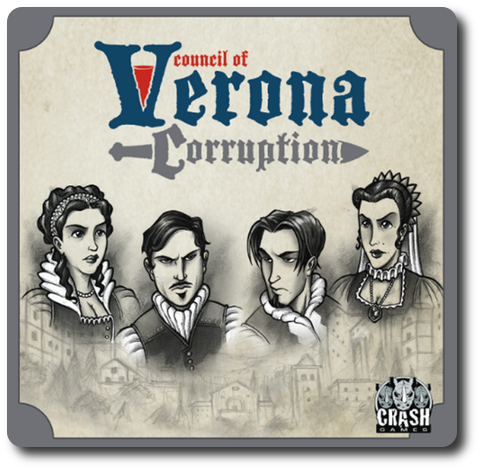 French author and a soldier in World War I, Georges Bernanos, said “The first sign of corruption in a society that is still alive is that the end justifies the means.” But what if the end is believed to be righteous even though the means may seem unjust? History is written by those who survive to write it, trumping opposing opinions in the process. In this game, corrupting others is essential to victory.

Council of Verona: Corruption, designed by Patrick Nickell, Michael Eskue and published by Crash Games, is comprised of 21 Corruption cards and 1 cloth bag. The cards are durable and as thick as your standard playing card. This is an expansion to Council of Verona, which is required to play.

The Corruption That Dwells Within Us

Note: We will not discuss how to set up and play the base game, Council of Verona. Read our review of the base game for full details on how the game is played, won, and enjoyed.

These Corruption cards are placed below and move with Character cards. They will either add an additional Influence slot or a rule that changes how the Character card is played or scored. Once played, they remain until the game is over. 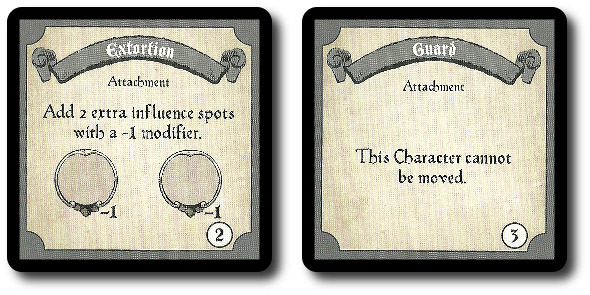 These Corruption cards provide the player with a one time special action. Timing is important if the player is to maximize the card’s effects and benefits. 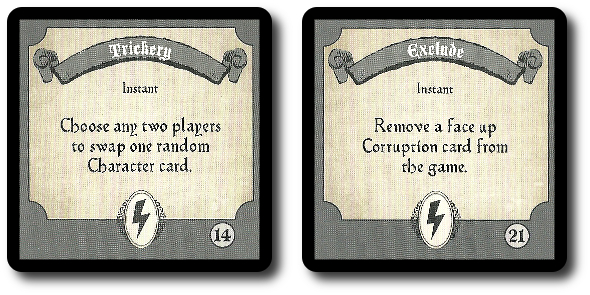 Oh, What Scandal, What Deception!

At anytime during the player’s turn, they have the option to play 1 Corruption card. There are several ways a player can use their corruption card beyond the effect it lists. It’s also worth noting that any number of Corruption cards can be played to a single Character card.

Bluffing is a vital component to the game play, as players must secretly back and back stab the Character cards. To further shroud the player’s objective, a Corruption card can be played face-down to a Character card as if it was an Attachment card. Which it might very well be, but it could also be an Instant Action card. The intent is to bluff the other opponents into thinking that the Corruption card played is or is not what the player wants them to think. Face-down Corruption cards are only revealed at the end of the game. If the effect of the card is applicable, it’s resolved. If not, the effect of simply bluffing that something of value was under the card was worth the effort.

May the Best of Us Rise to Our Place

Scoring the game is a bit more complicated with the Corruption cards in play, since they change the normal rules and add conditional statements or Influence slots. In all cases, each Character card should be scored separately and the totals recorded for the round for each player. When the game is over, the player with the most points wins.

To learn more about Council of Verona: Corruption, visit the publisher’s website.

The goal of any expansion should be to elevate the base game to a new height and offer players an opportunity to explore new means of play without requiring a lot of new rules to be learned in the process. In short, expansions should, in my opinion, truly expand the game’s depth, strategy, tactics, and most importantly, fun. Not just add more “stuff” or fix an issue in the base game. Council of Verona: Corruption is an excellent example of a game expansion that does it right. It takes the base game, gives it a boost, and never once demands a great deal more from the players.

Let’s focus on the specifics, as colorful gushing is not new in the world of gaming enthusiast, but nor is it helpful. First, this expansion will not magically make anyone who does not like Council of Verona suddenly fall in love with it. It’s not that kind of expansion. Second, this expansion adds a new layer of bluffing and manipulation to the game, providing players an additional means of either sneaking in points or screwing up an opponent. Third, and most importantly, the expansion does not add more time to the game other than that which comes by default from thinking which cards to play and counting points. The expansion will most likely also make a few players pause a few seconds longer than they would otherwise when they attempt to consider the implications of face-down Corruption card in play.

Several of our players, the Gamer Geeks specifically, were not sure the expansion was necessary. This is a common question asked by many when a new expansion is offered for the game and its impact on the overall game play is not strongly felt. In this case, I would argue that Council of Verona: Corruption is doing it right. It fits seamlessly into the game and the game play, becoming a natural extension of the player’s strategic and tactical game play. It doesn’t feel like it’s adding much because it dissolves into the game’s background. It’s when you score points you realize how influential the Corruption cards truly are. All it takes is 1 point more than an opponent to beat them. With the Corruption cards, you can win the game by several points and your opponents will never see it coming.

Council of Verona remains one of my favorite Bluffing games. It’s light and strategic, the depth of game play is always surprising, and it has always left me feeling satisfied. This new expansion, Council of Verona: Corruption adds a new layer without adding new burden. It further emphasizes to the player’s the power of subtle manipulation, strategic timing, and tactical table talk that all serves to distract and smoke screen a player’s objective. If you are a fan of the original game, I am certain this game expansion will be a welcome and enjoyable addition.