5 Myths Keeping You From the Board Game Hobby 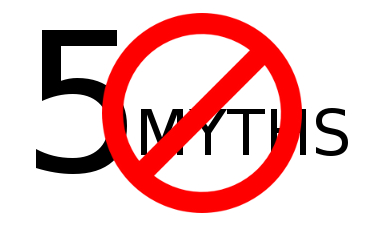 When I first started getting back into board games in the early 1990’s (which sounds like a very long time ago – sadly), I felt overwhelmed by the sheer number and variety of games available. The interweb was not up to speed yet in regards to selling games, so everything had to be purchased at the friendly local game store. There, thanks to excellent customer service and folks dedication to the hobby, I was introduced to new games by the helpful store staff. Today, the interweb has more online stores that anyone cares to count and there are still people happy to help you, who can now be found in a store or a forum. Even so, there might still be a few doubts in your mind. Let’s debunk 5 common myths to get you on the road to gaming awesomeness.

Now before you get all hot and bothered by our list, keep in mind that there are – of course – more than 5 reasons. I’m certain that a worrisome person can name a list a mile long. Honestly, I’ve got other things to do and 5 items fits within my schedule. It’s called time management, people.

#1: Games Are Hard to Learn

While the statement is fairly subjective, the fact is that most games are very easy to pick up. And by “easy”, I mean it’s more difficult to fill out your tax form than learn how to play any game of your choice. The key to learning games is figuring out how you best learn anything new.

To learn a game, all you really need is time and the determination to do so. From there, you can learn how to play the game anyway you like. Game publishers and designers want you to play their game. They’ll do all that they can to make sure that happens as quickly and as painlessly as possible.

That, my friend, all depends on the game. There are games that only require 1 player (commonly referred to as Solitaire games) and games that can accommodate as many people as you have in the room (commonly referred to as Party games). There are even websites dedicated to discussing games for couples (just search for “Games for Two” – careful what you click), if you are looking for a game you can play with your partner or friend. Sometimes they are both (lucky).

Almost all games can comfortably be played with 2 or more players, with the upper limits being determined by the game itself. You’ll find many games  with an indicator on their box that suggests as few as 2 people or as many as 6 people can play. This 2 to 6 player range is common in the gaming industry, as well as the 2 to 4 player range. Games will also come out with expansions that allow even more players to site down and play.

If you want to play a game, there is a game available for you to play right now. Doesn’t matter how many people you have or even how much free time. Games not only cater to different themes and narratives, but to people, places, and availability.

#3: Games Are Hard to Learn About and Find

Once upon a time, that was true. I remember going to Gen Con when I was only 11-years-old and being absolutely amazed at all the games I had never heard of. Thanks to the interweb, email, conventions, and word of mouth, it’s seldom that a game goes under the radar. In fact, we have the opposite problem now. Instead of not being able to find information, we are flooded by it. The most intimidating question someone will ask you when you first start getting into the hobby is “What kind of games do you like to play?” Truthfully, you will most likely find certain kind of games more entertaining than others, but the correct answer to such a question is “Everything. What do you have to play?”

Games are not hard to learn about. What’s hard is making the time to navigate all the information that is available until you get to what you really want. This becomes much easier as you gain experience and get to know what kinds of games tickle your fancy. Until then, don’t stress yourself out by trying to learn it all. I suggest you play 1 game, think hard about what you like or don’t like about it, and then find another game that doesn’t have what you dislike. As you progress, you’ll obtain a lot of experience and learn what you enjoy.

Which is great, but now what? The next step is to find those games. Games have been categorized by their mechanics and theme for a long time. If you go to Board Game Geek, you’ll be able to explore hundreds of games by their game play styles and the thematic story they cover. Once you find a game that looks interesting, you can go visit your friendly local game store who will order it for you, order it online, or ask around to see who has the game already.

What might sound like work is nothing more than exploration. Each time you play a game you’ll learn more about it and about you. The best teacher is experience and a guy named Mr. Samson who taught my 6 grade science class.

Again, this is a fairly subjective statement (we all have our own financial restraints), but I can truthfully say that some games will hit your bank account hard. Very much so. Special super deluxe mega releases of games, which are made available in a limited number, can go for well over $100. Older and popular games on eBay and other gaming auctions can go for even more. Games that require players to continually invest in them (collectible card games and miniature Wargames, for example) will release products for purchase for as long as people pay for them. For the most part, game publishers know their audience and keep the prices for their games within a tolerable range.

Casual games can be found in big box stores (like Target and Wal-Mart) for prices that I would consider reasonable (around $10 to $20). The more components the game has and the closer the game is to targeting enthusiastic gamers, the price will go up. Which makes total sense. If the market is willing to pay more, the price for a higher end games reflects that.

Which is not to say that a game with a low price is a cheap game all around. If you like games as easy as LCR, expect to pay as little as $5. If you like games with lots of pieces, longer playing time, and detail, expect to pay $30 to $70).  If you shop online, you’ll be able to find deals and discounts. If you prefer buying from a local store, you can wait for coupons and sales. Just don’t rush it. If you’ve got the time, you can save a dime.

See Top 5 Ways to Get Games Cheap for even more ideas on how to grow your game collection on a responsible budget.

Oh, goodness no. Take a moment to review our Games by Type and you’ll quickly see how many different game types there are. There is truly something for everyone and even more games and ideas are being created and published every year. Now is a great time to get into board games because there has never been so much variety. Board games are even being made that are based off of current popular television shows and ones from the past. If you can imagine it, there is most likely a game that closely resembles it.

After playing games, you’ll start to pick up on similarities. For example, how dice are used to randomly determine outcomes and values, how components move around the game board, and cards are used to gather and trade. You might even find games that are strikingly similar to others you’ve played, but have a different theme. These are all part of the mix that creates an ever-expanding collage of games. Lucky for you, you won’t need to play all of them. Heck, there are many games out there that I want nothing to do with.

For each game you’ll play, you’ll learn more about what you want your next game to be. That might be a game you’ve already played or a new game you’ve heard good things about. In either case, games might share common characteristic, but each is unique.

Unless it’s a reprint. In which case, not so much.